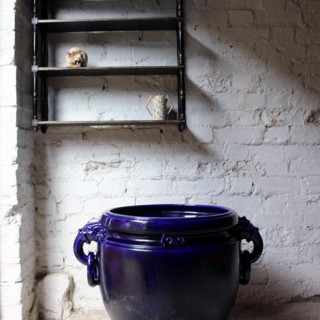 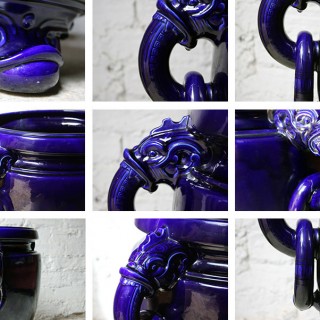 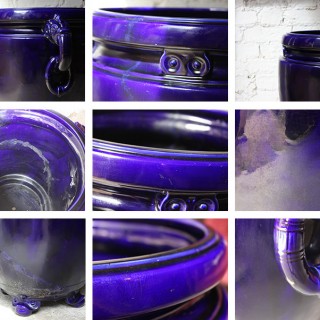 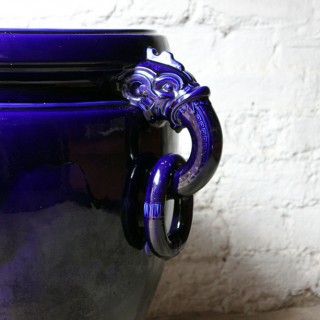 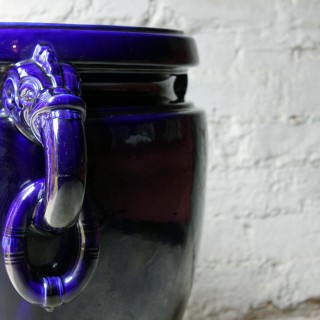 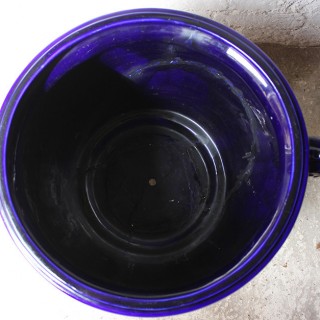 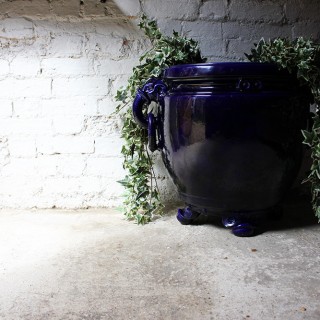 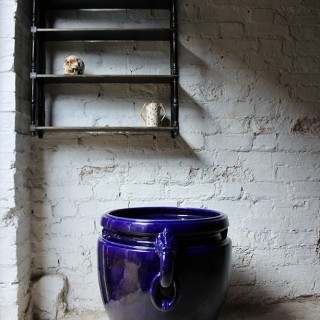 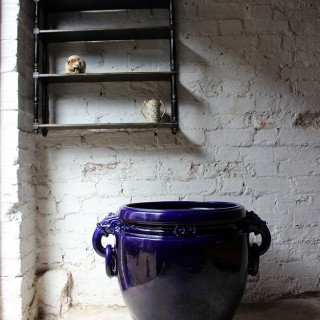 The jardinière stands true and its condition overall would be described as fair to good. The overall craqulure or crazing to the surface is beautiful. There are no losses or chips to the extremities, for example, to the handles or feet. The overall colour remains beautiful and the glaze strong to 70% of the body save a section of peeling to the glaze to one side. This is a result of some historic restoration to the main body, the cracks visible to the inside, with a forked rack running through it as per the photographs. The piece could easily be used and admired without further treatment though if one wanted to restore the piece further and eliminate the evidence of the crack and restore the flaking to the glaze to this section then one could of course do so.

Now merged with Royal Doulton, Mintons Ltd, was a major ceramics manufacturing company, originated with Thomas Minton (1765-1836) the founder of “Thomas Minton and Sons”, who established his pottery factory in Stoke-upon-Trent, Staffordshire, England, in 1793, producing earthenware and from 1798, bone china.

Dr. Christopher Dresser, always a believer in the triumph of the machine, of replication and progress once said; “The man who can form a bowl or vase well is an artist, and so is the man who can make a chair or table… the converse of the facts is also true; for if a man be not an artist he cannot form an elegant bowl, nor make a beautiful chair”. Although not stamped as such this piece is without doubt by Dresser with other pieces seen online being a testament to that.

Dresser was a designer, botanist and theorist, and his work was inspired, in part, by the arts of the East, particularly Japan. There is certainly an oriental influence here with Chinese bronze examples of jardinières in antiquity having similar handles as this piece that feature the elephant masks and rings. During his tenure at Mintons, Dresser worked as both an advisor and designer, As for this particular piece, we have found just three similar examples but with differing surface decoration, one being decorated with the Minton pattern No. 1643 G and stamped as such as being by Dresser. These are sitting on stands and are for sale at $118,000 USD. There was also another example in the USA that sold at auction with a differing pattern. Both of these other examples are of the same size as form as our example, the only difference being the design to the surface, which were both more intricate. The plain, yet exhilarating blue to this piece is more simple though wonderfully effective.

The most stately Victorian homes boasted an ‘exotic’ conservatory, or glass addition, which housed Victorian botanical enthusiasts and this piece would have been at home in such a room. Electrifyingly beautiful.