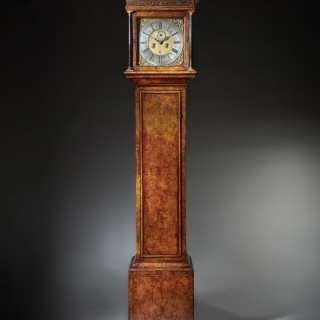 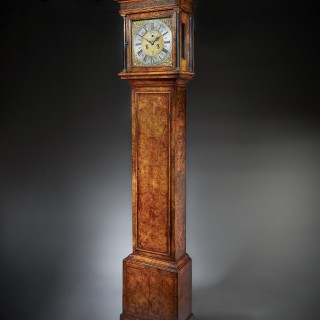 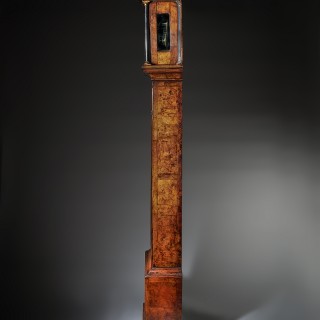 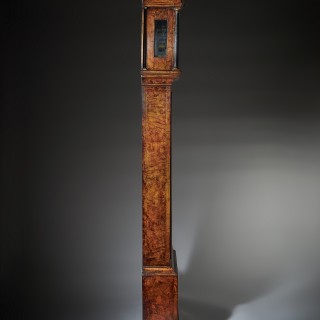 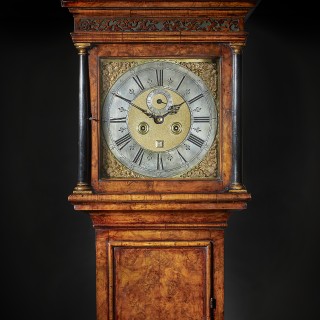 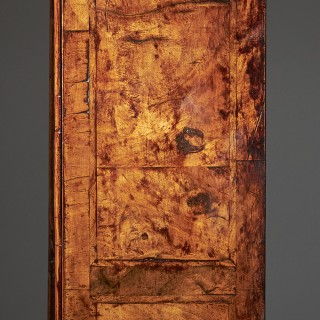 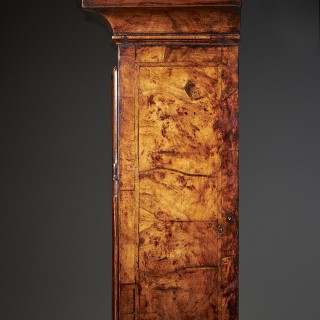 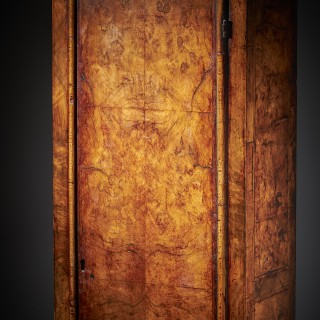 The exquisite burr walnut veneered oak case is of the highest quality, having a square hood and a trunk door framed with walnut D-mouldings. The hood has fine sound frets and is flanked by ebonised columns with gilt wooden capitals and bases. It has viewing windows to the sides. The base, which is in perfect harmony with the hood, has shallow stepped mouldings, typical of the period and a plinth at the bottom.

The eight-day movement has going and striking trains and is in remarkably original state. The going train has anchor escapement with seconds pendulum, while the striking is regulated by an inside count wheel. The beautifully executed 12-inch brass dial has a silvered chapter ring, a subsidiary seconds ring under the XII and finely engraved date aperture above the VI in the matted centre. The chapter ring has the classic division into Roman numerals with fine half-hour markers, an inner track with quarter-hour divisions, which adds to its elegance, and Arabic five-minute divisions on the outside. It is signed along the bottom Chr Gould London. The time is indicated by a fine pair of period blued-steel hands, the hour hand richly pierced. The winding holes are ringed whilst the corners are embellished by superb putti-and-crown spandrels.

The maker Christopher Gould was made a free Brother in the Clockmakers’ Company in1682 and referred to as great clockmaker. Strangely enough, it is not known to whom he was apprenticed, but it must have been one of the most eminent makers of the time, as Gould became a prolific and outstanding maker. He was married to Mary Rand in 1684, a second time in1702, to Jane Cosham. The couple had several children. Gould had a great number of apprentices. Apart from longcase clocks, for which he was most famous, he also made bracket clocks, lantern clocks, even for the Turkish market, hooded clocks and watches. He probably died in 1718.

Exquisite original condition and of exceptional colour. The movement has been beautifully maintained and serviced by our horologist.