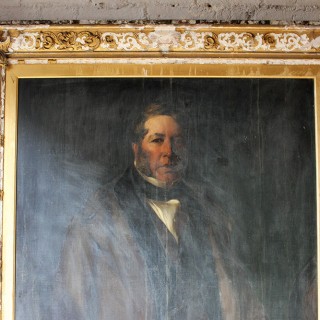 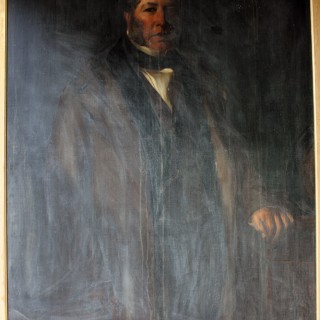 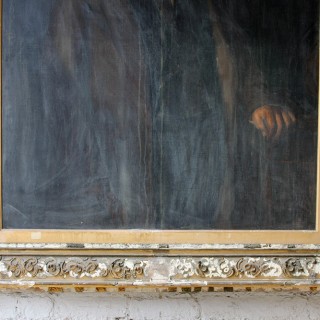 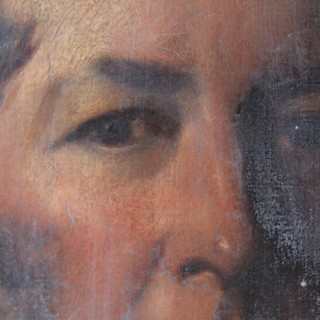 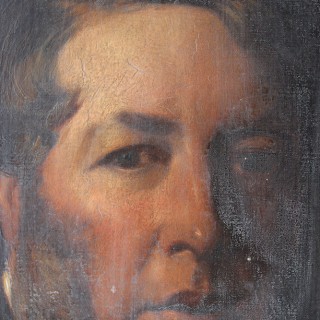 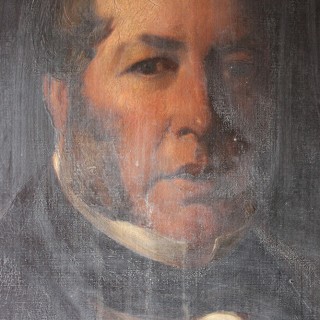 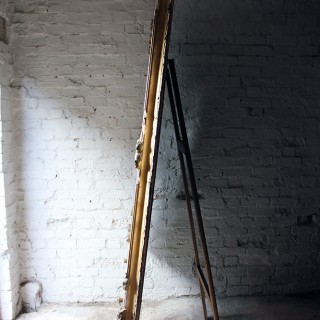 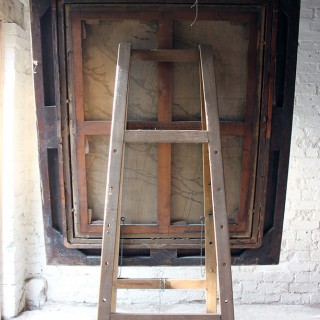 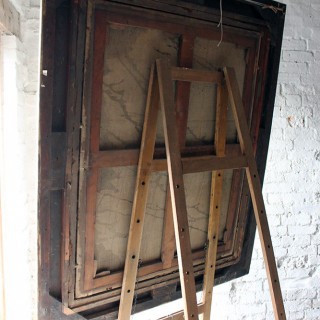 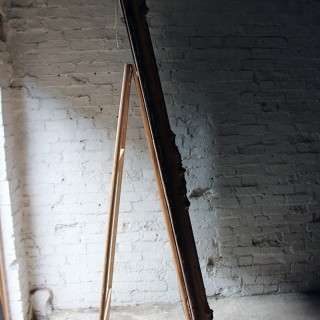 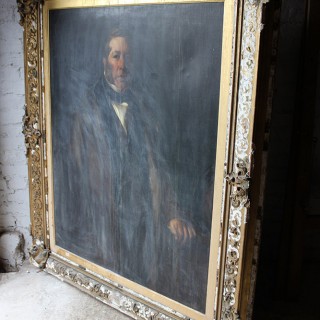 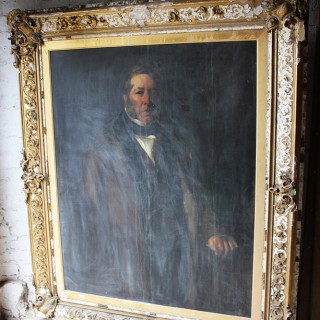 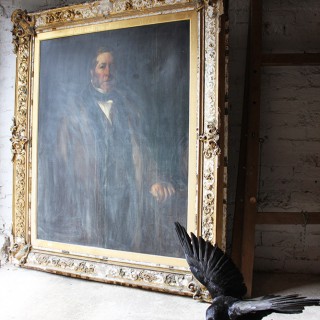 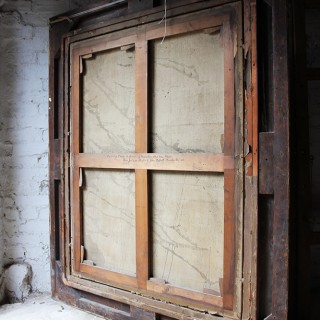 The condition of the painting is unrestored, uncleaned and is in as found order. It is dirty and would benefit from a clean but we try to leave these decisions to our clients. There are no areas of areas of loss or flaking, though the very good quality gesso frame has multiple losses. There is some craquelure but is it not harsh. The painting is decorative as is, having a rather haunting quality, but could be extensively cleaned and varnished to bring out the sitter if so deemed fit. We believe the smear to the canvas is probably due to gesso deposits from the frame.

The picture is very well executed, the skill in the level of detail is apparent even in this order, particularly to the veins in the sitter’s prominent face. His left hand rests on a large piece of furniture. The portrait would have been very expensive to commission at the time especially by this artist and Mr Williams would have wanted his power and wealth displayed by the way he stood and the expression he made.

In the year this was painted, 1854, the United Kingdom declared war on Russia thus joining the Crimean War, and an epidemic of cholera in London kills 10,000 people, whilst the year also saw the birth of Oscar Wilde.

John Callcott Horsley RA (29 January 1817 – 18 October 1903), was an English Academic painter of genre and historical scenes, illustrator, and designer of the first Christmas card. Horsley’s paintings were largely of historical subjects set in the seventeenth and eighteenth centuries, influenced by the Dutch masters Pieter de Hooch and Vermeer He was a member of the artist’s colony in Cranbrook. Horsley was born in London, the son of William Horsley, the musician, and grand-nephew of Sir Augustus Callcott. His sister Mary Elizabeth Horsley wed the famous British engineer Isambard Kingdom Brunel in 1836.

Horsley was mentored by William Mulready and Augustus Wall Callcot who sent him at age thirteen to study at Dr Henry Sass’s academy where he met D.G Rossetti, J. Millais and W.P. Frith; in his biography Horsley recalls Dr Sass as being vain and untalented. Following preparatory school Horsley studied painting at the Royal Academy schools where he met Thomas Webster. In 1836 he exhibited The Pride of the Village (Vernon Gallery) at the Royal Academy. Horsley was rector and treasurer of the Royal Academy from 1875 to 1890 and 1882 to 1897 respectively. He earned the nickname ‘Clothes-Horsley’ for his opposition to the use of nude life models.

Horsley married in 1854, the same year as this portrait was painted, which presumably helped pay for the ceremony! Indeed, it was in this year that he and his new wife toured the Midlands for five months to establish contacts with wealthy industrialists for portrait commissions. This is where he met Philip Williams and was duly commissioned to paint his portrait.

Philip Williams born on the 7th of January 1798, owned Wednesbury Oak Ironworks, which had for many years occupied a prominent position in the South Staffordshire iron trade, having been erected in the earlier part of the present century by Philip, who was at that time in partnership with Benjamin Gibbons. In 1816, Philip Williams became the sole owner of the Wednesbury Works, but at a later date he assumed his sons, Philip and Walter, as partners, and the firm thereupon took the style, which it has since retained, of Philip Williams & Sons. Mr. Walter Williams was a son of Walter, the brother of Philip Williams, and, on the death of the latter, in 1864, he was entrusted, jointly with his brothers, Joseph W. Williams and P. A. Williams, with the management of the works and collieries belonging to the firm, in which position he continued until the time of his death. Philip Williams was buried on October 17th at the age of 66, ten years after this portrait was painted in 1864 and was buried in Wednesbury at St Bartholomew.

The Wednesbury Oak Works have long been among the largest in South Staffordshire, embracing collieries, blast-furnaces, and finished ironworks. The firm also carried on for many years known as the Union Furnaces at West Bromwich, but some sixteen years ago this latter property was disposed of to the Stour Valley Coal and Iron Company, which was subsequently dissolved. The property then reverted to the original owners, who carried it on under the style of Philip Williams & Company, until the furnaces, having become antiquated, were discontinued.

Wednesbury itself was at the centre of a vast area of industrialisation, which greatly affected the landscape and everyday sights and sounds; “The stranger shudders as he beholds the scene. Far as the eye can reach it is a series of fires; there seems to be too much fire and too much fury to be ever put out again. The dread is that it must grow and spread beyond its flaming boundaries, till the whole realm be in a general blaze, which all its island waters cannot quench, and bonny England become a holocaust.”

Much like the ironworks themselves this picture has decayed and been all but forgotten in the ‘fury’ but unlike those dismantled works the portrait is still salient and its presence remains hard to ignore; this man is not going to be obsolete one feels. As such this is a picture with enormous authority, atmosphere, stature and quality; both of sitter and artist, which proves to be an eminent slice of Black Country, and indeed, industrialist history.