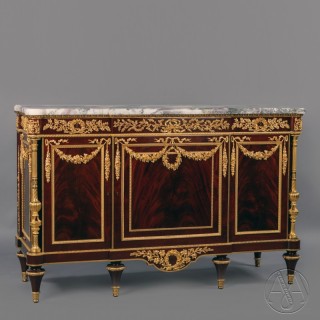 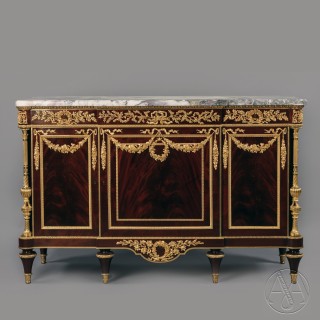 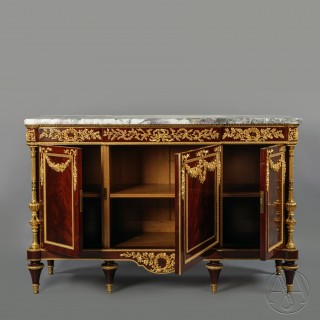 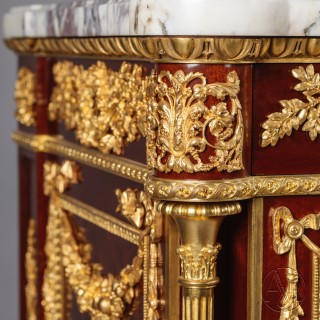 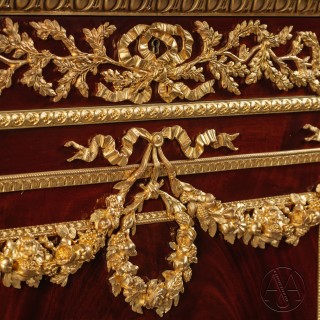 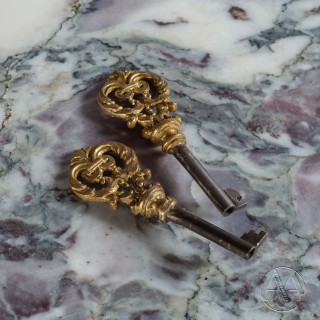 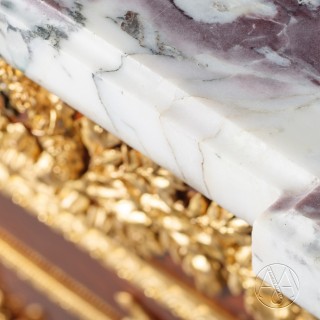 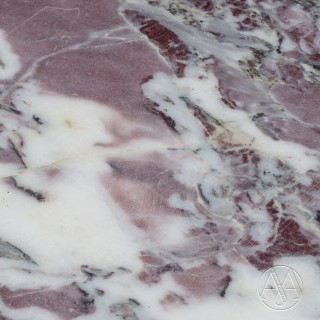 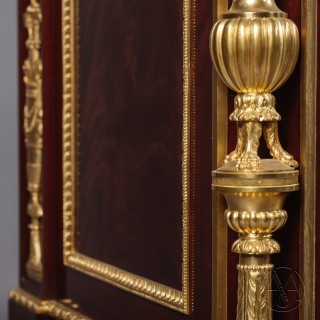 The lockplate signed to the reverse ‘Duvivier, Paris’.

The design for this elegant commode is taken from the celebrated lacquer model by Martin Carlin delivered in 1785 to Madame Victoire, daughter of Louis XV, for her use in the ‘grand cabinet’ at the Château de Bellevue and today in the collections of the Louvre (OA 5498).

This commode with its fine gilt-bronze mounts and superb quality of construction was undoubtedly made in one of the leading Parisian workshops towards the end of the 19th century. .A popular model versions were made by many of the most important haute luxe furniture makers of the period including Henry Dasson, Joseph Emmanuel Zwiener and François Linke.

The serrurier Duvivier is known to have made fine French locks for numerous premier haut luxe cabinetmakers of the late 19th century, including Henry Dasson, Maison Millet, Antoine Krieger and François Linke.

Henry Dasson
Henry Dasson (1825-1896) was one of the finest makers of gilt-bronze mounted furniture in the nineteenth century. Unlike other cabinetmakers of this time Dasson started his career as a bronze sculptor, and for this reason one of the characteristics of his work is the great quality of his bronze and more precisely of the chiselling.

With a workshop established in Paris at 106 rue Vieille-du-Temple, he specialised predominantly in the production of Louis XIV, XV and XVI style furniture using the very finest gilt-bronze mounts.

In 1871, he purchased the flourishing business and remaining stock of Charles-Guillaume Winckelsen, who had established a reputation for furniture of the highest quality. Dasson almost certainly inherited the craft of ciseleur from Winckelsen.

At the 1878 and 1889 Paris Expositions Universelles Dasson exhibited a number of pieces in the Louis XV and XVI styles, as well as pieces of his own modified eighteenth-century design. The exhibits in 1878 included a table entirely in gilt-bronze, purchased by Lord Dudley. His copy of the celebrated Bureau du Roi sold at the same exhibition to Lady Ashburton.

Dasson ceased production in 1894, and at this time held a sale of his models, listed in Catalogues of drawings for art bronzes, style furniture and important decoration with rights of reproduction by Henry Dasson et Cie, manufacturer of art bronzes and cabinetmaker as a result of cessation of production..’ The records from this sale show that Paul Sormani, as well as Joseph Emmanuel Zweiner, Maison Millet and Beurdeley acquired certain drawings and models by Dasson.

Jonathan Meyer illustrates a number of exceptional items exhibited by Dasson in 1889 in his book on the Great Exhibitions.

Martin Carlin
Martin Carlin was born in Germany in 1730 and emigrated to Paris to become an ébéniste. He was already active as an ébéniste by 1759, at which time he married Marie-Catherine Oeben, sister of the successful ébéniste Jean-Francois Oeben, for whom he probably worked until the latters death in 1763. Carlin died in 1785.

Carlin sold his works exclusively to middlemen such as the marchands-merciers Simon-Philippe Poirier and Dominique Daguerre. He was particularly known for his furniture decorated with Sèvres porcelain plaques, and in the early 1780’s with Japenese lacquer panels. His first recorded piece of porcelain mounted furniture dates to 1763, a bonheur-du-jour now in the Bowes Museum, Co. Durham. He worked from designs provided by Dominique Daguerre, for the foremost collectors of the day, including the French Crown. Carlin shifted his emphasis after 1778 to producing sumptuous furniture decorated with Japanese lacquer, for the Merchands.