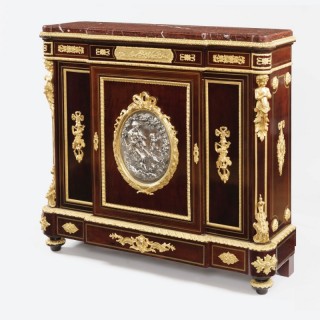 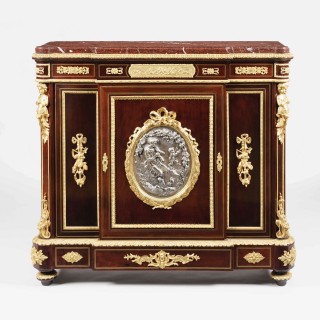 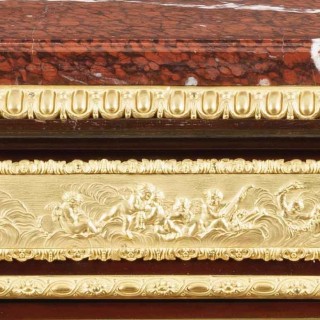 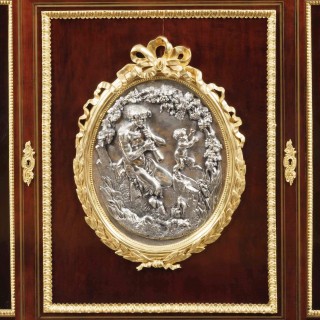 A Fine Meuble d'Appui by Vedder of Paris

A Fine Meuble d’Appui by Vedder of Paris

Constructed from gently patinated mahogany with brass-inlay to the edges, the cabinet of breakfront form resting on decorated toupie feet to the front, the canted corners carrying ormolu scrolled ornament and caryatid herms flanking a central door dressed with a silvered bronze plaque depicting satyrs dancing and playing the flute. The frieze applied with ormolu mounts and brass inlays below a shaped Griotte Rouge marble top inset within an egg-and-dart border. The lock plate bearing the maker’s signature “Vedder, à Paris.”
French, circa 1860

Maison Vedder was first established by Jean-Frédéric Vedder in 1842 and swiftly attracted the well-to do Parisian clientele following his participation in the 1844 exposition two years later where he was awarded a bronze medal. Specialised particularly in furniture incorporating various inlays and surface decoration such as porcelain plaques, bronze work, and ebony inlays, Vedder was likewise known as a capable restorer of Boulle marquetry work. His participation in the 1849 exposition in Paris saw him awarded the silver medal. Succeeded by his son, the firm stayed active in Paris until 1876 with various addresses around the Place des Vosges, the oldest planned square in the city.

A Fine Meuble d'Appui by Vedder of Paris