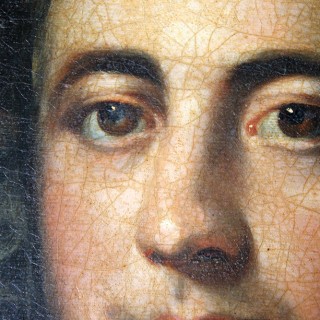 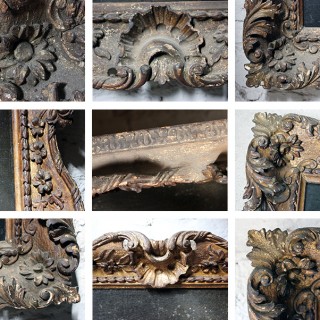 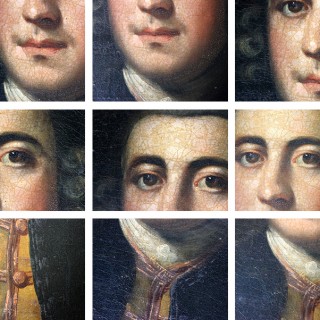 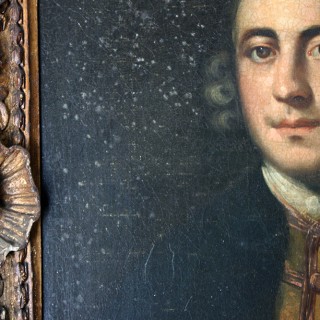 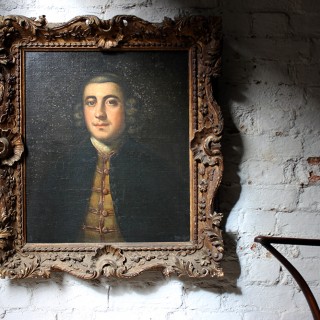 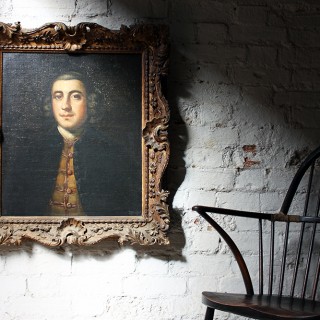 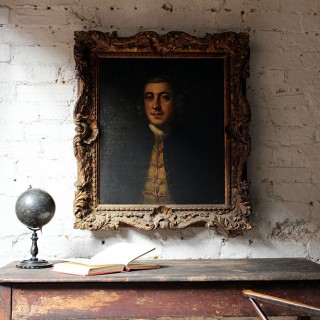 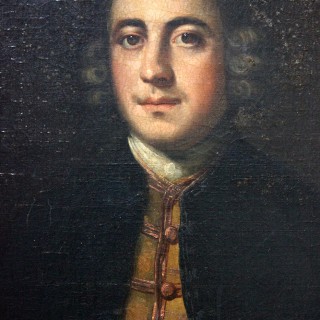 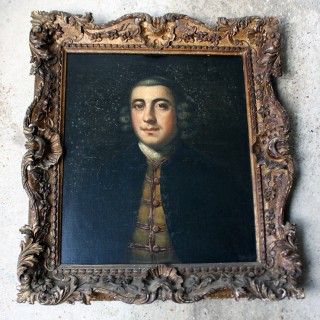 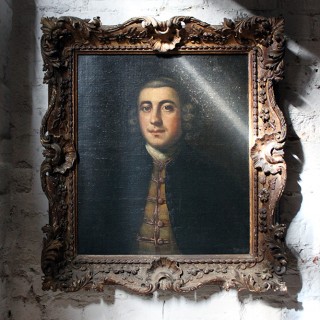 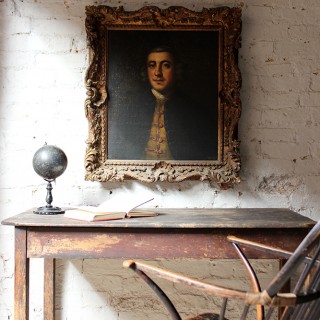 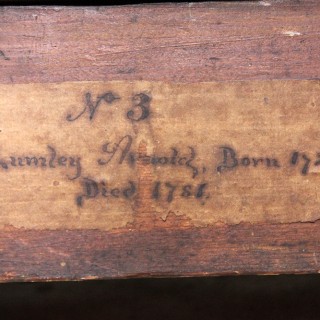 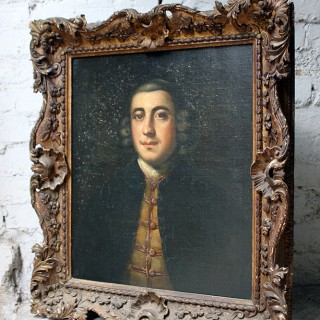 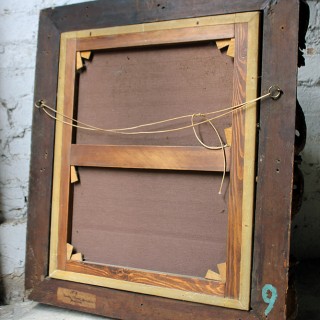 The captivating provincial school oil on canvas portrait of Lumley Arnold, of Ashby Lodge, Northamptonshire (1723-81), housed in the superb original gilt gesso ornamental frame, the sitter shown at head and shoulders length depicted on a dark background in his finery of a velvet doublet over a buttoned silk waistcoat, with white cravat, looking directly out to the viewer, his face benevolent and full, the composition surviving from the second quarter of eighteenth century England.

The Coape-Arnold family by Descent.

Lumley Arnold was born in 1723 to George Arnold and Anne Arnold; he had three sisters and two other siblings. He married Anne Arnold circa 1752, at age 29 and they had one son: George Arnold. Lumley Arnold was given a gentleman’s education at Queens College, Oxford and the Inner Temple, and became a practicing barrister; and Hogarth’s portrait of his daughter Frances demonstrates that his daughters were correspondingly equipped with poise and the social graces.

Hogarth also vividly portrayed George Arnold, his father, as a larger-than-life character, but his son Lumley comes across from his will as a less sympathetic figure. It has been suggested that Hogarth also painted Lumley Arnold himself – see Hogarth The Painted, 40, catalogue 17, ‘Unknown Gentleman in Grey, Holding Gloves’ – this painting came to light in an auction in 1989, beard a striking resemblance to the Arnold portraits in style, pose, and colouring, and it has been suggested that it shows the barrister Lumley Arnold (1723-1781) although the connection is unproven.

He had only one child, his ‘damnable and undeserving son’ George Arnold (1753-1806), who nevertheless inherited all his real property. He lived at Arnold’s Yard, Upper St Martin’s Lane, London until he inherited the Ashby Lodge estate from his father in 1766, about when this picture would have been painted. In 1762 Lumley Arnold’s premises included ‘Horse Standings’, a counting house, and a dwelling house where he lived, which were assessed for rates at £100—over five times as much as any other property on this side of Upper St. Martin’s Lane. He died on the 5th of May at the age of 58, and was buried at Ashby St Ledgers, 29 May 1781, whilst his wife died on the 12th August and was buried at Ashby St Ledgers, 20 August 1774.

A picture that has an awful lot going for it; a super provenance, super decorators appeal and wonderfully original condition.

The picture has been relined at some stage and is in otherwise unrestored condition and does not suffer from any major losses showing an even amount of craquelure to its surface mainly visible to the face. There are a few very minor areas of flaked loss, with some spotting largely visible to the ground, and it remains un-cleaned and in very original order. The painting is apparently unsigned. A clean may bring out more of the colour in the picture but we prefer to leave these decisions to the eventual buyer and its country house condition is appealing. The original frame’s quality is superb and proves valuable in its own right with it being also unrestored and uncleaned it is immensely evocative. There is a label to the reverse of the frame in handwritten ink reading No.3 Lumley Arnold, Born 1723, Died 1781”. The picture comes from the Coape-Arnold family by descent.