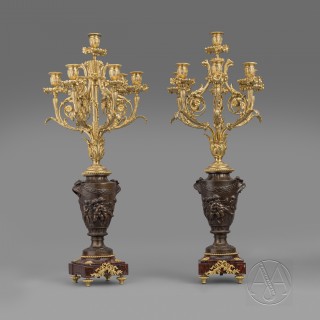 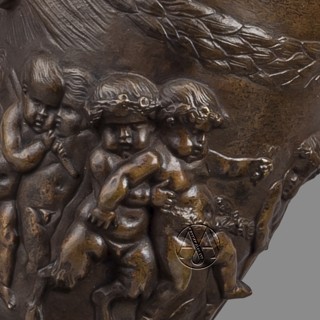 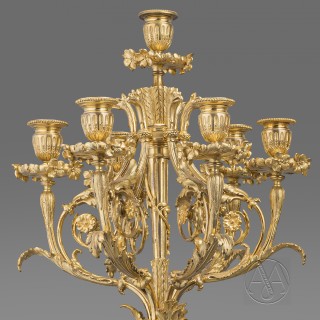 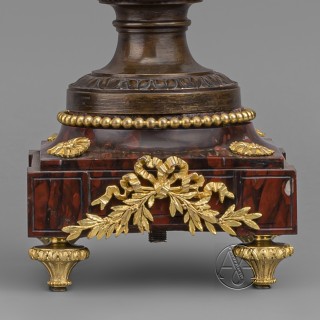 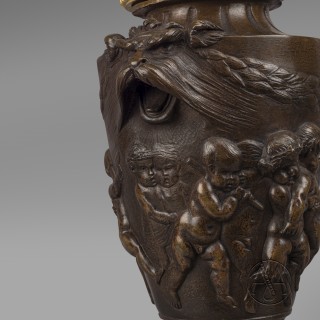 A Fine Pair of Gilt and Patinated Bronze Seven-Light Candelabra, After A Model By Clodion, Cast by Suse Frères.

The candelabra are in the form of patinated bronze vases cast in a classical form after the model by Clodion, with masks depicting chimerical ibex flanked by laurel swags, above a finely carved relief of young Bacchanals at play. The vases are surmounted by acanthus collars with central stems issuing scrolling foliate cast candlearms with eagle head finials and terminating in fluted circular nozzles. Each vase is raised on a fluted circular soccle put down on a square section re-entrant red marble base with gilt-bronze foliate mounts and toupie feet.

The patinated vases, cast with a classical iconography which blends architectural elements of antiquity with the sensibility of the ‘ancien régime’ are after a model by the celebrated sculptor Clodion (1738-1814), made during his time at the French Academy in Rome from 1762 to 1771. One noted terracotta example, formerly in the collection of the princely Russian Dolgoroukov family, is now in the Hermitage Museum, St. Petersburg (H.CK-2093), exhibited at the Clodion exhibition, musee du Louvre in 1992. A related example in marble, notably in the treatment of the masks, is in the Wallace Collection, London (S32).

Clodion’s design for this pair of vases may have been influenced by a chalk drawing for a vase by François Boucher from circa 1761-1762 in which we see Bacchanalian parades and acanthus detail that is similar to Clodion’s vase designs. François Boucher (1703 – 1770) was the leading French artist working in the Rococo style and possibly the most celebrated artist of the eighteenth century, most known for his idyllic paintings on classical themes. It is possible that this drawing served as inspiration for Clodion when designing his vases, which were executed in various versions between 1763 and 1785 and continued to be adapted well into the nineteenth century by later artists.

A similar design of vase appears in several of Boucher’s paintings, including Earth: Vertumnus and Pomona from 1749, now in the Columbus Museum of Art, Ohio (Reference 1980.027). Boucher had a strong impact on Clodion, who perhaps sculpted works after his drawings, supported by the fact that three paintings were included in Clodion’s personal inventory upon his death in 1814, “trois tableaux de Boucher représentant jeux d’enfants, peints sur bois, prises ensemble 3 fr”.

Tracing its origins to 1758, the Paris foundry of Susse Frères is one of the oldest art foundries in Europe. They were appointed suppliers to Empress Marie Louise from 1812 and the Duc de Berry from 1818. Following the 1830 revolution they were granted a Royal Warrant as an official supplier to the monarchy. Originally a stationery company selling small bronze statuettes, the company began to focus on the process of bronze casting as early as 1839 under the direction of the brothers Michel Victor and Amedee Susse. They producing in that year a six-page catalogue of bronze sculpture.

In 1847 they obtained the right to use the Sauvage procedure for reduction, similar to that invented by Achille Collas and employed by Ferdinand Barbedienne. The ability to produce reductions of large scale bronzes enabled Susse to create editions of work in various sizes and opened up the market to collectors. Michel Victor Susse died in 1860 leaving Amedee as the sole director of the foundry until 1880 when Albert Susse became the director.

In the subsequent years Susse Frères obtained the rights to produce editions of the works of some of the most important French sculptors of the nineteenth century including: James Pradier, Pierre-Jules Mêne , Auguste Cain , Pierre-Nicolas Turgenev , Yevgeny Alexandrovich Lanceray, Louis-Ernest Barrias , Jules Dalou , Alexandre Falguière and Mathurin Moreau.

Renowned for the quality of its casting and multipatinated finishes, the firm of Susse Frères exhibited with notable success at many of the great exhibitions of the nineteenth century including a prize medal at the 1851 Great Exhibition in London and a Grand Prix at the 1905 Lieges Exposition Universelle.

The son-in-law of sculptor Augustin Pajou, Clodion, (Claude Michel), (1738-1814), trained in Paris in the workshops of his uncle and Jean-Baptiste Pigalle, the most successful sculptor of the time. After winning the Prix de Rome, he moved to Italy, sharing a studio with Jean-Antoine Houdon and studying antique, Renaissance, and Baroque sculpture.

In 1771 Clodion returned to Paris, where he continued to produce mostly in terracotta. He also worked with his brothers in other media, decorating objects such as candelabra, clocks, and vases. Drawing primarily from pagan antiquity, he created light-hearted terracotta sculptures that epitomised the Rococo style. Late in his life, when Neo-classical works were more popular, Clodion adjusted his style and worked on major public monuments in Paris.

after clodion cast by suse frères