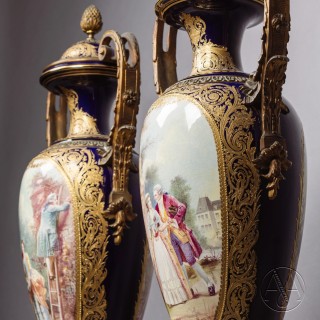 Each vase is of amphora form with domed covers, scrolled handles and square section re-entrant gilt-bronze plinth bases. The body of each vase is of cobalt blue ground enriched with fine gilt tooling and centred to the front with a finely painted cartouche of a pastoral scene in the eighteenth century manner of Watteau and to the reverse with a landscape. The inside of each cover inscribed in underglaze red ‘Offert par le Duc de Richelieu a Madame Campan’, under interlaced ‘L’s’ in blue.

The popularity of the Louis XV style during the nineteenth century led to a number of companies in and around Paris, creating exceptional Sèvres-Style porcelain based on eighteenth century models and to the same exceptional quality. Often these pieces were of exhibition quality and scale, and finely painted by the best studio painters of the day such as Robert, Desprez and Poitevin.