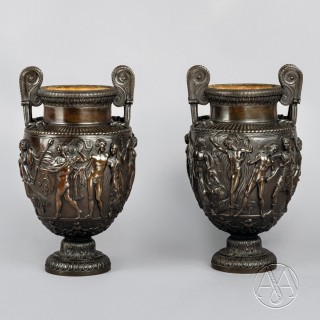 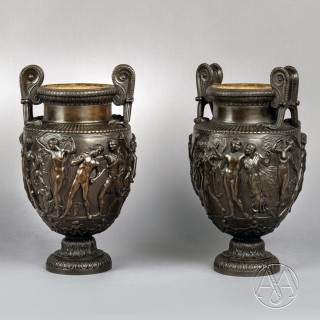 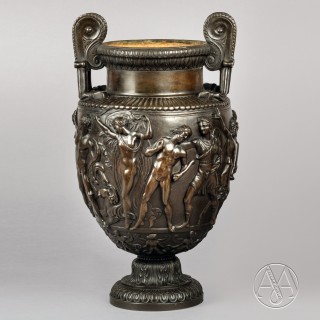 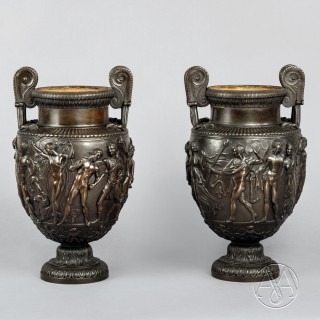 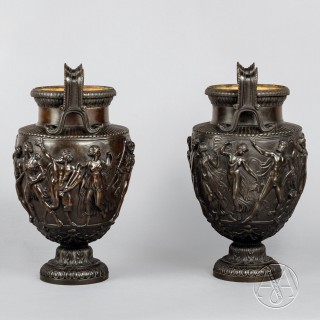 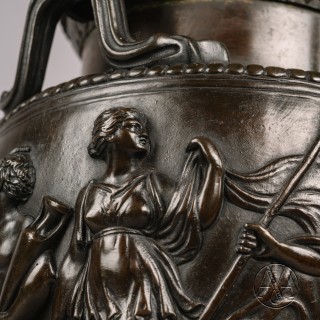 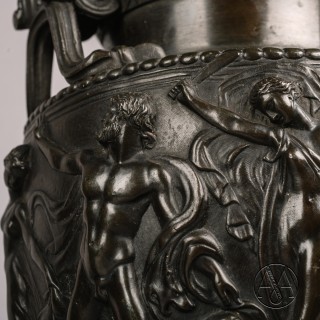 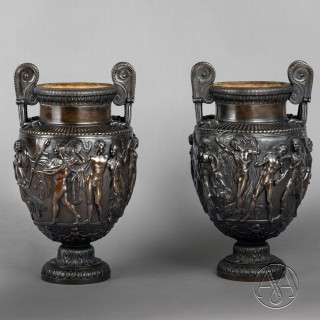 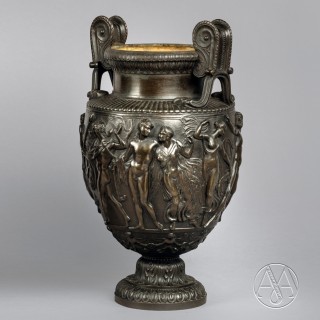 A Fine Pair of Patinated Bronze Models of the Townley Vase

A Fine Pair of Patinated Bronze Models of the Townley Vase, Cast After the Antique, by Auguste-Maximilien Delafontaine.

The bronze stamped to the underside ‘AD’ for Auguste-Maximillian Delafontaine.

Each vase is of krater form with elaborate scrolling pierced bifurcated volute handles and palmette cast necks; the ovoid bodies are cast in high relief with a Bacchic frieze and raised on lotus and palmette circular pedestal bases.

This exceptional pair of patinated bronze vases, with their distinctive volute handles and Bacchanalian frieze are cast after the celebrated Townley vase now in the British Museum. The frieze which is cast in high relief depicts a procession of Bacchic revellers including Bacchus and Ariadne, accompanied with various symbols, relating to the Eleusinian Mysteries.

The Townley Vase is a large Roman marble vase dating from the 2nd century CE, discovered in 1773 by the Scottish antiquarian Gavin Hamilton when excavating the Villa of Antoninus Pius at Monte Cagnolo, between Genzano and Civita Lavinia, near the ancient Lanuvium, in Lazio, southeast of Rome. Its name comes from the important English collector Charles Townley, who purchased it from Hamilton in 1774 for £250. Townley’s collection, long on display in his London house in Park Street, was bought for the British Museum after his death in 1805.

The foundry was established in Paris in the late eighteenth century by Jean-Baptiste-Maximilien Delafontaine and, by 1870 is listed as being located at 10 Rue de l’Universite.

The Delafontaine foundry produced decorative works of art of the highest quality and was one the the most renowned of all the Parisian foundries. They were the main competitor to the Barbedienne foundry, casting works by some of the leading sculptors of the nineteenth century including Antoine-Louis Bayre, James Pradier and Mathurin Moreau. Works cast by Delafontaine remain in the collection of the Louvre and other leading museums.

Auguste-Maximilien Delafontaine, 1813-1892, was the grandson of the founder, and during his time at the foundry pieces were stamped ‘AD’ to the reverse on the bronze work.

Auguste was succeeded by his son Henri-Maximilien in 1884 and the foundry closed its doors in 1905.

A Fine Pair of Patinated Bronze Models of the Townley Vase