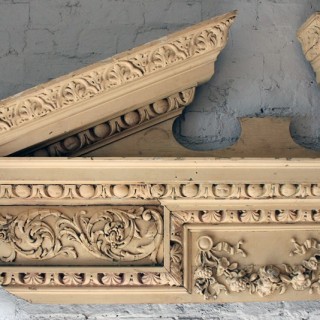 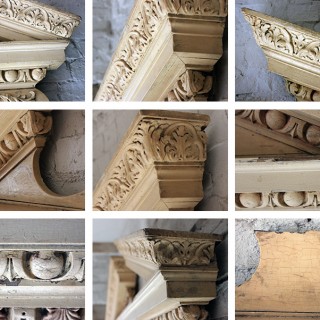 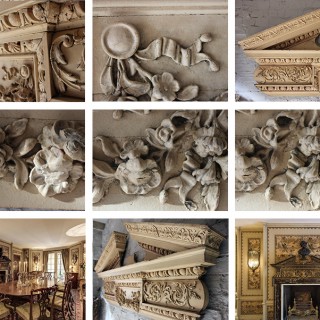 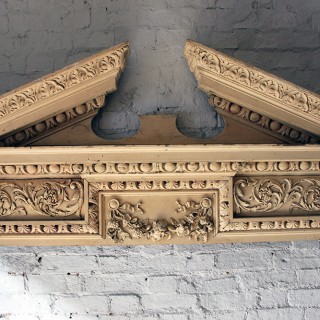 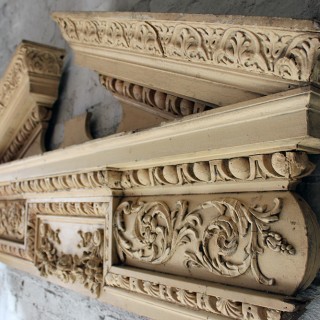 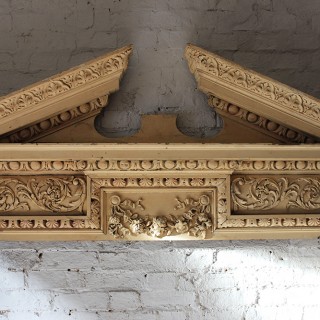 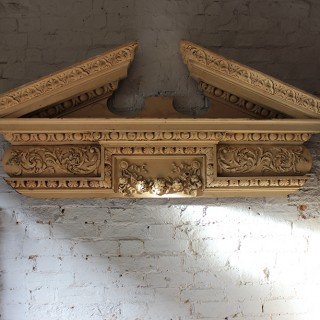 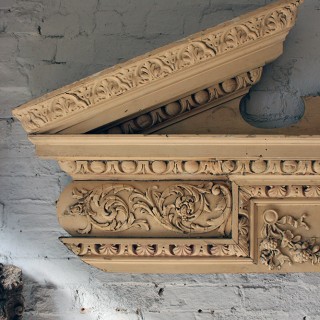 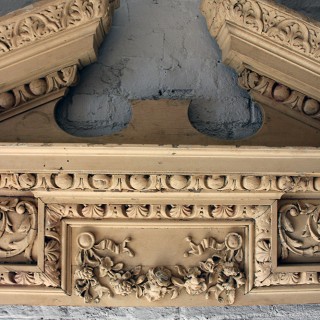 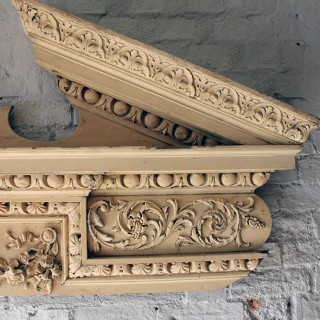 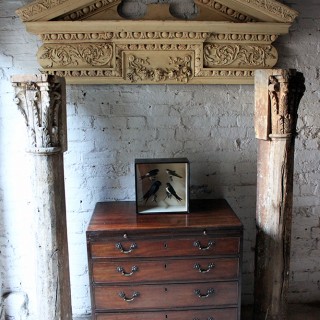 The fine Georgian gesso and carved pine over-door broken pediment cresting with egg and dart and floral tracery and swag mouldings, showing several layers of old paint, removed from an important London house by repute being of No.2 Wilton Crescent, Belgravia & the Earl Mountbatten.

Formerly of No.2 Wilton Crescent, Belgravia & the Earl Mountbatten, by Repute.

The vendors of this piece from Sandbanks are property developers and hence when they took over the property they were at liberty to remove pieces and they still have retained a fireplace that they removed from the same address, and they use it in one of their own homes.

The three most expensive Crescents in London are Wilton in Belgravia, Hans in Knightsbridge and Pelham in South Kensington. One home in Wilton Crescent recently sold for a staggering £32million. Wilton Crescent was created by Thomas Cundy II, the Grosvenor family Estate surveyor, and was drawn up with the original 1821 Wyatt plan for Belgravia. It is named after the 2nd Earl of Wilton, second son of the 1st Marquess of Westminster.

The street was built in 1825 by William Howard Seth-Smith. In the 19th and 20th centuries, it was home to many prominent British politicians, ambassadors and civil servants. Louis Mountbatten, 1st Earl Mountbatten of Burma (1900–1979) lived at 2 Wilton Crescent for many years, which is where this pediment is said to have been removed from and today, there is a blue plaque on the house marking it. Like much of Belgravia, Wilton Crescent is characterised by grand terraces with lavish white houses which are built in a crescent shape, many of them with stuccoed balconies, particularly on the southern part of the crescent. We have no reason to doubt the provenance of this piece and it fits perfectly well stylistically to the age and period of the building. This particular pediment is similar to a door case from Hatton, circa 1735. The photographs show another property in Wilton Crescent with a similar pediment but redecorated and placed over a fireplace.

A truly beautiful and important architectural element that could be integrated into the fabric of a room or simply hung over an existing door way. Stunning.

The overall condition of the pediment is relatively good, with some losses to the whole, with the central shell cresting presumably present, missing. It remains sturdy and in one piece though the mouldings are fairly delicate. There is some small loss to the gesso mouldings and flaking to the paint of which there is at least three layers, all being different tones of ivory. We have added some hanging hooks and brace struts to the rear in appropriate places for the purposes of wall hanging of the piece.