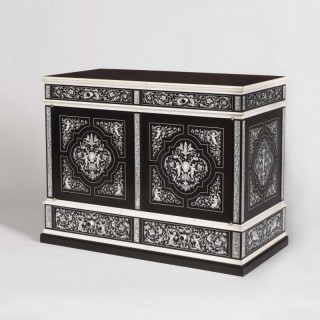 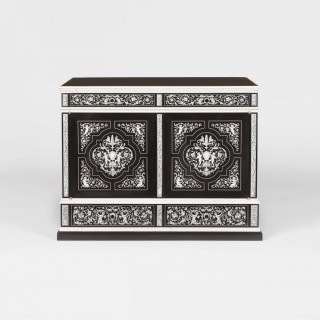 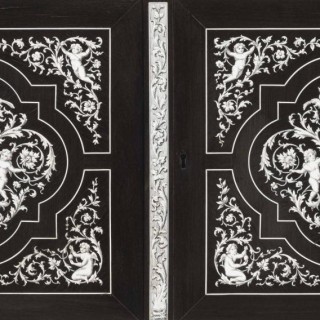 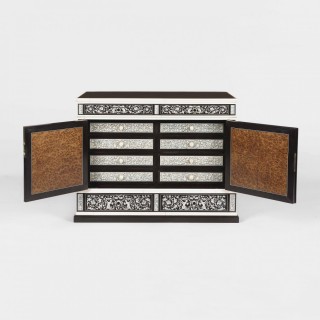 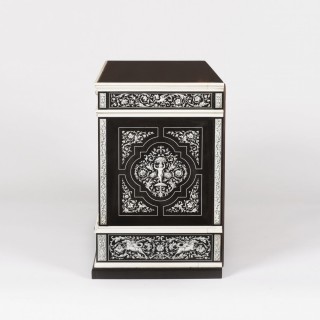 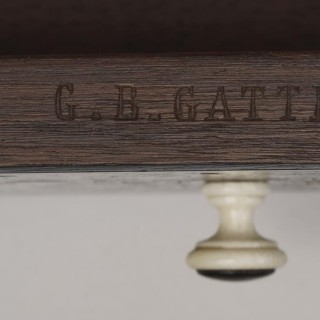 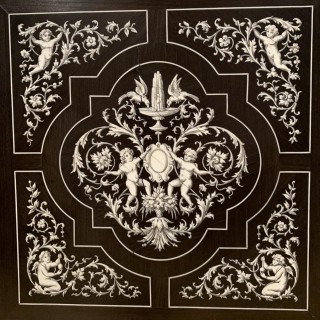 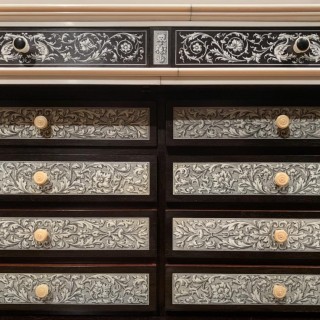 The ivory inlay being laid down on an ebony ground, the front having four drawers and two doors having thuya veneer on the interior revealing eight drawers within, each with marquetry fronts; all with ivory turned handles. The whole intricately decorated with scrolling foliage of rinceaux form interspersed with grotesques, birds, fountains, flowers and winged putti. The frieze drawers flanking a central cat’s mask indicative of the artist. Bearing a paper label to the back depicting an unknown man, presumably Gatti himself. Stamped twice to the bottom drawer fronts ‘G.B. Gatti.’

Gatti was of the most distinguished European intarsia artists of the 19th century. Having studied in Rome and Florence, he worked as a journey-man cabinet-maker before establishing his own workshop at Faenza in the 1870’s specialising the Milanese intarsia manner with ivory on a background of ebony. Ill health saw him ceasing work in 1881. Working in the Renaissance Revival manner pioneered in the first half of the century by craftsman such as Pietro Bertinetti, Gatti and his Italian contemporaries helped to establish this style as a dominant aesthetic mode in the 1860’s and 1870’s. He enjoyed the support of imperial, aristocratic and ecclesiastical patrons in Europe including the Austrian Emperor, the Duke of Hamilton and Cardinal Amant, and was also popular amongst American industrial collectors such as Wright E Post and William Gilstrap. Examples of his work are found not only in the Victorian and Albert Museum, but also in the Nelson-Atkins Museum, Kansas City, and the Minneapolis Institute of Arts. Gatti’s spectacular inlaid exhibition pieces gained him numerous awards at Europe’s international industrial and cultural expositions: at the ‘Paris Expositions Universelles’ (First Class Medal 1855; diplome d’honneur, 1867; Gold Medal 1878) and at ‘Vienna’s Internationalische Ausstellung’ (1873) Gatti, whose name translates from the Italian as ‘cats’, occasionally incorporated a cat into his complex work