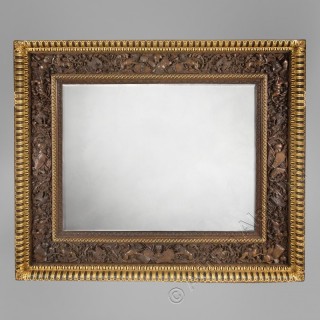 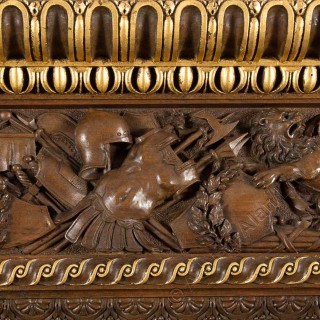 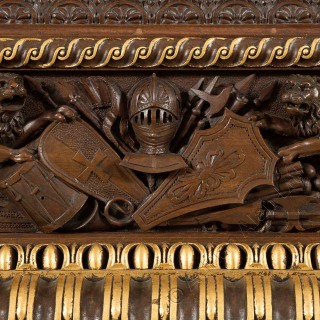 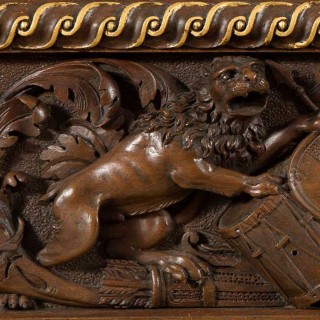 This important mirror has a rectangular bevelled mirror plate within an elaborately carved surround with stiff leaf and guilloche bands and a moulded egg and dart and out-scrolled fluted edge, framing a relief carved frieze decorated with scrolling foliage, wild animals and military trophies.

Angiolo Barbetti (1805 – 1873) was a skilled carver, designer and decorator, with a flourishing atelier in Florence during the nineteenth century.

After working in his father Massimiliano’s atelier in Siena, he took up an apprenticeship with Giovacchino Guidi (d. 1842), considered one of Siena’s finest ebenisti. By 1826-7, he had established a workshop on the Piazza San Giovanni, Siena and in 1830 exhibited his first works at the Istituto delle Belle Arti, Siena.

In 1842, Barbetti moved his workshop to Florence, establishing himself near the ponte alle Grazie. Important commissions from this period included carvings for the interiors of Villa San Donato for Prince Anatoly Demidoff.

Barbetti took part in many of the international exhibitions of the second half of the nineteenth century, including the 1851 Great Exhibition in London, where he was awarded a medal for a suite of carved walnut furniture. Following the exhibition, the suite of furniture was purchased by the South Kensington Museum, now the Victoria and Albert Museum, where it remains today.

Joined in the business by his four sons Rafaello, Egisto, Ottavio and Rinaldo by the beginning of 1860, the firm of Barbetti continued to find international success exhibiting successfully at the 1861 Florence exhibition, the 1867 Paris Exposition Universelle and the Vienna Exhibition of 1873.