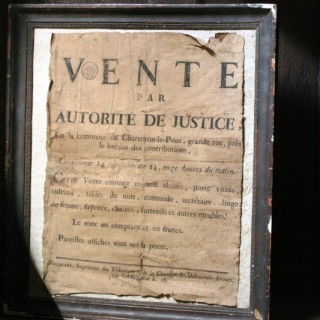 The Napoleonic period French paper bill or notice, relating to a house sale clearance in Charenton-Le-Pont, Paris, with the Gregorian calender date of Messidor 13, for July the 13th 1805, the bill surviving in good condition considering its fragility and framed in a period painted frame.

The bill states that the sale is commencing by justice authority at 11am with the sale consisting of an alcove, glazed porch, curtains, chest of drawers, dressers, secretares, linen, chairs, bedside tables and other furniture and if bought to be paid in cash in francs.

The year of 1805 in France saw many battles under the mighty Napoleon including the famous battle of Trafalgar, the decisive British victory over the French and Spanish Navies in October, three months after this bill was printed. This year also saw Sweden declaring war on France and the creation of the spirit absinthe.

A beautifully time worn piece of ephemera that has defied all odds to survive.

The document is in good condition considering its 215 years of age with some small tears and wear as photographed. It could be glazed to protect it. The frame is associated though is of good age.