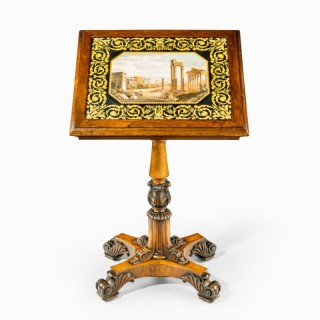 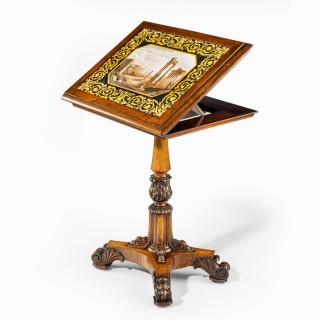 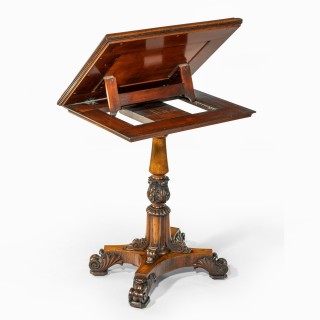 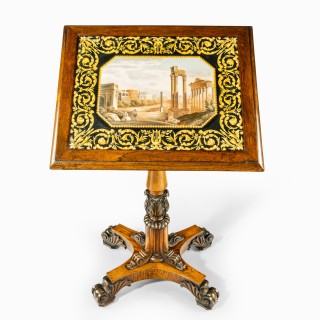 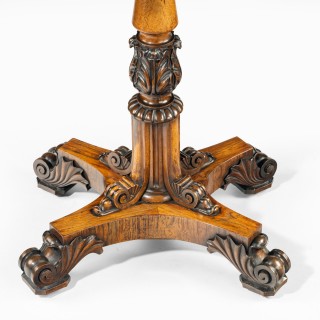 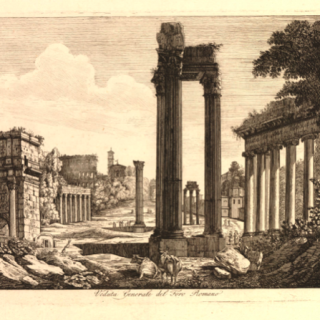 The rectangular top of this table tilts up to display a scagliola landscape scene showing the ruins of the Roman Forum, the Temples of Vespasian and Saturn, the Column of Phocas and a stylised version of one of the triumphal arches in Rome, all within gilt beaded and scrolling foliate borders on a black ground. The image on the panel is based on the print Veduta Generale del Foro Romano by Luigi Rossini from his series Le Antichità Romane published in 1817.
An impression of the print in the collection of the British Museum, registration number 1935,0520.80

As can be seen by close comparison of the images, the Della Valle workshop made subtle changes to Rossini’s composition, adding figures to the foreground, removing the cattle and generally scaling back the trees and foliage on the right hand side of the composition amongst other changes. There is absolutely no doubt that this was the source image for the table top however and that helps to further establish a likely time frame for the construction of the piece.
The scagliola panel has a rosewood surround with moulded edges set on a baluster support above an acanthus carved shaft descending to four scroll supports, the quatre form base on four winged volute feet, with recessed castors. English, circa 1825.

The top is almost certainly by Pietro Della Valle. A very similar table in Woolley and Wallis, Salisbury, carried the paper trade label for Peter Della Valle & Brothers, Manufactures & Painters of Scagliola, Per Porta Cappuccini, Leghorn. The Peter della Valle brothers were accomplished Italian artists in scagliola, with workshops in Livorno (or Leghorn as it was known in English) on the Ligurian coast. One famous example of their work is a scagliola top of a table exhibited by the brothers at the Great Exhibition of 1851. Having previously been on loan to the Los Angeles Museum it now forms part of The Gilbert Collection in London. See Anna Maria Massinelli, ‘The Gilbert Collection, Hardstones, pub. Philip Wilson, 2000’ exhib. 33 p.103
Provenance

The collection of John Evetts, Furnishing Manager of the Landmark Trust, whose family lived at Wormington Grange for four generations.