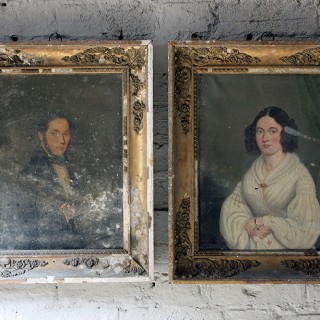 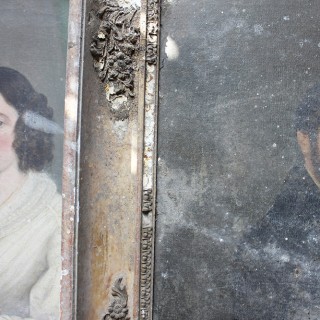 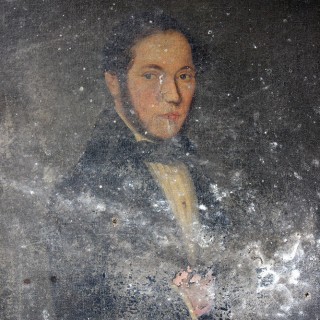 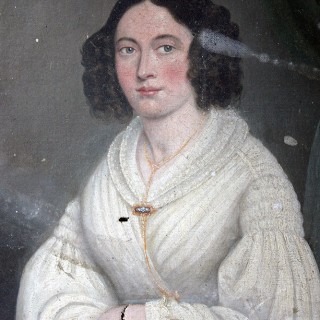 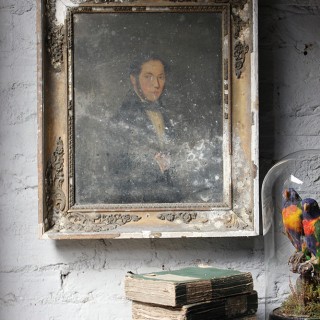 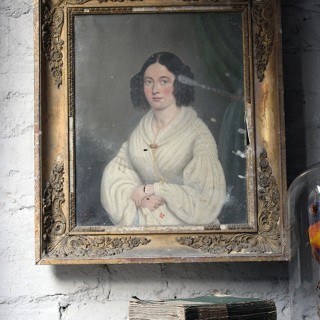 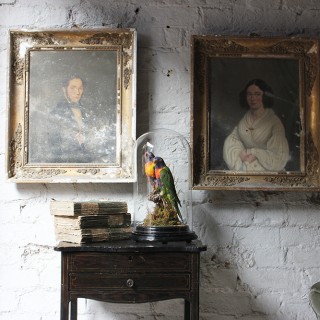 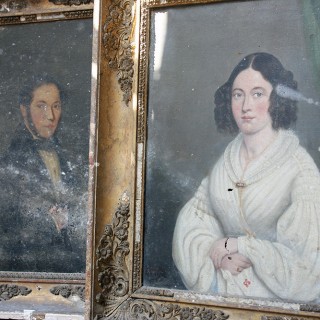 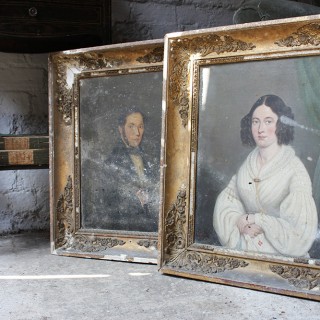 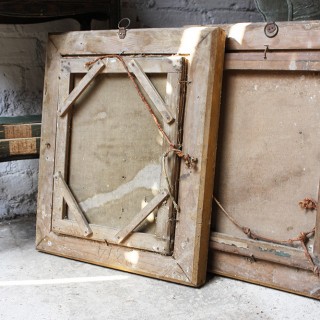 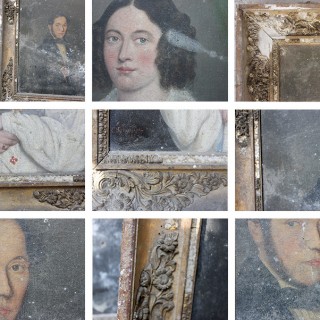 A Good Pair of c.1842 French School Provincial Oil on Canvas Portraits of a Gentleman & His Wife

The mid-nineteenth century French school depictions of a gentleman and lady, presumed man and wife, shown half-length and painted in oils on canvas and presented in their original gilt and gesso frames, one being signed ‘C.Chollol 1842’, survive from Louis Philippe period France in attic condition.

The pictures are in tired order though prove very decorative and they are wonderfully beguiling and evocative in this untouched condition. The pictures and frames are both in undeniably decorative, literally left untouched for the last 173 years, there is a commensurate amount of craquelure across both canvases and the frames, which are of good quality have losses. The pictures are very dirty with dust and splashes of plaster and gesso from the frames having been deposited onto them and if cleaned would become something entirely different, but it is in this condition that we simply love, their faded grandeur is matched by the original frames, the entire composition talks to you, or rather screams, of country estates and abandoned chateaus. The patination is simply wonderful to both elements.

The year of 1842 in France saw the Versailles train crash at Meudon, resulting in the deaths of at least 55 passengers whist in the UK Queen Victoria made the first train journey by a reigning British monarch, on the Great Western Railway.

The artworks, both on dusty green grey grounds show a gentleman probably in his thirties in a dark suit, white pleated shirt and black cravat. His firm and steady gaze is serious but one can sense a humility, the portrait wanting to convey a masculine astuteness.
The lady, probably slightly younger than her husband, wears an ivory pleated dress with lace adornments and a long gilt necklace with a sapphire cabouchon and a gold ring. There is a curious red symbol to the bottom of her dress which may be the families heraldic crest; it isn’t clear whether it is part of the dress or not. She is fairer skinned than her husband, probably taking in less port wine we suspect, but she shares the same steady gaze, though exuding more of a sense of kindliness, one can sense a motherly, nurturing disposition at play. Both portraits are clearly designed to present the sitters in a favorable light, honorable and strong but kindly and charitable at the same time.

Surely to remain untouched these achingly beautiful portraits are our favourite pair yet.

A Good Pair of c.1842 French School Provincial Oil on Canvas Portraits of a Gentleman & His Wife