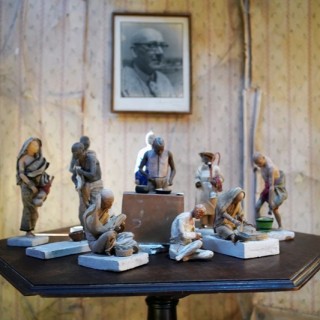 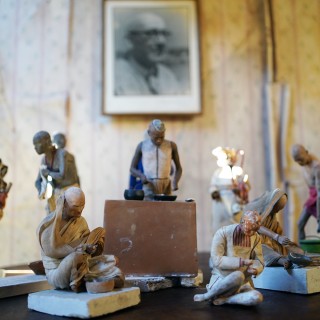 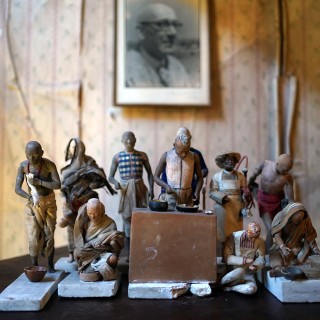 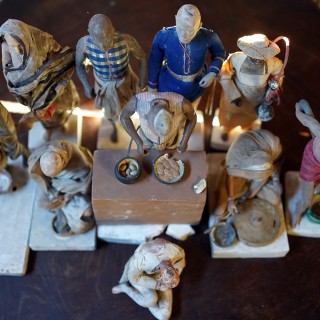 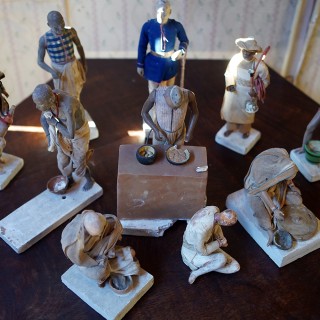 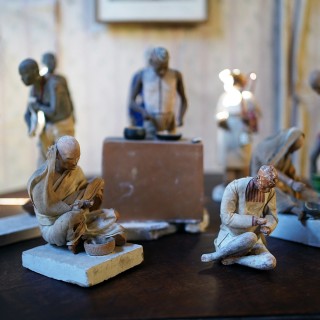 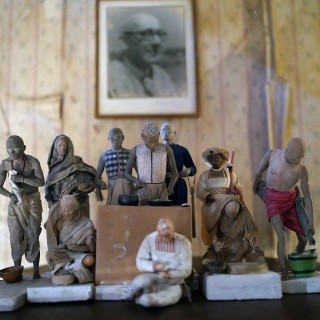 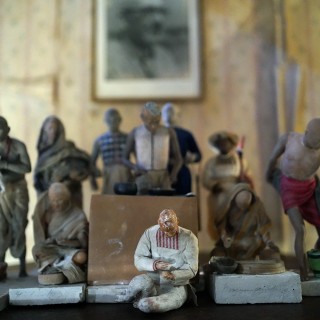 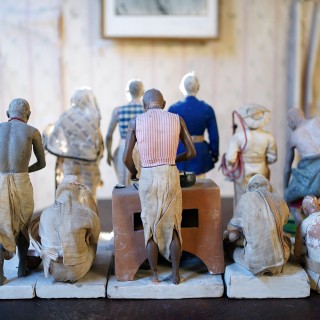 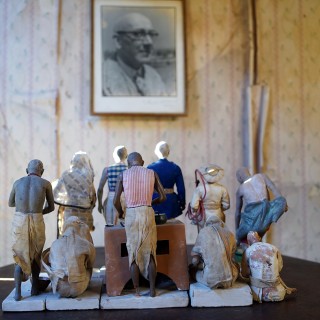 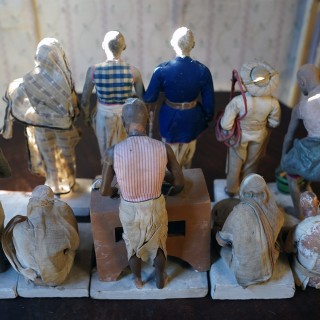 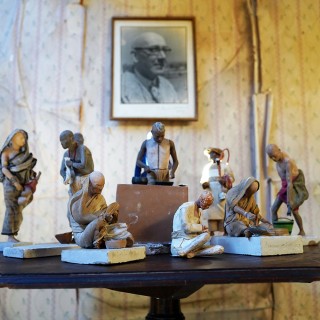 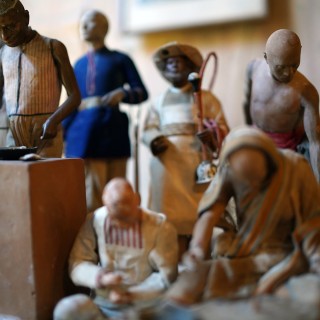 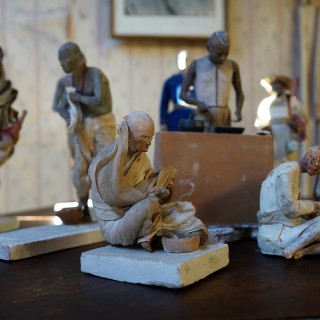 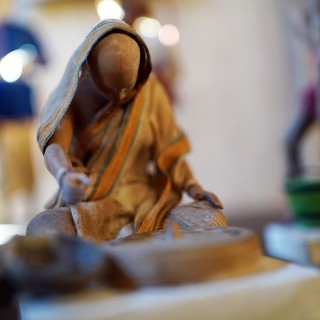 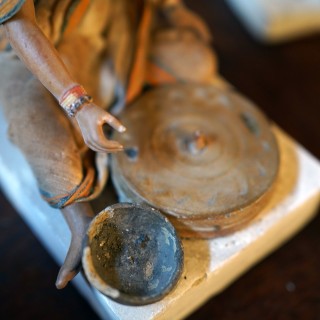 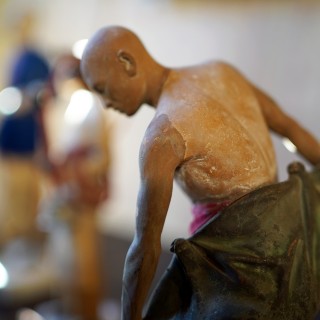 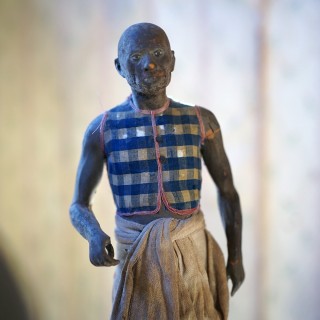 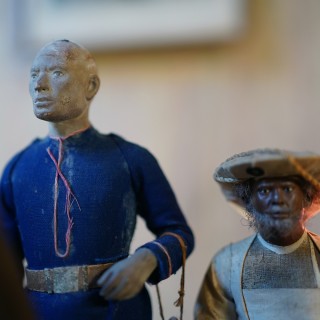 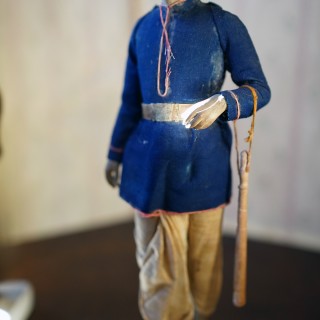 The beautifully modelled decade of unfired clay on metal armature figures having linen clothes being woven to fit the scale of the sculptures, each depicted doing daily chores or representing the everyday life of a Bengalese native, each realistically coloured and equipped and attributed to Jadunath Pal (1821-1920) and surviving from the third quarter of nineteenth century India.

These incredible clay figures are from Krishnanagar (near Calcutta), West Bengal. They were largely made and sold to Officers in the English Army.

Jadunath Pal grew up in a potter-caste neighbourhood of Krishnanagar, an important cultural centre north of Calcutta. In the 19th century his lineage of clay modellers gained international renown for astonishingly realistic figures depicting “natives” of various castes, sects and occupations, modelled in raw clay from life or pictures, realistically coloured, clothed and equipped. The Krishnanagar style of Western-inspired ocular realism was well established by the beginning of the 19th century. Later in the century, during the vogue for international exhibitions, colonial administrators used Krishnanagar figures as attractive and engaging displays to represent Britain’s Indian subjects. Pal’s uncle and mentor, Sriram Pal, received a medal at London’s pioneering Great Exhibition in 1851 for his “collection of clay figures”, appreciated for being so realistic “that we can desire no livelier illustration of life in India”. Symptomatic of shifting ideas about “art”, Sriram’s figures were registered in the “fine arts” division of the exhibition. But by the time of the jury’s award, the figures appear in a section for “ethnographical models”. This reclassification expresses both the determination to distinguish “fine art” from skilled artistry and ambivalence about the proper placement of Krishnanagar work.

Pal had received his first commission for life-size clay figures in 1883. The organisers of the Calcutta International Exhibition ordered a group of “ethnological models … from nature” (i.e. from life) of “typical [tribal] specimens”. Like the military figures for the Paris Exposition (reprised from a group presented at the 1886 Colonial and Indian Exhibition), Pal’s figures depicted individuals. But the exhibition organisers used them as “models” of ethnic and racial types, not portraits of particular subjects. The military figures hovered between the categories of typological model and portraiture. In the exhibition they were shown to illustrate regimental garb, but the exhibition publication also provided names and bio-data of each subject and referred to the figures as “portrait models”. In the Anglo-centric art discourse of the time, fine art sculpture needed to exhibit characteristics of Western neoclassical style–naturalistic form, monochrome finish in tones of marble or bronze, and a morally elevating subject. In addition the maker should have academic qualifications and be of respectable social standing.

Pal, as a low-status, lineage-trained sculptor whose subjects were usually ordinary people, hovered at the margin of Calcutta’s elite art world. While primarily known for his ethnographic models, the jury for the Second Calcutta Fine Arts Exhibition in 1874 recognised his skill as a portraitist with an award. Wealthy Bengalis commissioned Pal to create sculptures in neoclassical style to adorn their north Calcutta mansions. Pal also served intermittently as an instructor at the Calcutta art school, where he seems to have had a fraught relationship with the administration. His practice defied the elite academic art world’s widening division between “fine art” and “industrial art”. Neither the designation “artist” nor “artisan” could adequately encompass his practice.

A veritable hamlet of wonderful figures that instantly light up any surface as a group.

The figures vary in condition with some small losses and damages; please refer to the many images provided for a full visual reference. They are unfired specifically to preserve the soul of the individual.