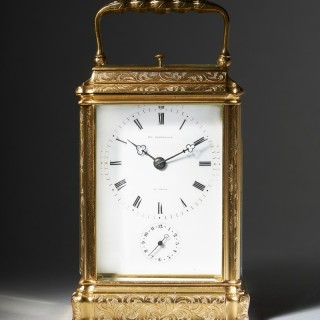 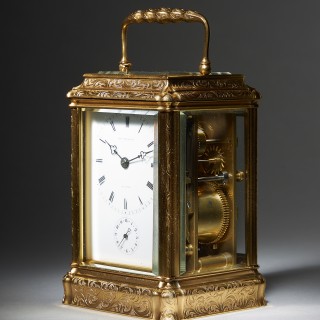 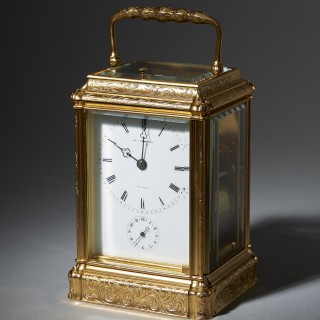 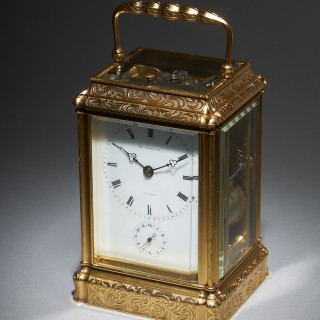 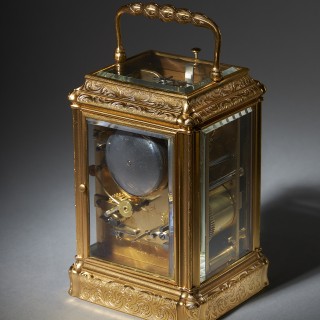 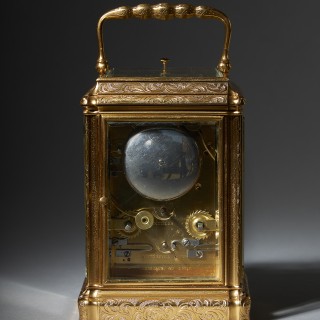 The superb engraved gilt gorge brass case has facetted glass panels to all sides, so that the movement is almost entirely visible. The top has large rectangular window which allows full view of the original silvered platform escapement. At the back there is a glazed door giving access to the winding and setting arbors, the functions of which are explained indications in French. The clock is surmounted by a typically shaped carrying handle.

The rectangular enamel dial has a Roman chapter ring with an outer minute track with five-minute markers. The time is indicated by a fine pair of blued-steel fleur-de-lys hands. Below is a smaller subsidiary Arabic ring which indicates the alarm time with a blued steel pointer. The maker has marked the dial in the following manner: PERREGAUX AU LOCLE.

The spring-driven eight-day movement of this charming clock is constructed between plates. It consists of going and striking trains, as well as alarm. The going train has an English lever escapement on a silvered platform with hairspring balance and regulation. It can be adjusted by a regulator pin which can be seen through the window in the top and is accessible through the back door. The striking indicates the hour fully and the half hours with a single stroke on a bell. In addition, it has a repeat button at the top, with which the last hour struck can be repeated at will. The backplate is signed by the maker in the following manner PERREGAUX AU LOCLE. The indications near the setting arbors are marked with the words AIGUILLES (‘hands’) and AIGLLE REVEIL (‘alarm hand’), as well as arrows to indicate the direction in which to turn.

Note on the maker
François Perregaux (1834-1877) was born from a family of watchmakers living in the small city of Le Locle in north western Switzerland. When he and his two brothers took over their father’s business following his death in 1847, their home region was already well known for watchmaking. However, the organization of the sector was quite different then: the production was scattered, non-industrialized, and thus did not provide merchants with enough financial power to explore the new markets that were essential for their survival. Against all odds, the Perregaux brothers would soon emerge as some of Switzerland’s most international watchmakers. After his early death the business was taken over by his son Henri (1828-1893). Later the company merged with that of his brother- in-law, the watchmaker, Constant Girard (1825-1903), to form the business Girard- Perregaux. The company still exists today producimg high quality wristwatches.