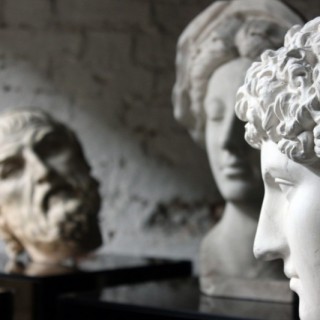 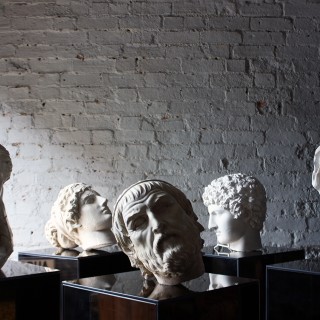 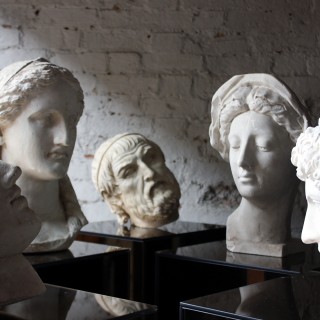 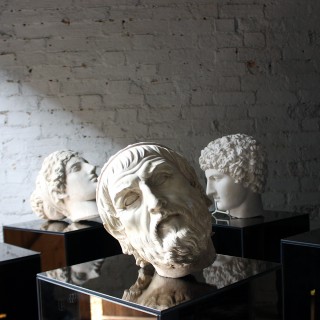 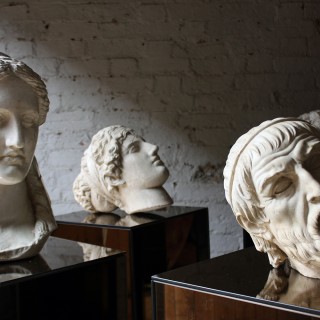 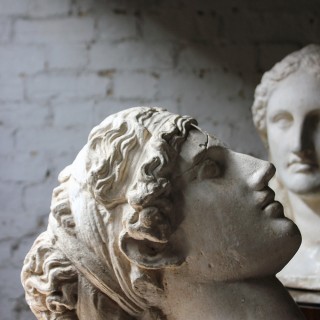 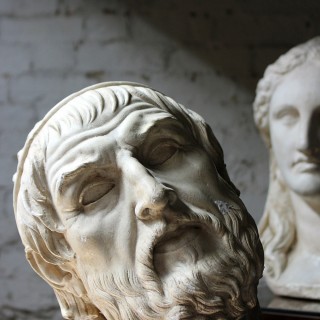 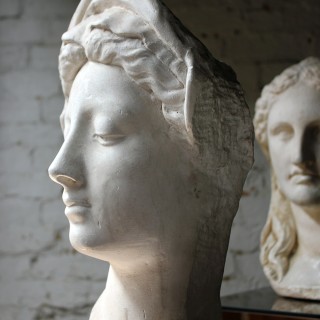 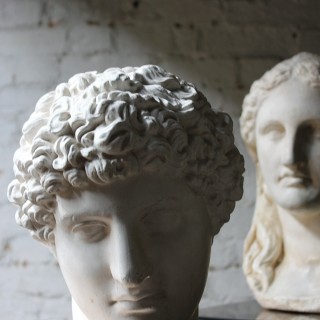 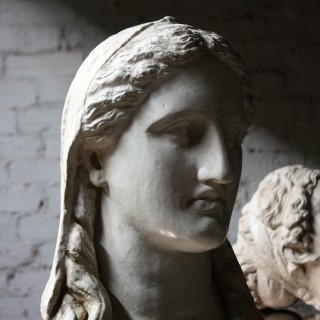 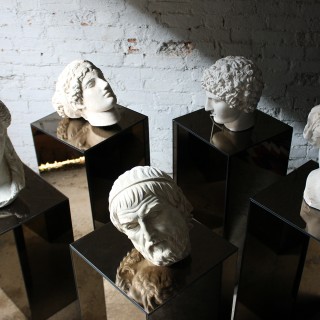 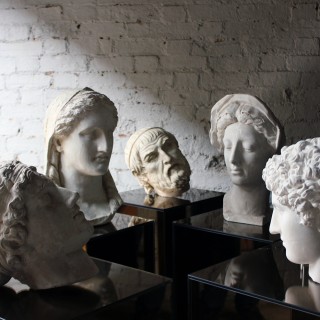 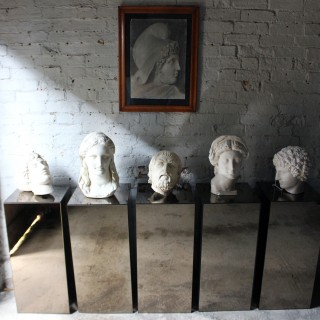 The highly decorative group of five well modeled studio portrait heads worked in composition plaster, after the antique, each depicting important figures from classical antiquity being two male and three female, and surviving from the second half of the twentieth century.

The portrait studies depict, in our opinion, the following figures:

The Demeter of Knidos is a life-size, seated ancient Greek statue that was discovered in the port of Knidos, south-west Asia Minor (present-day Turkey). Now part of the British Museum’s collection, it is an impressive example of Hellenistic sculpture from around 350 BC.

The Arundel Head is an Hellenistic bronze portrait of a dramatist or king from Asia Minor, now kept in the British Museum. Dating to the 2nd-1st centuries BC, the head once belonged to (and takes its name from) the famous English collector of classical antiquities, Thomas Howard, 21st Earl of Arundel.

Artemis was one of the most widely venerated of the Ancient Greek deities. Her Roman equivalent is Diana. Some scholars believe that the name, and indeed the goddess herself, was originally pre-Greek. Homer refers to her as Artemis Agrotera, Potnia Theron: “Artemis of the wildland, Mistress of Animals”. The Arcadians believed she was the daughter of Demeter.

The Capitoline ‘Antinous’ is a marble statue of a young nude male found at Hadrian’s Villa, Tivoli, during the time when Conte Giuseppe Fede was undertaking the earliest concerted excavations there. It was bought before 1733 by Alessandro Cardinal Albani. To contemporaries it seemed to be the real attraction of his collection. The statue was bought by Pope Clement XII in 1733 and went on to form the nucleus of the Capitoline Museums, Rome, where it remains

Beatrice “Bice” di Folco Portinari) was a Florentine woman who has been commonly identified as the principal inspiration for Dante Alighieri’s Vita Nuova, and is also commonly identified with the Beatrice who appears as one of his guides in the Divine Comedy (La Divina Commedia) in the last book, Paradiso, and in the last four cantos of Purgatorio.

The condition of the head studies is generally good with expected scuffs and chips commensurate with age and use to them overall. The head of Artemis has a chip to one side of the top and bottom edge. The painted surface to Demeter of Knidos has additional dirt and some peeling of the paint with a possible repair to her lips. There are chips to the hair and eyebrows to most of the heads. In terms of display, three of the five sit at jaunty angles. The three female studies are freestanding, (though Artemis has to sit in a certain fashion) whilst in terms of the males, the Capitoline Antinous needs supporting to one side (we have used a plate stand), and the Arundel Head is freestanding but again sits at a certain angle.