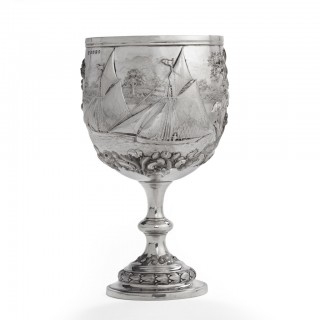 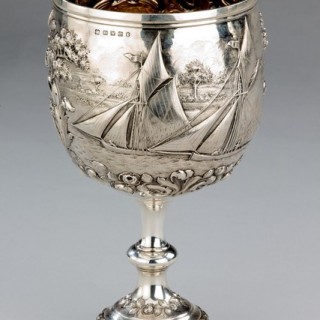 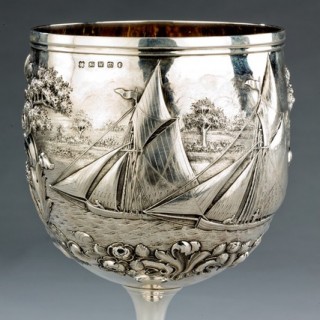 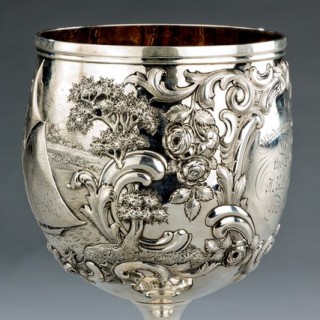 This silver-gilt presentation wine goblet has chased and repoussé decoration of two finely detailed large classic gaff-rigged yachts racing, the reverse inscribed Windermere Sailing Club. Won by the Meteor, J.R.Bridson, July 1864 , all within scrolls, acanthus leaves, trees and sprays of roses and set on a knopped stem with a victor’s laurel wreath round the foot, the interior gilt. English.

Joseph Ridgway Bridson (1831-1901) was well-known local figure Lancashire and the Lake District. Son of the mayor of Bolton, Thomas Ridgway Bridson, Joseph described himself as a master bleacher and finisher of calicoes. In 1881 he leased the whole island of Belle Isle in the centre of lake Windermere and while living there is credited with several innovations including the launch of a boat ‘driven by electricity…and intended to be used to keep up communication between his island residence and the mainland… the power which supplies the motor is derived from twenty secondary batteries or accumulators, charged primarily by the dynamo machine used at a Bolton bleach works’ and apparently Mr JR Bridson held the first sheep dog trials on Belle Isle as far back as 1877 and those who were invited to the gathering had to travel by boat. In addition, he was a founder member and president of the Bolton Photographic Society and of the Windermere Yacht Club which was founded in 1860.