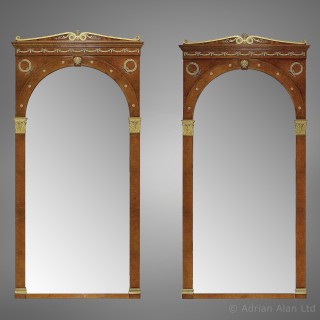 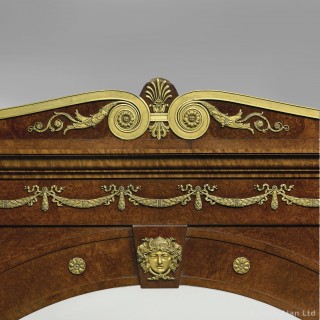 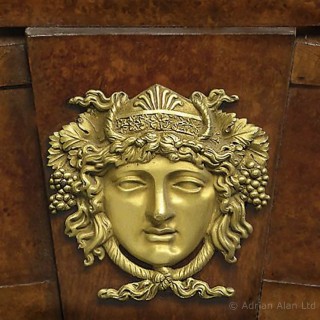 A Large and Impressive Pair of Empire Style Mirrors

A Large and Impressive Pair of Empire Style Gilt-Bronze and Burr, Amboyna Mirrors, By Maison Krieger.

Each mirror is over 328 cm high (129 inches) and has a scrolled cresting centred by an anthemion above an arched mirror plate centred by a gilt-bronze Apollo mask. The uprights are embellished with very finely cast gilt-bronze stiff-leaf capitals.

Maison Krieger exhibited at the 1849 Exposition des Produits de l’Industrie in Paris and at the Universal Exhibitions of 1851 in London and 1855, again in Paris. At the 1851 Great Exhibition in London Krieger were awarded a medal for an exhibition oak sideboard made for a client from the Ottoman Empire. Maison Krieger created numerous furniture styles, and the firm exhibited at all the major exhibitions of the nineteenth century up to and including, the 1900 Paris Exposition Universelle.

A Large and Impressive Pair of Empire Style Mirrors