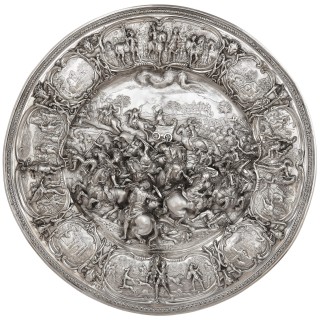 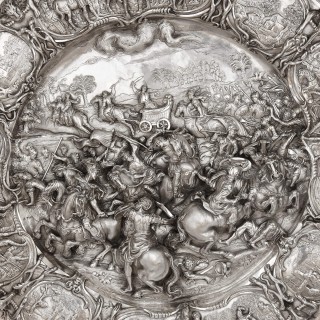 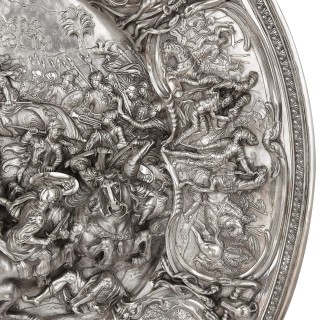 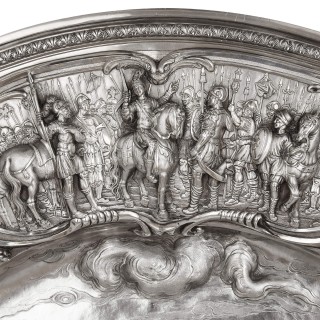 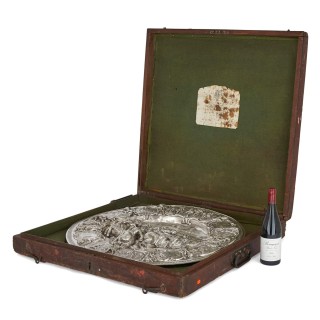 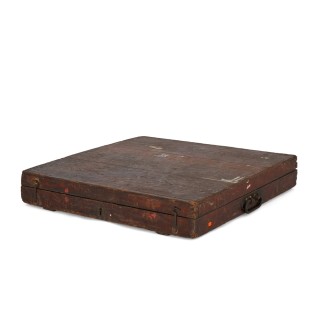 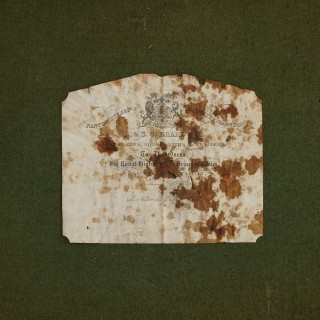 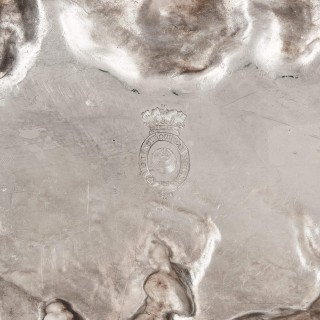 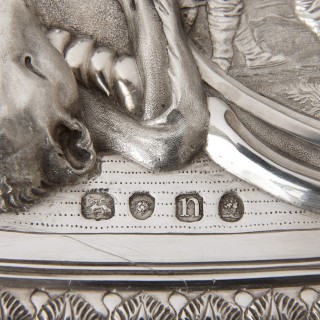 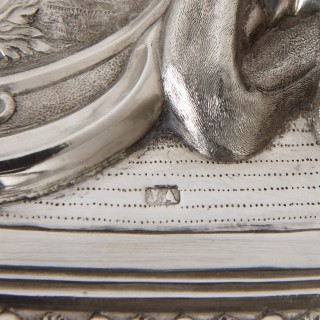 This magnificent silver sideboard dish was made by Joseph Angell II in 1828 for Rundell, Bridge & Rundell, and is elaborately and extensively decorated with superb sculptural relief. It depicts the Battle of Issus, fought in 333 B.C. between Alexander the Great of Macedon and Darius III of Persia, which was a decisive victory for the Greeks, in which they slaughtered their disorganized and crowded opposition. Famously depicted in a mosaic at Pompeii, scenes of Alexander’s victories were hugely popular in the sixteenth and seventeenth centuries, and this piece depicts that historic battle with the soldiers and cavalry shown in contemporary arms and armour. The soldier leading the charge in pursuit of the fleeing chariot in the deeper part of the central scene is likely Alexander himself.

The metalworking itself is quite simply exceptional. The embossing and chasing, including that of the cartouches around the border which depict various landscape and battle scenes, is superb, and the metal folds and ripples with such drama and depth – the horses towards the front are sculpted almost in the round – that the fury of the battle is wholly conveyed, and the skill and confidence of the craftsman resounds emphatically.

This particular piece is a direct replica of a work in the Royal Collection Trust which was purchased, possibly from Augsburg, Germany, by George IV in 1828. Joseph Angell subsequently made a number of copies, one of which was exhibited in the Great Exhibition of 1851, another was owned by Hugh Percy, 3rd Duke of Northumberland, and this one, possibly one of those, was presented to Queen Victoria and Prince Albert by R & S Garrard & Co., the crown jewellers after Rundell, Bridge & Rundell, as indicated by the label inside the case. The silver is fully hallmarked, signed and dated.