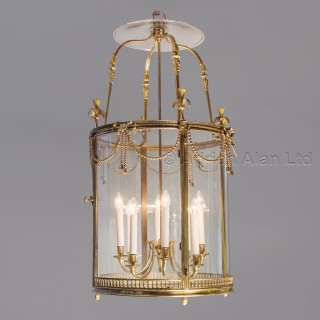 This large and impressive lantern is of cylindrical form with four ribbed uprights supporting a frame with beaded swags and ribbons and surmounted by ostrich-plume finials. A circular glass smoke shade is fitted beneath the suspension ring and the base cast with a pierced gallery.

The prototype for this fine lantern can be found in one supplied circa 1780 for the Château de Fontainebleau; illustrated P. Verlet, ‘Les Bronzes Dorés Francais du XVIIIe siècle’; p.96.

The lantern at Fontainebleau hangs in the Antichmabre du Col du cygnet, part of the Petits Appartements, used for feasts by Louis XVI. The room is named after the fountain it contains, representing a child playing with a swan amongst reeds, which was executed by the sculptor Philippe-Laurent Roland and the bronzier Pierre-Philippe Thomire in 1784.