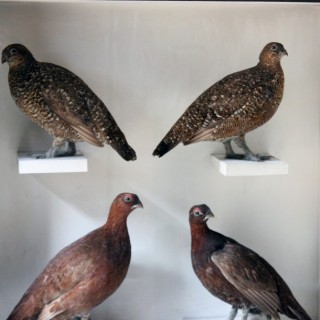 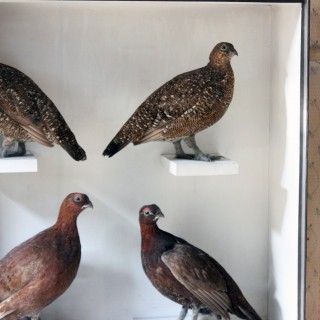 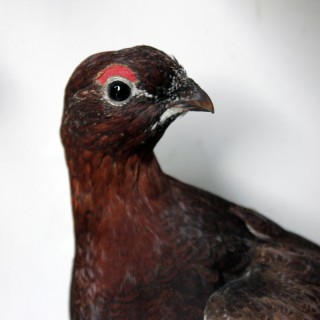 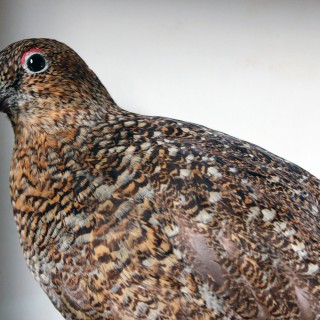 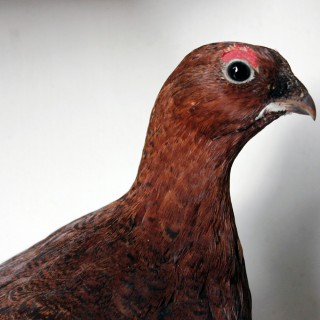 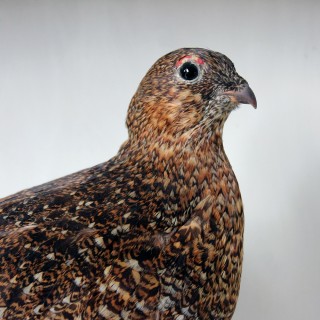 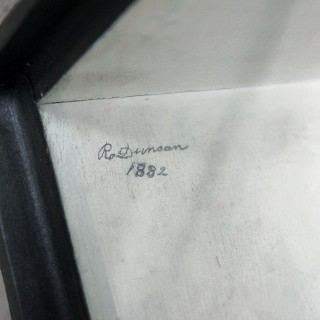 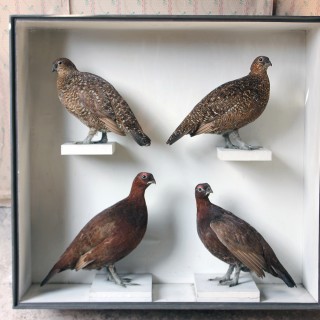 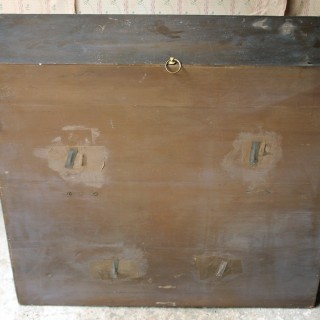 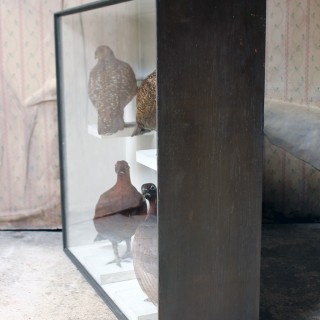 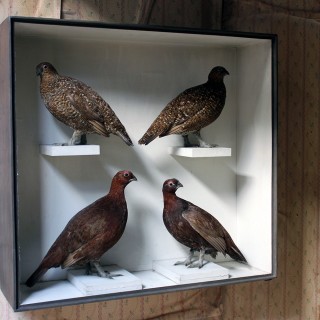 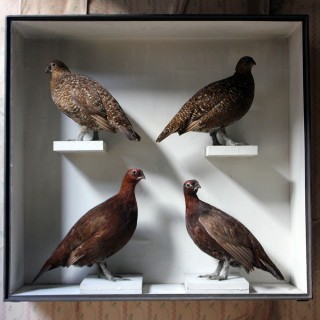 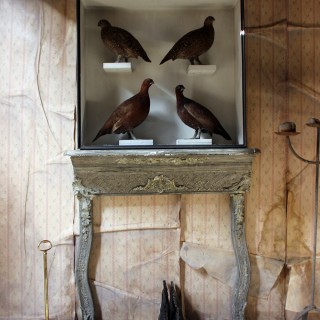 A Large Museum Cased Taxidermy Group of Four Scottish Red Grouse by R.Duncan of Newcastle Upon Tyne, Dated to 1882

The large and impressive case bearing two pairs of preserved red grouse (Lagopus lagopus), two female and two male, the specimens set upon typical Duncan wooden blocks and housed within a beautiful scientific sparse museum case, the males in opposing stances in full breeding finery having hot-red wattles above their eyes, the females in an un-opposing stance with their distinctive mottling, the pine sides in the original brown stained finish, with the whole being beautifully unassuming with off white paper backing, signed and dated ‘R.Duncan 1882’ to the upper left flank, and lacking in any form of simulated habitat; surviving from late Victorian England in superb overall condition.

The red grouse is a medium-sized game bird and is an icon of Scottish heather moors.. It has a plump body, a short tail and a lightly hook-tipped bill. It is reddish-brown, with its legs and feet covered in pale feathers. Birds breed in the UK in the uplands of the north and west and are resident all year round, travelling very little in their lives. The population is declining, perhaps linked to diseases and the loss of heather moorland. Indeed, no other bird in the world makes such major use of heather. A red grouse eats it, shelters, nests and rears young in it and typically doesn’t move far from its home heath in its lifetime.

Robert Duncan (1837-1909) of Pilgrim Street, Newcastle specialised in immaculate taxidermy, using a primitive method dating from 18th century practitioners in France. Despite this, his birds are beautifully precise, presented in a plain scientific museum box display, lacking in vegetation (akin to Joseph Cullingford’s) with no decoration to distract from the specimens. Unusually, he normally signed and dated his cases, like an artist as we see here, rather than attach a trade label, and dated cases have been seen from the early 1860s through to the Edwardian period. Few taxidermists had time to shoot their own specimens, but Duncan was know to have both collected and mounted his specimens. John Hancock refers to him in a letter in 1880 as: ‘A good taxidemist, and his father was a good bird stuffer too’.

A spotless museum quality piece with real presence and by probably the greatest ever practitioner in the field. Serious taxidermy.

The overall composition is of a very high quality and the birds are in super condition with expected light fade to the plumage but nothing out of the ordinary. The glazing and case are all original and the rest of the composition is very well preserved with expected light wear to the case. The pencil signature and date is clear. There is a large hanging hook for wall mounting but we would suggest batons being used as support in addition to this if intended to wall mount.

A Large Museum Cased Taxidermy Group of Four Scottish Red Grouse by R.Duncan of Newcastle Upon Tyne, Dated to 1882