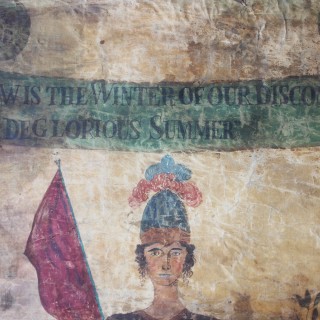 The wonderfully charming and provincially painted reform act banner of 1832, depicting Britannia upon an outcrop, below an emerald fielded ribbon inscribed with the Shakespearean verse; “Now is the winter of our discontent, made glorious summer” to a lower section showing a portrait of Lord Brougham, the naval ship of reform, and a British lion couchant, all painted in oils on linen and laid down on board, measuring over three feet high, and surviving from William IV period England.

This banner supports the cause of parliamentary reform and was painted during the early part of 1832. There was a satirical lithograph published in The Weekly Dispatch on the 1st January in the same year, which this example was almost certainly copied from. That original image shows Britannia carrying a banner, which bears the likenesses of Grey, Russell, Brougham and other Whigs. Behind her are two ships: the Reform which appears to be speeding forward under full sail, and the Anti-Reform which is slowly sinking below the waves.

The artist has simplified this image so that it is able to have an impact from a distance and therefore did not require the same level of detail as the print edition. The portraits of the Whig leaders have been removed from the banner entirely, whilst the image of the sinking ship Anti-Reform has been replaced by a portrait of Lord Brougham. The Reform is portrayed in profile rather than landscape and its name has been erased from the hull, meaning it serves more as generic symbol of British maritime power and mercantile prosperity than a specific metaphor for the Reform movement. The British lion has been shifted from the left to the right-hand flank of the image in order to avoid crowding out the ship. A scroll has also been included at the top of the banner, which reads: “Now is the Winter of our Discontent Made Glorious Summer”; the famous quotation form Shakespeare which would appear again in the history of popular political unrest in Britain.

In 1832, Parliament passed a law changing the British electoral system. It was known as the Great Reform Act. This was a response to many years of people criticising the electoral system as unfair. For example, there were constituencies with only a handful of voters that elected two MPs to Parliament. The Representation of the People Act 1832, known as the first Reform Act or Great Reform Act disenfranchised 56 boroughs in England and Wales and reduced another 31 to only one MP, created 67 new constituencies, broadened the franchise’s property qualification in the counties, to include small landowners, tenant farmers, and shopkeepers and also created a uniform franchise in the boroughs, giving the vote to all householders who paid a yearly rental of £10 or more and some lodgers.

Workers, particularly in industrial trades, were heavily involved in the movement for political reform, which would result in the first Reform Act of 1832. Mass demonstrations were held in most manufacturing towns in May 1832 to press for the passage of the Bill which was seen as being impeded by the House of Lords. Demonstrations included the display of trade union banners, some of which had been made especially for the event and this example would have been part of that movement. Tradesman believed that the act had given them the vote, hence the creation of these banners. The celebration was, however, somewhat premature. In reality reform had only extended the franchise to the middle classes.

Has the time of unhappiness indeed past? We aren’t so sure, but what is certain is that this work proves to be an important social and artistic marker and a rare and decorative one at that.

The work is presented unrestored, and it is fairly fragile, with areas of flaked loss, staining and wear commensurate with age; please view the photographs for a visual reference. The piece does have some bend to it; it has fairly recently been mounted to modern mdf back board and baton for wall hanging. It may benefit from being professionally framed and glazed but does hang for purpose as is. The fact it has survived at all is quite something as it was almost an ephemeral work at the time.