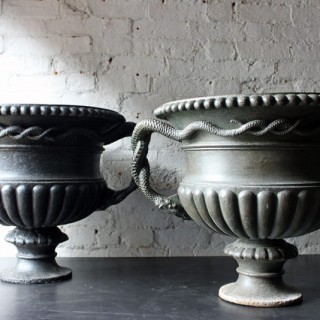 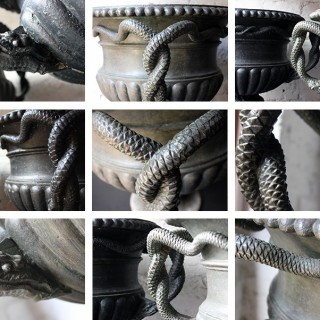 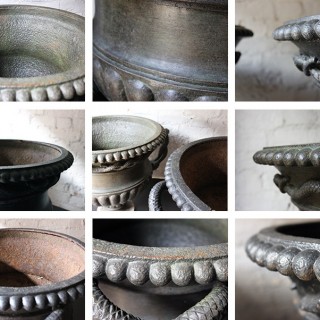 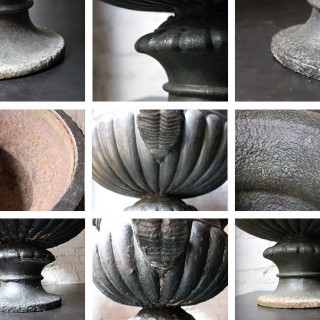 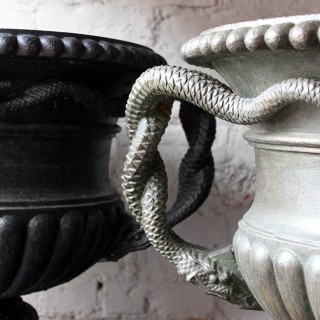 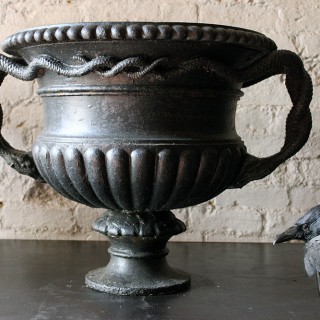 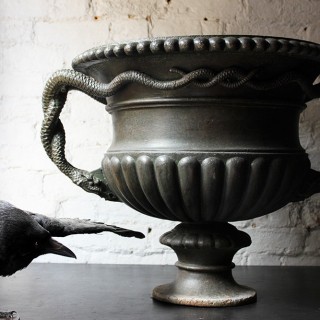 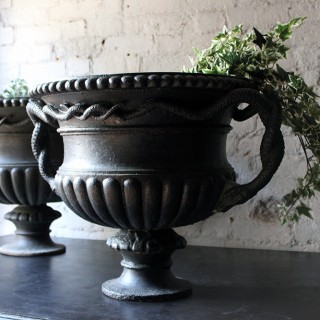 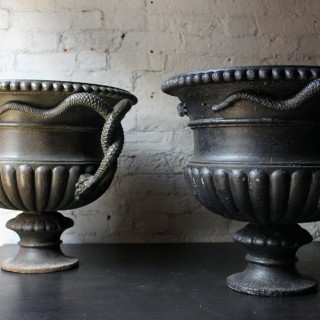 The rare, large and finely cast pair of French estate cast iron urns of deep semi lobed campana form with beaded rim and double-entwined snake handles, raised on turned feet with lobed collar, one finished in sea green and one in black, possibly having been made by the Val D’Osne Foundry and surviving from the third quarter of the nineteenth century.

These urns are a refinement of, and, are loosely based on, the Warwick vase, although not bearing the same decoration to the main body, the Warwick vase has intertwined vine handles rather than that of serpents. The Warwick Vase is an ancient Roman marble vase with Bacchic ornament that was discovered at Hadrian’s Villa, Tivoli about 1771 by Gavin Hamilton, a Scottish painter-antiquarian and art dealer in Rome, and is now in the Burrell Collection near Glasgow in Scotland. Urns or vases with snake or serpent formed handles appear in early Italian majolica.

The Val d’Osne company was an art foundry created in 1835 by Jean Pierre Victor André, inventor of ornamental cast iron. His nephew, Hippolyte André (1826-1891) took on the running of the business once he died. The foundry set up its workshops in Val d’Osne in the Haute Marne region and regularly received awards during different exhibitions on French manufactured goods (1834: bronze medal, 1839 silver medal, 1844 and 1845: gold medals). The Val d’Osne company also took part in many Universal Exhibitions, including the World’s Fair of 1851 in London, the World’s Fair of 1855 in Paris, Santiago in 1875, Melbourne in 1879, Paris in 1878 (first prize and two gold medals). The foundry collaborated with many important artists such as Carrier-Belleuse, Mathurin Moreau and Pradier. It was also renowned for its monumental fountains, animal statues, and large statues made out of cast iron, according to antique or classic models. The Val d’Osne foundry was still in operation during the 1970s.

We have found only one other pair for sale elsewhere online and they are listed for $18,000 (approximately £11,600). Those examples have been refinished in matt black and set onto modern pedestals so we feel this pair offer more originality and value for money even with the damage mentioned to one of the urns.

The condition of the urns is, overall good to very good. For the first urn the patina to the dark green finish is pleasing and there are no deficiencies to note with one old internal repair to where the basin joins to the foot. The pedestal base has some more wear to it than the rest of the body. The second urn is finished in black and has had two old repairs, one to the rim and one to one area of the serpent decoration but both repairs aren’t noticeable unless under a glass. Thus, they remain a very attractive pair and would be described as good to very good considering age. They stand alone as sculpture but also prove elegant with topiary or flowers.