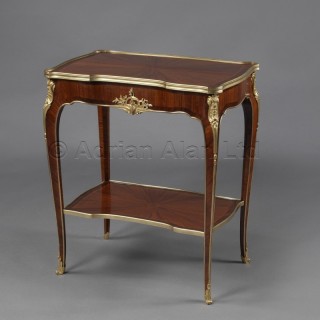 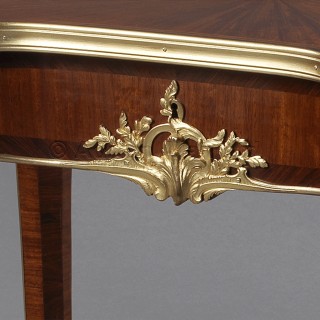 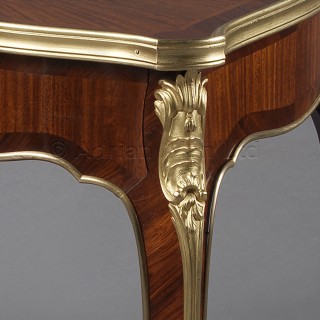 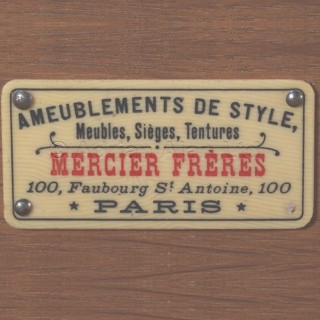 This fine petite salon table has a shaped gilt-bronze banded top inlaid with radiating parquetry above a frieze drawer centred by a foliate gilt-bronze mount. The table is raised on slender cabriole legs headed by foliate clasps and united by a shaped undertier. The legs terminating in scrolled foliate clasps.

Claude Mercier was born near Dijon in 1803 and established in Paris in 1828, with premises at 15 rue Beautrellis. The firm moved to new premises in 1867 at 100 rue du Faubourg-Saint-Antoine changing its name to become Mercier Frères.

Mercier Frères made furniture for the Spanish court in 1855 and participated in many of the major 19th century exhibition, including the Exposition des produits de l’industrie française in 1844 and 1849 and received medals at London in 1852 and in Paris in 1855.

François Linke is known to have produced items of furniture for Mercier Frères.

In the Twentieth Century, the brothers incorporated the contemporary Art Deco style alongside their traditional furniture, exhibiting an office in the 1924 Salon des Artistes Décorateurs. They also exhibited in the two 1929 Salons and became particularly well known for their traditional use of wood. In the 1925 exhibition at the Esplanade des Invalides, Stand 48, they exhibited with firms such as Sormani. In the 1920’s a new gallery was opened at the Palais de Marbre at 77 Champs-Elysées.