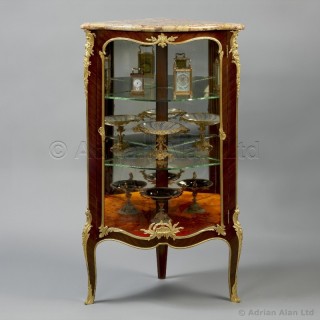 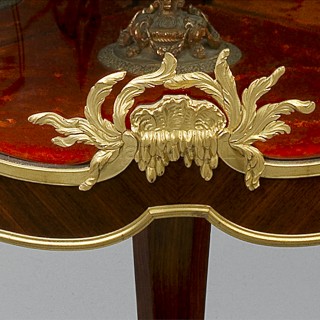 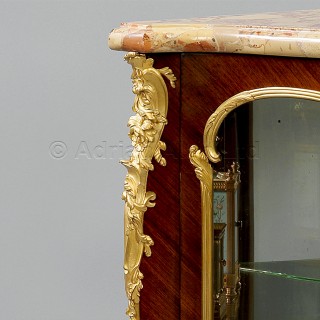 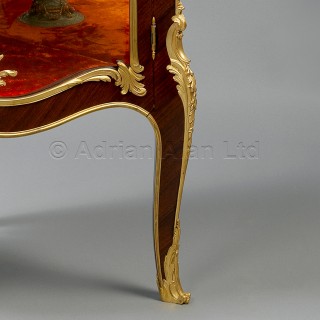 The gilt-bronze mounts stamped to the reverse ‘FL’.
The back of the lock stamped ‘C.T. LINKE’.

This well proportioned corner vitrine has a shaped Brèche d’ Alep marble top above uprights headed by finely cast and chiselled gilt-bronze foliate mounts, framing a single shaped glazed door with a gilt-bronze frame. The door opens to a mirrored interior with two shelves and the vitrine is raised on gilt-bronze mounted cabriole legs.

A notable feature of Linke’s work, perhaps even more of a guarantee than a signature, is his use of a concave scallop-shell or coquille, which features at the base of the door. The distinctive shell, as designed by Linke’s sculptor Léon Messagé, is held by delicate tendrils of acanthus quietly moving on to the glass surface, implying the shape of a crab.

This rare and charming display cabinet is so very clearly from Linke’s workshops with his stamp on the mounts and the lock by his younger brother Clément that no further evidence is necessary. However the fact that there is no original photograph shows that despite being the most extensive archive of any world class cabinetmaker of any era, the Linke archive is not complete and that there will certainly be more discoveries to be made.