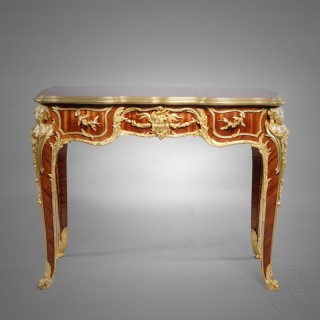 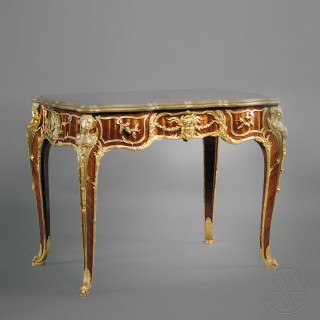 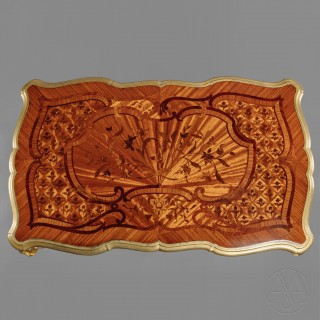 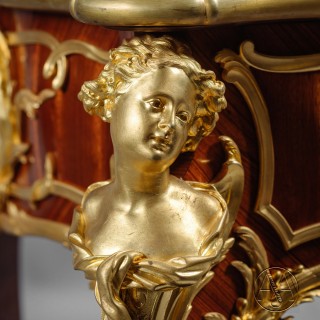 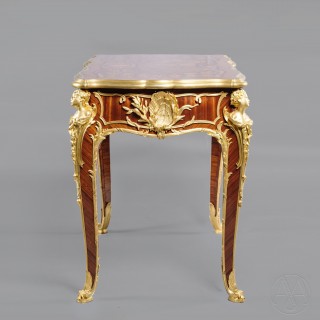 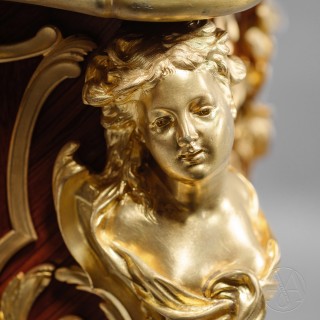 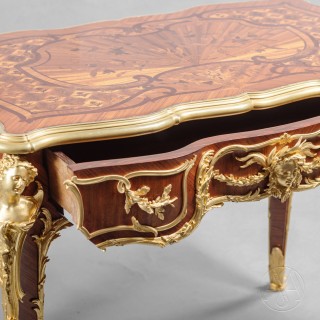 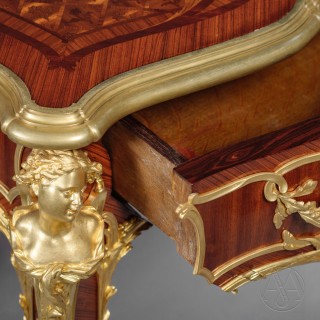 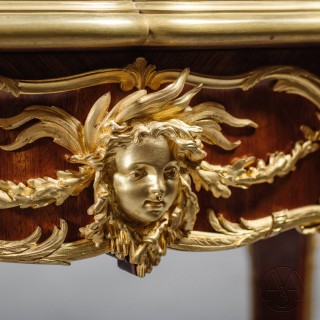 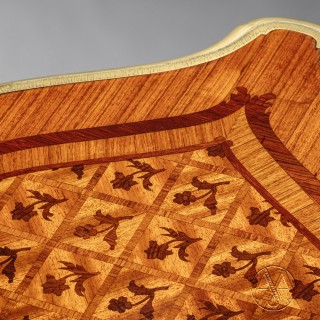 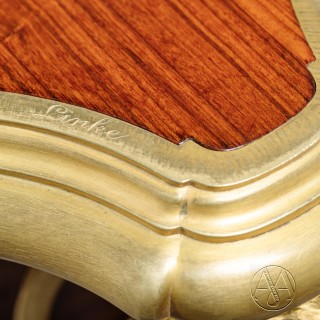 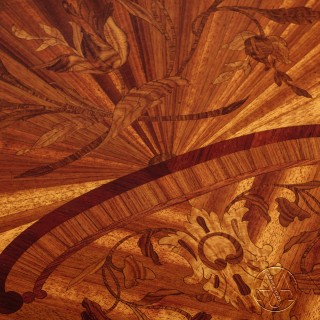 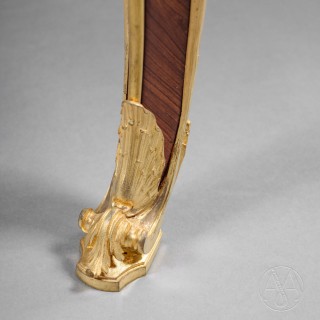 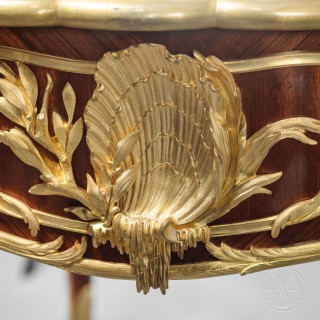 Linke Index No. 930.
Signed ‘Linke’ to the upper bronze moulding.
Stamped ‘FL’ to the reverse of the bronze mounts.
Stamped to the carcass ‘Made in France’.

Of exhibition quality this magnificent table has a fine marquetry inlaid top and sumptuous gilt-bronze mounts, designed and sculpted by Léon Messagé. The shaped gilt-bronze mounted serpentine top is finely inlaid with scrolling bois de bout floral marquetry, above an undulating frieze set to the front with a long drawer and centred by a female mask, the sides are mounted with exuberant scallop-shell mounts and the angles with lively and emotive female espagnolettes emblematic of Modestie and Coquetterie; the table is raised on cabriole legs terminating in shell-capped scrolled sabots.

The exceptional sculptural mounts are characteristic of the very finest 19th Century furniture created through François Linke and Léon Messagé’s collaboration. Messagé’s enhanced Louis XV Rococo style embraces the asymmetrical lines of designers such as J.A. Meissonnier, to create lively and emotive figures linked by sinuous encadrement, but cleverly modernised to reflect the surge of popularity of the Art Nouveau.

The female busts, referred to by Linke as Coquetterie et Modestie, although reminiscent of the paintings of François Boucher and Flaconet have moved on in their design from the classical espagnolette, introduced by Charles Cressent in the 18th century, to become something new and vital.

Designed for the celebrated ‘Commode coquille: Coquetterie et Modestie’ (index 559), presented at his award-winning stand at the 1900 Exposition Universelle in Paris, (C. Payne, François Linke: The Belle Epoque of French Furniture, Woodbridge, 2003; p.142-144, pl. 151), Linke was obliged to purchase their design at a tremendous cost from Messagé. First castings began in 1897 and they proved fruitful for Linke, becoming a favourite mount, repurposed by Linke for use on a number of important designs.

The larger version of the current table was intended to be displayed en suite with the commode but was not ready in time for the exhibition. It was first exhibited at the Salon des Industries du Mobilier in 1902, and again in Liège in 1905 (C. Payne, François Linke: The Belle Epoque of French Furniture, Woodbridge, 2003; p. 170-173).

The formation of Linke’s distinctive style was made possible by his collaboration with the sculptor Léon Messagé. Together Linke and Messagé designed furniture for Linke’s 1900 exhibition stand, with exuberant allegorical figures cast in high relief, that exemplified Linke’s ability to seamlessly merge the different mediums of wood carving, bronze and marquetry into a dynamic unified whole.

Léon Messagé (1842-1901) had a brilliant, but short lived career. He is best known for his incredible sculptural collaboration with François Linke for the 1900 Paris Exposition Universelle. A gifted sculptor, Messagé was also responsible for much of the design and creative work for Roux et Brunet and Joseph-Emmanuel Zwiener.

‘Cahier de dessins & croquis, style Louis XV: bronzes, orfèvrerie, décoration, meubles’ was first published by the sculptor himself, from his Paris address of 40 rue Sedaine. There were five sections with an elaborate title page surmounted by the sculptor’s cipher or talisman of a wing, a pun on his own name as the messenger to the Gods, a motif he used many times on the handles of furniture designed for Linke.

As a sculptor Messagé was trained to produce a wax maquette or model prior to working on a piece. It is especially interesting that his maquettes were of the piece of furniture in its entirety, a rare and exacting task occasionally seen for eighteenth century French Royal commissions. For Messagé it was not just a matter of producing decorative mounts; the piece was conceived as sculpture, bronze, timber and marquetry as one.