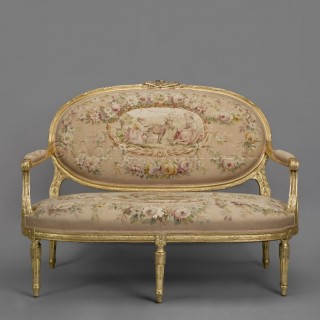 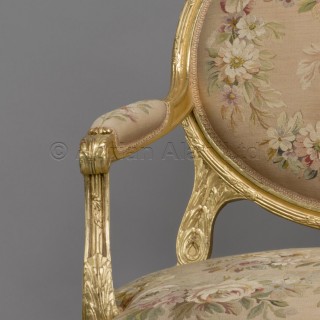 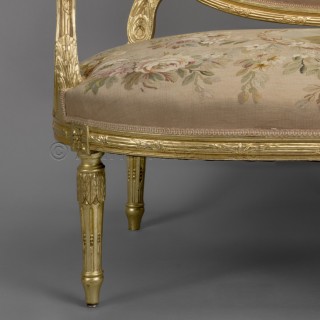 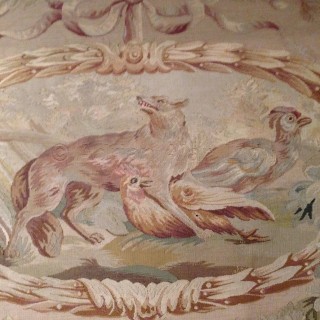 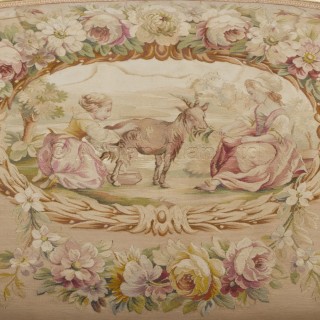 The small town of Aubusson, on the River Creuse in France, had a long history of producing elaborate and costly tapestries. They were known for their elegance and delicate colouring and often depicted romantic pastoral scenes derived from artists such as Boucher; historic scenes, inspired by classical mythology; or more formalized architectural vistas.

Aubusson was particularly noted for its finely balanced compositions of garlands and bouquets which became famous and sought after throughout Europe.

Aesop was by tradition a labourer who was a contemporary of Croesus and Peisistratus in the mid-sixth century BC in Ancient Greece. The various collections that go under the rubric “Aesop’s Fables” are still taught as moral lessons and for centuries have been influential subject matter for artistic endeavour.

The Shepherd Boy and the Wolf:

In a village was a young boy who had a job watching the village’s sheep. Two times he called out, “Wolf! Wolf!” Each time the villagers came running to help the boy. And both times the boy just laughed at the villagers and called them names. But then the wolf really did come and start eating the sheep. The boy called, “Wolf! Wolf!” but the villagers just ignored his calls. They thought he was just trying to trick them again. The wolf took his time and had a huge meal of the entire flock of sheep.

The Wolf in Sheep’s Clothing:

Once upon a time there was a wolf who decided to disguise himself so he could get some food without working too hard. He took a sheep’s skin and hung it over his body. Then he went into the sheep pasture and pretended to graze with the sheep. He fooled everyone. Even the shepherd didn’t realize she had a wolf grazing with her sheep. Soon the shepherd moved the sheep into the barn and the wolf went with them. The barn door was closed and locked and the wolf was just about ready to have a nice meal when the shepherd came back. She decided she wanted some food for her meal. She grabbed the wolf who was still disguised as a sheep and killed him for her meal.

The Wolf and the Crane:

One day a wolf had a bone stuck in his throat. He called to a crane and hired him for a large sum of money to put her head in his mouth and remove the bone. The crane did as she was hired to do and got the bone out and then asked to be paid. The wolf just grinned and said, “Ha! You’ve already been paid. I let you take your head safely out of my mouth when I could have crushed you with my powerful jaws”.

The Wolf and a Mountain Goat:

One day a wolf looked up and saw a mountain goat eating on a ledge high up on the side of a steep mountain. The wolf called out to the goat, “You should come down here to eat, you might fall if you stay up there. And the grass is very tender down here.” But the mountain goat was too smart for the wolf and called back, “I don’t think you are worried about my dinner. You are just looking for your own food!”

The Wolf and the Lamb:

One day a wolf happened to run into a lamb. The wolf decided that he would find some good reason to eat the lamb. The wolf said to the lamb, “Sir, last year you insulted me!” but the lamb replied, “I wasn’t yet born last year.” So the wolf said, “You have eaten in my pasture” but the lamb said, “I don’t eat grass yet”. Then the wolf tried again, “You drank from my well”. The lamb replied, “The only thing I drink is milk”. At that point the wolf ate the lamb saying, “Well! You certainly like to argue!”