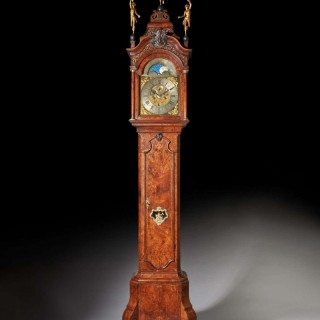 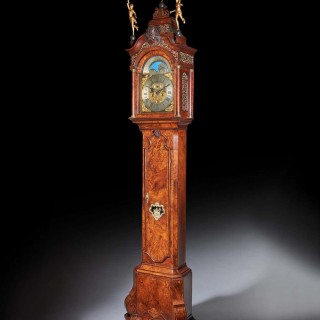 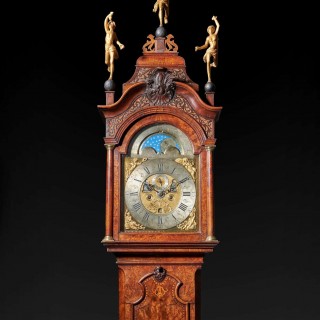 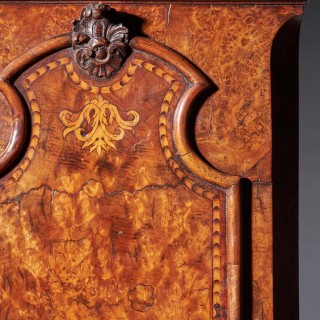 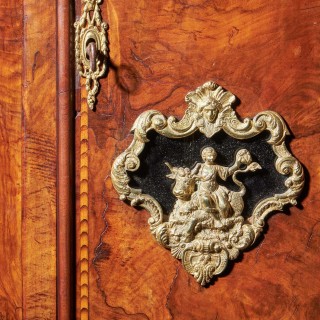 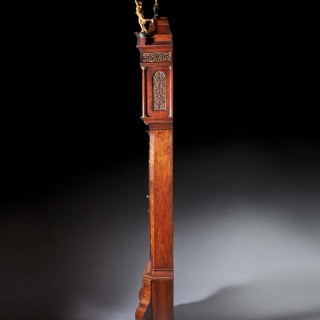 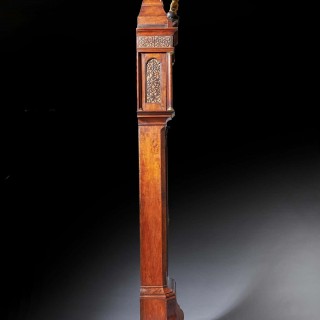 An impressive Dutch longcase clock with a burr walnut veneered oak case, signed on the chapter ring Pieter Brandt Amsterdam, c. 1745-50. The hood of this clock has a broken arch top pediment with very fine elaborate fretwork functioning as sound frets, as well as a prominent asymmetrically carved ornament. It is surmounted by three very fine gilt wooden statuettes depicting a Chronos figure flanked by two Mars figures. The shaped door in the trunk is embellished by rosewood inlays and has a lenticle with a classic brass surround in the shape of the goddess Europa on her bull, through which the movement of the pendulum can be seen. The impressive base is fortified by buttress-like corners and rests on ball feet.

The superb arched brass dial has a silvered Roman and Arabic chapter ring, a subsidiary seconds ring above the middle and a date aperture above the VI. Left and right of the middle are a month aperture showing the month, a symbolic representation of the month and the number of days in the month, as well as a day aperture showing the day of the week and a symbolic representation of the day. The phases of the moon are shown in the arch, as well as the time of high water in Amsterdam, which was important to the tradesmen in the 18th century. The time is indicated by a pair of blued steel hands on the silvered chapter ring, which is surrounded by gilt cast brass spandrels in the corners depicting the four seasons.

The weight-driven eight-day movement consists of going and striking trains, as well as an alarm. The going train has anchor escapement and a seconds pendulum. The quarter striking train indicates the hours and half hours fully on two bells differing in pitch (Dutch striking) and the quarters with one stroke. It is regulated by a rack mechanism and can be repeated at will by pulling a cord behind the door. The weight-driven alarm is set by a silvered disc behind the hands, the tail of the hour hand indicating the alarm time.

The maker
Pieter Brandt was from a family of clockmakers and was active as a clockmaker from c.1740-1785. Not much is known about him, but it is abundantly clear from his work that he was an excellent maker.