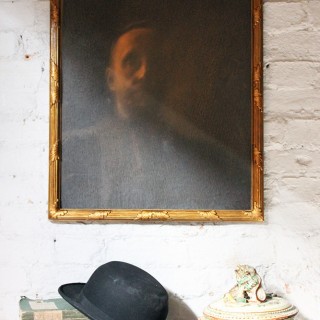 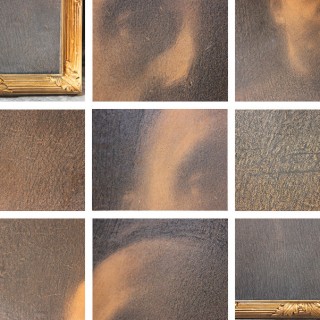 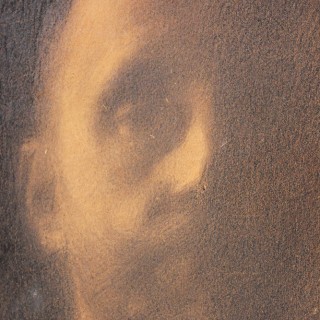 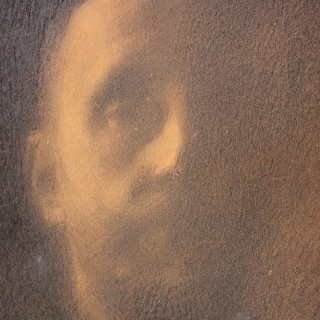 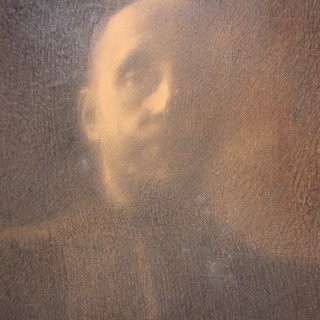 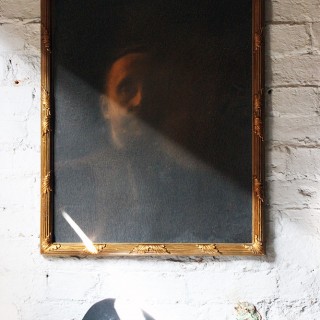 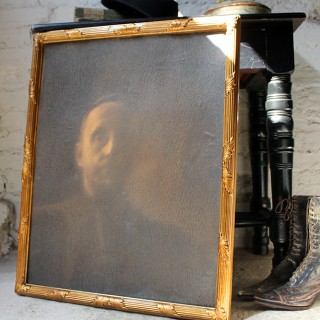 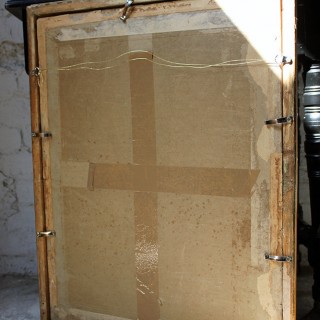 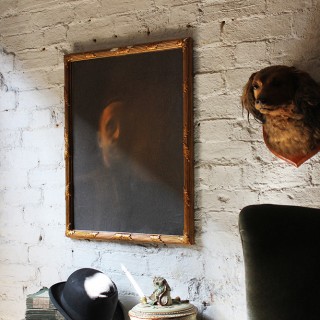 The wonderfully ethereal and superbly well executed Belgian symbolist school charcoal and pastel bust length portrait of a moustachioed man presented in a ripple moulded frame with leaf centres and corners, and indistinctly signed top right survives from the last quarter of the nineteenth century.

The sheet is laid down overall onto a backboard and appears in good overall original condition.
The frame is quite possibly original to the picture and has some losses to the top mouldings. The picture has one or two air bubbles, which must have occurred when it was laid to board.

This wonderfully executed treatment uses light in an incredibly subtle way. When looking closely at the picture the almost pixelated strokes don’t make sense yet when viewing the work as a whole the collective becomes a triumphant ethereal study of a moustachioed middle aged man, his hair thinning, his stare fixed and yet somehow showing compassion, a likeability, and one that we can almost touch.

Symbolism, a late 19th-century movement of Post-Impressionist painting, flourished throughout Europe between 1886 and 1900 in almost every area of the arts. Initially emerging in literature, including poetry, philosophy and theatre, it then spread to music and the visual arts. Symbolist painting had strong connections with the Pre-Raphaelites and Romanticism, as well as the Aestheticism movement. Like all these movements, Symbolism was in large part a reaction against naturalism and realism. Where realists and naturalists sought to capture optical reality in all its objective grittiness, and thus focused on the ordinary rather than the ideal, Symbolists sought a deeper reality from within their imagination, their dreams, and their unconscious. Famous symbolist painters included Gustave Moreau (1826-98), Arnold Bocklin (1827-1901), Ferdinand Hodler (1853-1918), Max Klinger (1857-1920), Paul Gauguin (1848-1903), James Ensor (1860-1949), Edvard Munch (1863-1944), Odilon Redon (1840-1916), and Puvis de Chavannes. Although comparatively shortlived, the movement had a big impact on 20th century European fine art, particularly on Art Nouveau, and Les Nabis, and the Expressionism and Surrealism movements. It exerted a particularly strong influence on German art of the 19th century. It also influenced artists like Whistler, Giorgio de Chirico, Joan Miro, Paul Klee, Frida Kahlo and Marc Chagall.