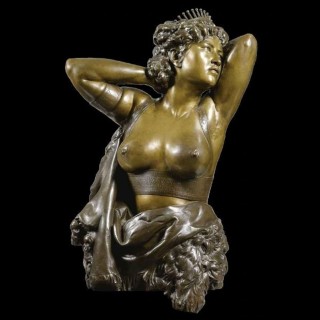 A Multi-Patinated Bronze Figure of an Egyptian Dancer By Cesare Fantachiotti, Cast by Fonderia Galli

A Multi-patinated Bronze Figure of an Egyptian Dancer by Cesare Fantachiotti (1844 – 1922). Cast by Fonderia Galli.

The figure is finely modelled in bronze with a rich multi-patinated patina heightened with gilding. The naturalistic pose and fine detail capture a wonderful sense of vitality and immediacy.

Cesare Fantachiotti was the son of a sculptor, Odoardo Fantachiotti, and studied at the Accademia in Florence. His works range from the slightly classicising marble nude ‘Eve’ in the Galleria Civica d’Arte Moderna e Contemporanea to lively genre subjects such as the present model. Using the talents of the founders of the Fonderia Galli, Fantachiotti brings his Oriental dancer vividly to life with a luxurious double patination.

Cesare Fantacchiotii studied under his father the sculptor Odoardo Fantacchiotti before attending the Academy of Fine Arts in Florence. Moving away from his fathers restrained Neo-Classical representations, Cesare developed an individual style characterised by the naturalistic depiction of romantic subjects.

He became a resident Professor of Sculpture at the Florence Academy for Fine arts in 1887.

The Galli Foundry cast several bronzes during the late 19th and early 20th century including the statue of George Washington by Richard Henry Park (1832-1902) (City of Milwaukee, 1885).

A Multi-Patinated Bronze Figure of an Egyptian Dancer By Cesare Fantachiotti, Cast by Fonderia Galli