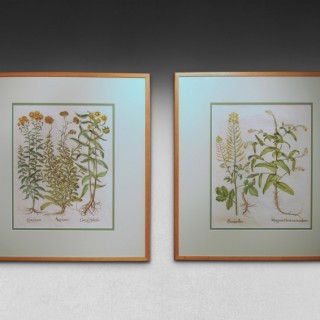 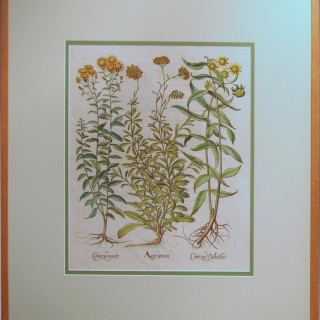 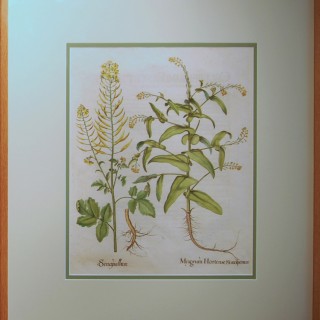 Copper engravings with fine hand colour. The plates are from ‘Hortus Eystettensis’, one of the earliest and most famous works in the field. It is a pictorial record of the flowers grown in the greatest German garden of its time, that of Prince Bishop of Eichstatt, Johann Conrad von Gemmingen. The garden was begun by Joachim Camerarius in 1596 and after his death in 1598, completed by Basil Besler, a pharmacist from Nuremberg. A visitor, Philipp Hainhofer, in 1611 marvelled at the eight gardens, each containing ‘flowers from a different country; they varied in the beds and flowers.’ It is one of the earliest records of flowers from a specific documented garden. Besler was asked to complete the work by Gemmingen in 1606; the huge nature of the task was clear to Besler and he enlisted the help of his younger brother Hieronymus and Ludwig Jungermann, a nephew of Camerarius. Printing the Hortus may have begun as early as 1607. Drawings were made in situ and from specimens sent by the Bishop to Nuremberg; the Bishop reported to Hainhofer that he had boxes of fresh flowers sent every week to Besler for sketching. A team of at least 10 engravers were employed to translate the drawings into copperplates. The gardens, along with most of the town of Eichstatt, were destroyed by the invading Swedish Troops under Herzog Bernhard von Weimar in 1633-4, although they were partially restored by later bishops. Many of the original drawings survive in the University Library, Erlangen. Copper engraving, with fine hand colour. Dimensions: 540 by 447mm. Published Nuremberg, 1713.
Circa: 1713
Dimensions: 21.25″ by 17.65″, 540mm by 447mm.

It is some time since we were able to offer some of these exquisite and early engravings. Collectors worldwide have come to acknowledge just how fundamentally ground breaking Besler’s work was bearing in mind that he was originally commissioned to produce what was in effect an illustrated catalogue in 1606.