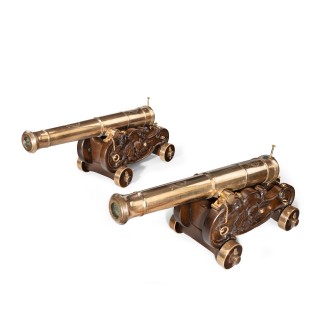 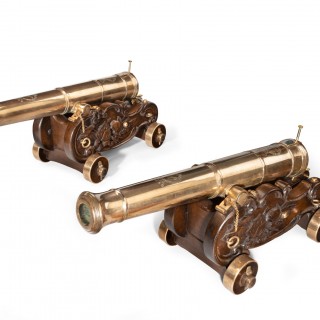 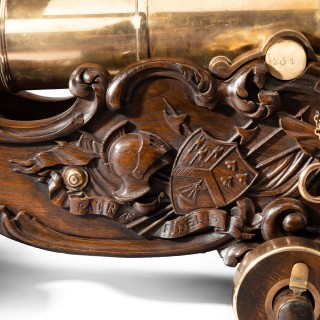 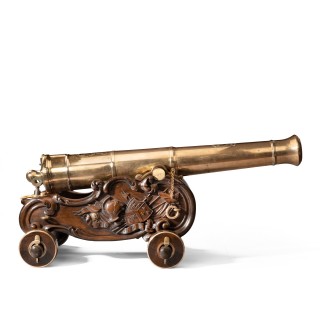 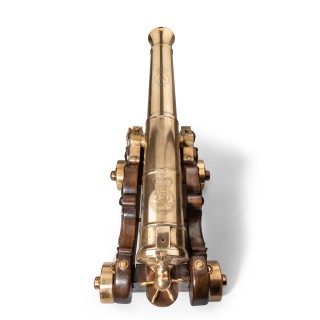 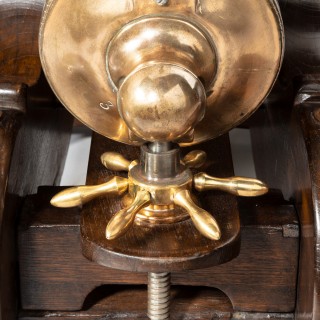 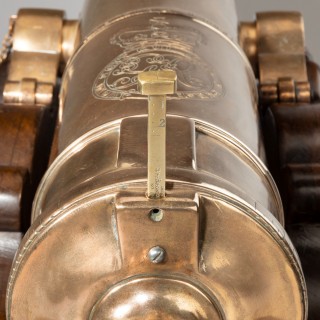 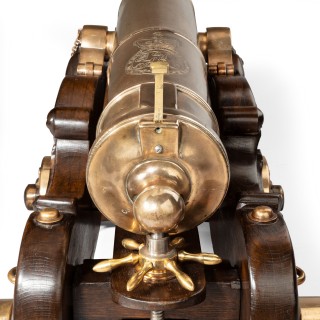 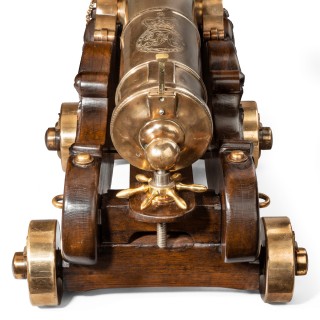 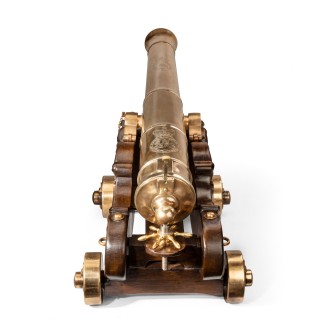 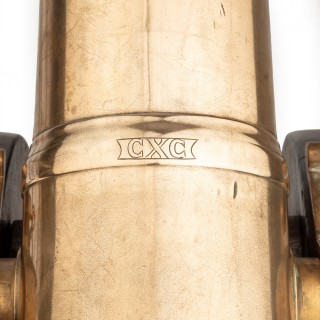 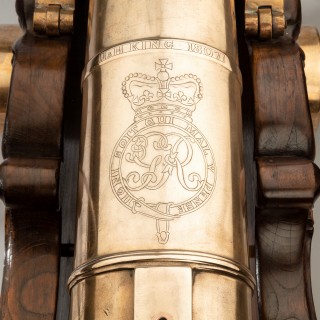 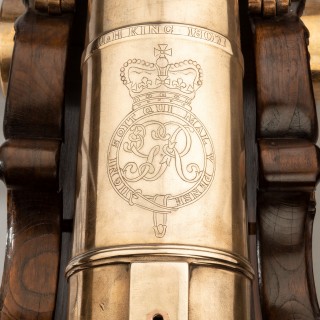 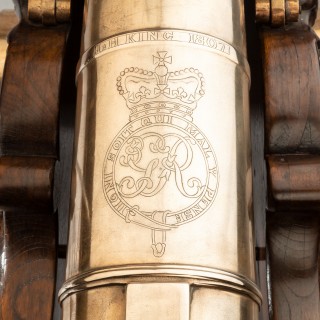 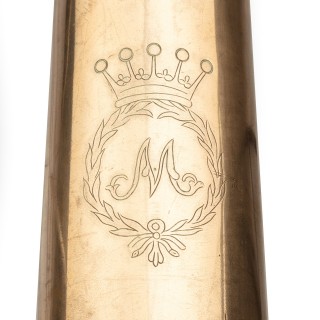 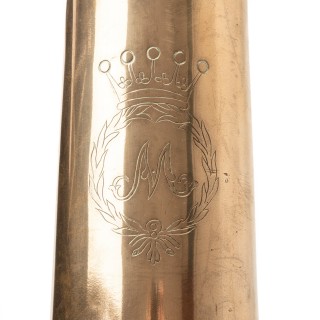 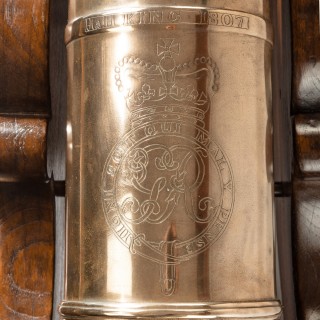 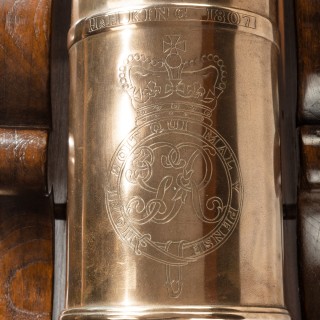 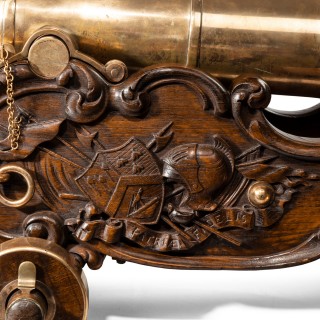 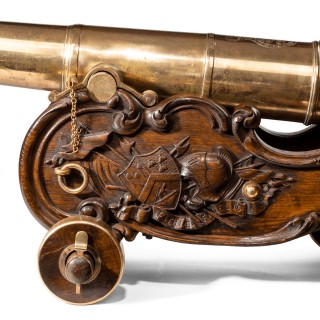 A pair of bronze cannon at the Battle of Waterloo

These 3-pounder cannon were cast at the Royal Woolwich Brass Foundry, by I.H. King. Each is engraved on the first reinforce with the royal monogram of King George III and the chase with the cipher of Francis, 2nd Earl of Moira, Master General of the Ordnance, 1806-1807. The first reinforce ring is also engraved with the names of the founders and date, I & H King, 1807 . One is numbered CXC 144, the other CXC 190. The cascabel is drilled for a centre rear sight and is marked with the weight 3-0-0. There are loops for an elevating screw below the button and an elevation scale is engraved on both sides of the breech. Originally mounted on a field carriage for battle, together with a limber and other accoutrement, the guns were later remounted on naval ships’ carriages made of carved teak showing a crest containing bees, pole-arms and a yacht as they were purchased by Robert Ashton with his yacht, Minerva . Carriages later. English, 1807.

These rare guns are two of only a handful of 3-pounder guns cast during the short months when Francis Rawdon Hasting, 2nd Earl of Moira, held the office of Master of the Ordnance, 1806-1807. The Royal Armouries at the Tower of London, holds two similar guns from the same period (5 guns later) see H.L. Blackmore’s book “The Armouries of the Tower of London” page 84. Original documents from 1807 located at The National Archives, London, and listed in the Order Book from The Board of Ordnance to the Royal Woolwich Brass Foundry, show that the cannon were commissioned either (as per entry on 12th January 1807) for The Royal Artillery (Field Train at Woolwich) – present at the Battle of Waterloo or (as per entry 11th June 1807) for the King’s German Legion – Hanoverian Regiment –using 3- pounders also at the Battle of Waterloo. 3-pounder guns were also used as light artillery in the Peninsular War (in which The Duke of Wellington took part). Given the recorded movements of both of the regiments concerned, and the fact that both were involved in the battle at Waterloo, it is likely that the cannon would have been present.

Even with such important and expensive guns such as these, there was no established method for disposal after decommissioning. Examples of provenanced field ordnance in public collections are known to have been given to the families who sponsored their production and, likewise, there are recorded examples of such pieces having been given as a reward to the commanding officers of the regiments concerned. Although not definitively established, it is possible, given the recorded later history of the cannon, that they were gifted to Henry William Paget, 1st Marquess of Anglesey and Earl of Uxbridge (17 May 1768 – 29 April 1854). Paget was commander of cavalry at Waterloo where he famously lost a leg to a cannon blast on the 16th of June 1815. Remarkably he survived his amputation and his leg was exhibited as a grisly tourist attraction in the village of Waterloo for some time afterwards. Although Paget’s will, preserved in the National Archives, does not mention the cannon specifically, it is probable that they descended to his daughter Lady Jane Paget, the wife of the 2nd Marquis of Conyngham (see pages 44 and 48). We are indebted Christopher Coles for his research into this piece.

A pair of bronze cannon at the Battle of Waterloo