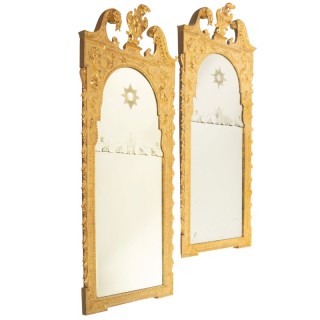 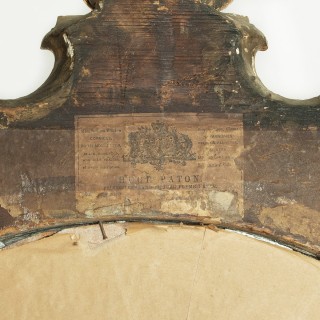 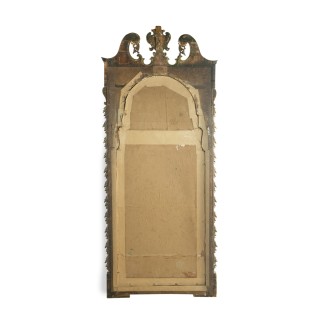 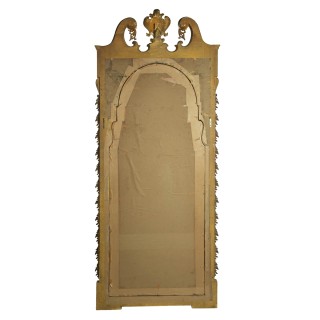 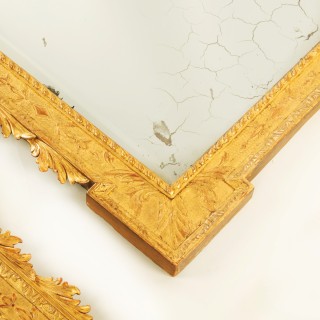 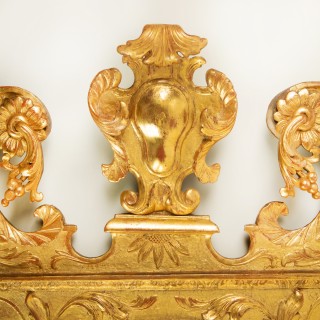 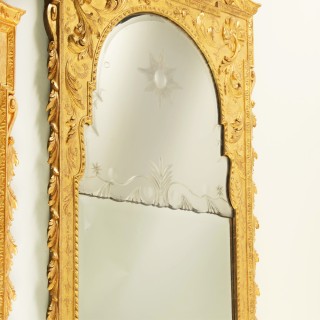 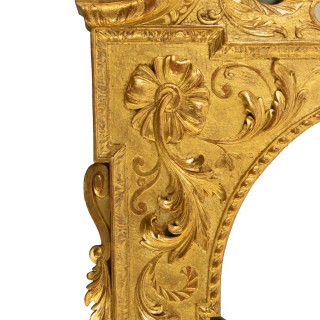 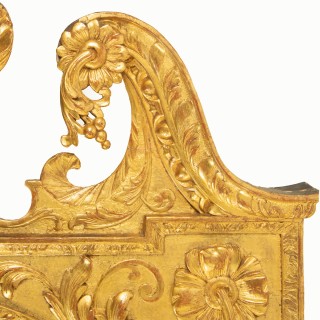 A pair of double plate giltwood pier glasses, one George 1 and the other made to match by George Paton carver and gilder to Queen Victoria

A pair of double plate giltwood pier glasses, one George 1 and the other made to match by George Paton carver and gilder to Queen Victoria, each with the original, probably Queen Anne, shaped and bevelled glasses, the upper plate arched and cut with a central Brunswick star above a border of scrolls along the lower edge, all within a gadrooned frame carved in high and shallow relief with pendant bellflowers and scrolling foliage issuing from flowerheads, the swan-neck pediment centred on a cartouche. One Georgian circa 1730 and the other circa 1840. The older one with a paper label stating ‘Hugh Paton, Printseller and Picture Frame Maker…Her Majesty’s carver and gilder’. English.

Footnote: The George I mirror, made c.1730, is an intriguing design that is based on the popular tabernacle shape that was a favourite of the Palladian designers in England such as William Kent and John Vardy. However, the way the slip inside the mirror is shaped indicates the Queen Anne period. This could be particularly significant as both plates in this mirror are original and may well have been re-used Queen Anne period plates. It was very common in even the grandest of homes to update mirrors by changing the style of the frame to suit the latest fashion whilst retaining and re-using the valuable mirror glass itself. This seems all the more likely with the present mirror due to the wonderful engraved Brunswick star and other designs on the top plate-again this form of decoration tends to be associated with mirrors from the William and Mary and Queen Anne periods and is almost always a sign of the highest quality as well.

Although it has not been possible to find any provenance for this particular pair of mirrors, we are able to make several educated guesses due to the label on the back of one of them. The label is that of Hugh Paton, a very important and well-known mid-19th century tradesman based in Edinburgh (see below for more details about his business). Paton advertised widely in the Scottish press and from 1842 onwards he began to use the phrase “Carver and gilder to the Queen”, later amended to “Carver and gilder to the Queen and HRH The Duchess of Kent”. Although the Paton business continued under the control of his son, Hugh Paton himself had died by 1867. Therefore, our mirrors must have passed through his hands before that point.

It was common practice for restorers to add their label to the back of pieces that they had worked on in some way and it is highly likely that Paton was asked to re-gild the George I mirror and then make a copy to match at the same time. The quality of the copy is quite remarkable and it is virtually impossible to tell the pair apart when viewed on the wall. Given Paton’s reputation and the location of his business, it is likely that the George I mirror belonged to a Scottish family of some prominence who then sought out the very best local gilder to work on their piece and make them a copy.

Hugh Paton and his Business

Hugh Paton’s business is recorded from 1827-1867, becoming Hugh Paton and Sons after his death in 1868 and flourishing until c.1892. During that time the firm occupied many different premises in Edinburgh including in Princes Street and Adam Square. Unfortunately, the relevant part of the label on our mirrors is damaged so we cannot say with certainty where the firm was based at the time that the mirrors were handled but, as stated above, the presence of the royal crest proves that the date must have been post-1842 and pre-1867 when the name of the firm was changed. As such, the firm would have either been based in Adam Square or at 10 Princes Street.

Although it was common for tradesmen and women of this period to have had multi-faceted businesses, Paton operated in a truly astonishing number of markets. A brief biography of the man is maintained on the Science Museum website as he won the contract in 1851 to print the timetables for all of the railway services leaving from Edinburgh and Glasgow. An advert in the Glasgow Sentinel on the 8th of March 1851 mentioned Paton opening new premises in Glasgow specifically to print these timetables and mention was made of the fact that he had received permission to run adverts in the timetable booklets. This is just one example of Paton’s enterprising nature. The same advert described his business as “Printer and publisher, picture frame-maker and print-publisher, carver and gilder to the Queen and her Royal Highness the Duchess of Kent”. Later in the same advert, Paton mentioned that he was taking orders for “window-cornices, room-mouldings, looking-glass frames and picture frames of every description which will be made to order”. He also offered a picture restoration and cleaning service and had a selection of bronzes, paintings, etchings, engravings, pier tables and items of papier mâché for sale according to other adverts of the period. In fact, Paton may well have been an important paintings dealer in the area at the time-an advert in the Edinburgh Evening Post and Scottish Standard printed on the 14th of April 1849 mentioned some of his latest purchases, made at important auction sales in England. These included “the Duke of Buckingham’s collection of miniatures, antiquities and the remainder of the paintings, from which he selected and purchased varied and numerous specimens by the Old Masters”. Artists represented in his stock at this point apparently included Albano, Ruysdael, Heemskirk, Sir Peter Lely, Sir James Thornhill and Murillo. Certainly, Paton’s work as a print publisher is very significant indeed and much has been written in specialist literature about his work in this field.

Hugh Paton and Son were awarded another royal warrant by the Lord Steward in 1886 as carvers and gilders, suggesting a long period of service to the crown. Research is ongoing in to the scope of any known commissions conducted for the royal family and hopefully more details about this fascinating craftsman and his extraordinary business will come to light. These mirrors are as interesting from a social history perspective as they are important as examples of fine mirrors of unusual transitional design.

A pair of double plate giltwood pier glasses, one George 1 and the other made to match by George Paton carver and gilder to Queen Victoria