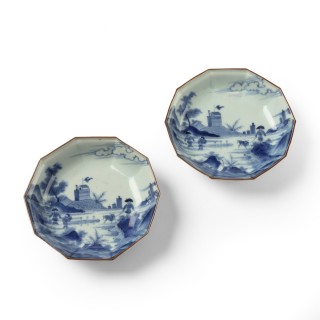 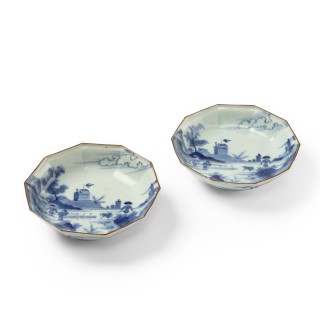 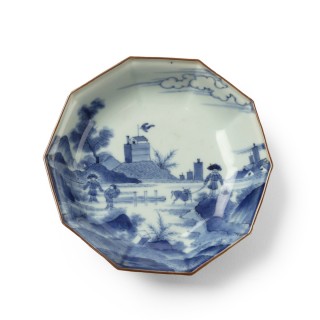 Each of these decagonal saucer-dishes is painted in underglaze-blue with a landscape of two Dutchmen and a boy warmly wrapped up and wearing large hats, two appear to be skating and one has a cow on a rope, in front of a hill fort flying a flag and the roofs of a town showing below the water line, possibly indicating the presence of dykes, the rims painted chocolate brown, the reverse with an underglaze seal mark and a paper sticker ‘Du Boulay Collection, P 297’ , one with a minor restoration. Japanese, circa 1700.

Anthony du Boulay was at Christie’s from1949 to1980 and Honorary Adviser on Ceramics to the National Trust, on the council of the Oriental Ceramic Society, chairman of the French Porcelain Society and of the DNHAS (Dorset County Museum). In one of his numerous publications there is an illustration of a very similar dish from the Ashmolean Museum ( John Ayers, J.V.G. Mallet, Oliver Impey, Anthony du Boulay and Lawrence Smith, catalogue, ‘Porcelain for Palaces: The Fashion for Japan in Europe 1650-1750’ , 1990. p113, fig. 67. An exhibition organised jointly with the British Museum in the New Japanese Galleries, 6 July to 4 November 1990). There is another in the Dr and Mrs. Roger G. Gerry Collection in the Metropolitan Museum, New York described as ‘Arita ware, Kakiemon type’ . Both these dishes have bracketed rims, probably influenced by silver dishes, whereas these examples have decagonal rims more in keeping with Kakiemon production. This design has traditionally been called ‘Scheveningen’ after a popular drawing by Frederick van Frijtom (1652-1702) of a fishing village on the Dutch coast near The Hague.