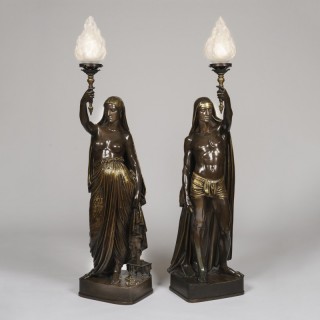 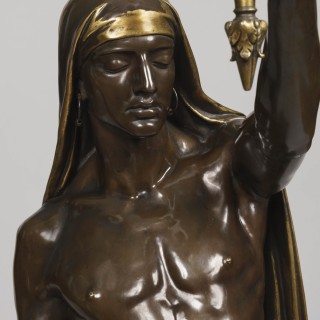 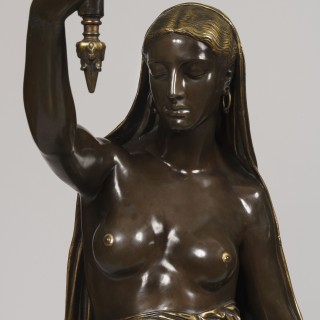 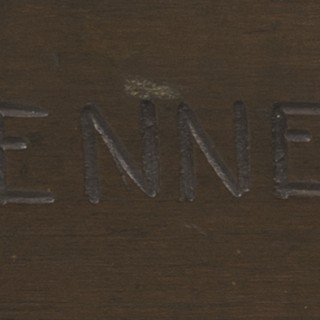 A Pair of Figural Porte-Lumières, Cast by Barbedienne from the celebrated Armand Toussaint Models

Constructed in bronze, and having a patinated natural, and a highlighted gilt patination, the male and female semi- clothed figures, standing on plinth bases hold aloft flambeaux. Each figure signed by the artist and dated 1850, and further inscribed F. Barbedienne.
French, Circa 1860

A pupil of the illustrious David d’Angers, he showed at the Paris Salon from 1836-1850, gaining medals of distinction, and later became professor of the École des Beaux-Arts, and was elected a Chevalier of the Légion d’Honneur in 1852. These figures were originally made in plaster and exhibited at the Salon in 1847, and the French state commissioned a pair in bronze for the Élysée Palace, which were shown in 1850.

Ferdinand Barbedienne and Achille Collas, who was the inventor of a machine that would mechanically reduce statues, started the F. Barbedienne foundry in Paris in 1838. At first they produced bronze reductions of antique sculptures of Greek and Roman origin. Their first contract to produce bronzes modelled by a living artist was made in 1843 when they arranged to produce the works of Francois Rude. They barely survived the revolution and financial collapse of 1848, which caused many artists and foundries to declare bankruptcy. Barbedienne actively pursued contracts with the many sculptors of Paris contracting with David D’Angers, Jean-Baptiste Clesinger, and even producing some casts for Antoine Louis Barye as well as others.

Achille Collas died in 1859 leaving Ferdinand Barbedienne as the sole owner of the foundry which by that time had grown to employ over 300 workers at their workshop located at 63 Rue de Lancry in Paris. Ferdinand Barbedienne was made the President of the Reunion of Bronze Makers in 1865 a post he held until 1885. The outbreak of the Franco-Prussian war in 1870 and the shortage of raw metals caused him to have to stop making sculptures but he did receive a contract from the French government for the production of cannons which kept his foundry open. After the war he resumed his casting of sculptures and put even more effort into signing contracts with various sculptors.

Barbedienne purchased 125 casting models from the late Antoine Louis Barye’s sale in 1876. He set about casting and selling editions of these sculptures which was very successful, devoting an entire catalogue to these works. Ferdinand Barbedienne died on March 21 1891 and was mourned by many in the world of sculpture. It was said that he strove to the highest quality in his castings Albert Susse said of him that he was the “pride of the nation” and that that he “carried the splendour of our industry so loftily to all international competitions”. The running of the foundry was taken over by Gustave Leblanc, a nephew, and continued the high standards set by M. Barbedienne. The foundry set up agencies in Germany, Britain, and the United States to market their production. Leblanc actively purchased models and production rights from sculptors including Auguste Rodin and the estates of sculptures including Emmanuel Fremiet. The foundry continued under the stewardship of M. Leblanc until 1952.

A copy of the Barbedienne catalogue of 1894 is in our possession, and shows these models illustrated, and costing the equivalent value of two years salary of a professional man- a very considerable sum.

A Pair of Figural Porte-Lumières, Cast by Barbedienne from the celebrated Armand Toussaint Models