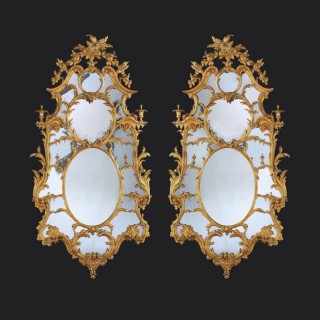 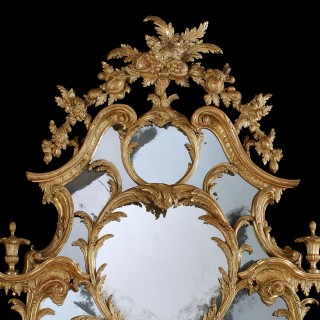 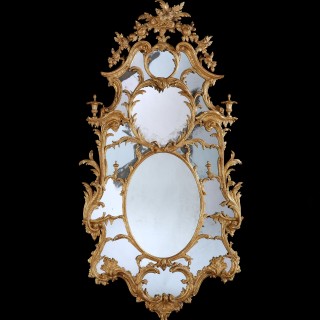 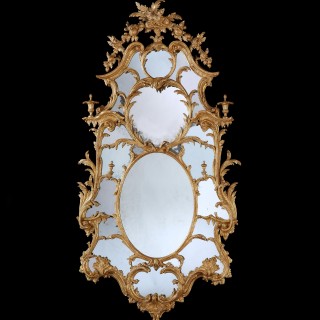 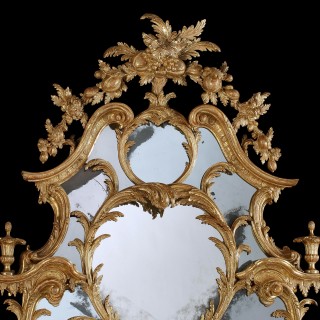 A Pair of George III Mirrors Attributed to John Linnell

Several formal features demonstrated in the pair of Methley Hall mirrors affirm the present attribution to Linnell. Alongside the masterful carving typical of Linnell, his leitmotifs included symmetrical c-scrolls, miniature urns, flowering baskets, and lovers’ bows which are all unified in this mature design of the great master.

John Linnell (1729-1796) and his father William (c. 1703-1763) were amongst the leading designers and craftsmen of furniture in the second half of the eighteenth century. They produced works of the highest quality and their reputation matched that of respected contemporaries such as Thomas Chippendale, John Cobb, John Mayhew and William Ince. Their clientele included Catherine the Great of Russia, Robert Childs of Osterley Park and the 1st Duke of Northumberland.

Several drawings by John Linnell, today in the permanent collection of the Victoria & Albert Museum, echo the design of the Methley Hall mirrors. A design for a pier-glass mirror for Sir Monoux Cope of Bramshill, Hampshire, dated circa 1755-1760 (V&A, E. 177 1929), bears a very close resemblance to the Methley Hall pair. One of the pair, after this design, sold Sotheby’s London, 12 February 1988, lot 77. Notably, the mirrors exhibit tantamount crests characterised by flowering baskets flanked by wreaths of leaves, broken swan-neck pediments and the terminating symmetrical c-shaped scrolling acanthus at the bottom of the mirrors. Equally fascinating, the original Linnell drawing suggests an organic rococo finish (particularly in the outer frame carving), which is more faithfully rendered in the Methley Hall mirrors vis-à-vis Sir Cope’s. This suggests a more mature development of the carver and designer throughout the 1750s-60s of which this pair is a great testament.

The Earl of Mexborough, Methley Hall

Methley Hall in Yorkshire has an illustrious history dating back nearly a millennium, its foundations dating back to the Norman Conquest. Over the centuries, a distinguished roster of owners, including Sir Lionel de Welles, 6th Baron of Welles (who was involved in the War of the Roses from 1455-1485), turned Methley into a fine manor house.

The Dymoke family, who hold the feudal hereditary office of King’s Champion to this day, inherited Methley before passing ownership to the Oxford-educated lawyer John Savile of Bradley (1546-1607). Savile was responsible for great renovations at Methley Hall, completed in 1593. In 1741, Methley was inherited by John Savile (1719-1778), the great great grandson of the original family owner. This Savile became the 1st Earl of Mexborough in 1766.

The 1st Earl of Mexborough, having travelled extensively on his Grand Tour while in his youth, decorated his country seat at Methley according to the latest tastes and displayed a vast collection of fine and decorative arts. It is during his lifetime, and ownership of Methley, that the pair of mirrors were commissioned from John Linnell. An inventory at the time of his death in 1778 records the mirrors as ‘Two large glasses with gilt frames.’

Like the vast majority of grand English country homes, the twentieth century foresaw the eventual decline of the manor and its grounds. Instability in the soil caused by mining practices in the vicinity, coupled with the detection of irreparable damage to the home, inspired the 5th Earl of Mexborough to move the family seat to Arden Hall, where it remains to this day. The fate of Methley was sealed when it was demolished in 1963. This instability throughout the twentieth century resulted in the sale of these mirrors.

A Pair of George III Mirrors Attributed to John Linnell