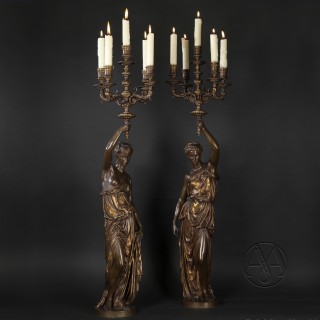 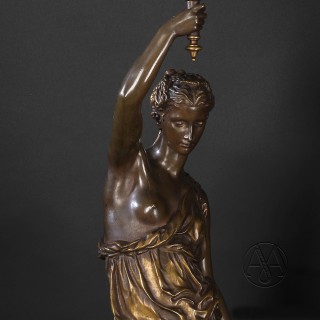 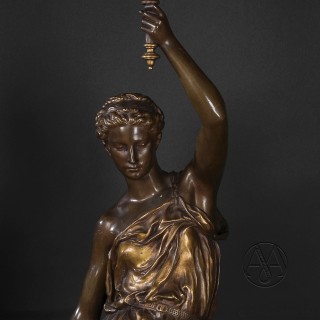 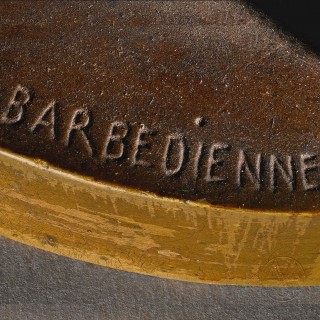 A Pair of Gilt and Patinated Bronze Figural Five-Light Candelabra

A Pair of Gilt and Patinated Bronze Figural Five-Light Candelabra Cast by Barbedienne after the Models by Alexandre Falguière and Paul Dubois.

Barbedienne illustrates a drawing of this pair of torchères on page 63 of his 1886 catalogue ‘Bronzes D’ Art’. He lists them under the heading ‘Deux Femmes Debout’ and describes them as ‘Porte-Lumières, style Renaissance’ also indicating that they were modelled by Paul Dubois and Falguière.

This model of candelabra was exhibited by Barbedienne at the 1867 Exposition Universelle and subsequently installed at the Château de Compiègne as part of the refurbishments undertaken by Napoleon III and Empress Eugénie.

Ferdinand Barbedienne (1810-1892) was a highly important and prolific bronze founder of one of the most important French art foundries. He pioneered the use of mounts and, more commonly, bronze sculpture including figures and animals. Barbedienne produced catalogues of bronze reproductions of Greek and Roman classical sculpture and experimented with champlevé and cloisonné enamels during the third quarter of the century.

The Barbedienne foundry employed up to three hundred skilled labourers, handling the casting of numerous national monuments and architectural schemes. Ferdinand Barbedienne himself also took an active part in the promotion of contemporary sculpture and became one of the founders for David d’Angers’ medallions as well as much of Rude’s sculpture.

In 1850 Barbedienne was commissioned to furnish the Paris Town Hall for which he was awarded with the Médaille d’Honneur at the Paris World Exhibition in 1855.

Paul Dubois (1827-1905) entered L’Ecole des Beaux-Arts in 1858. He exhibited at the 1865 Salon the Chanteur Florentin, inspired by his period of study in Italy and later exhibited this model at the Paris Universal Exhibition of 1867 (now preserved at the Musée d’Orsay). His success brought him many important public and private commissions including a portrait for the Duc d’Aumale and a statue of Joan of Arc at Reims. He was appointed curator at the Luxembourg Museum in 1873 and went on to become Director of the L’Ecole des Beaux-Arts in 1878.

Alexandre Falguière studied under Jouffroy at L’Ecole des Beaux-Arts, exhibiting for the first time at the Salon in 1857. He won the Prix de Rome in 1859 and continued to find extraordinary success at the International Exhibitions of the period including the Paris Universal Exhibition of 1867 where he won a first class medal. He was awarded the Ordre National de la Légion d’Honneur in 1870. As well as private commissions he undertook a number of important commissions for the French state. In 1878 he was asked by the state to realise the Triomphe de la République, placed in 1881 at the summit of the Arc de Triomphe (taken down in 1886). His most important international work was the Lafayette monument in Washington D.C.

A Pair of Gilt and Patinated Bronze Figural Five-Light Candelabra