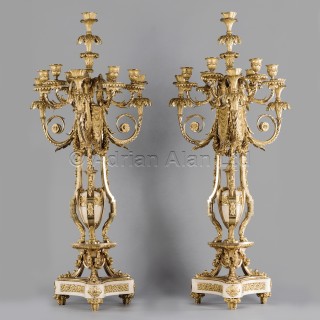 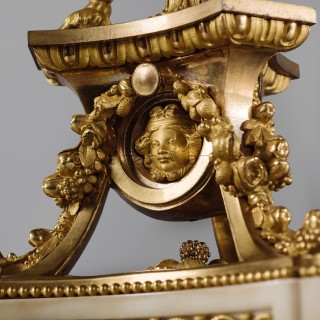 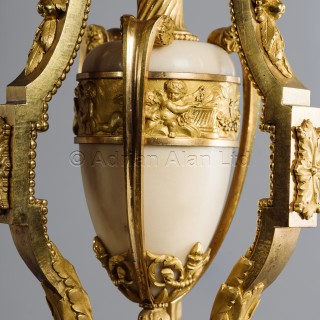 A Pair Of Gilt-Bronze And White Marble Ten-Light Candelabra

A Fine Pair Of Gilt-Bronze And White Marble Ten-Light Candelabra After The Model by Pierre Gouthière, by Henri Picard.

This fine pair of candelabra with marble urns, masks and scrolling candle arms is based on the celebrated model attributed to Pierre Gouthière which were supplied circa 1785 by the marchand-mercier Charles Darnault for the ‘Grand Salon’ or the ‘Salon du Jeu de Mesdames’ at Château de Bellevue. They are now in the Petit-Trianon at Versailles (P. Verlet, Les Bronzes Dorés Français du XVIIIe Siècle, Paris, 1987, p. 99, fig. 111).

The bronze is stamped variously with the initials “PP” for the important fondeur and doreur Henri Picard. A number of related gilt-bronze candelabra from this period have been found bearing both the ‘PP’ and ‘Picard’ stamp together.

The important fondeur and doreur Henri Picard worked in Paris from 1831 to 1884, most notably for the Emperor Napoléon III. He was based in Paris at 6 rue Jarente from 1831 to 1839, before moving to 10 rue de la Perle. The firm was active until around 1890.

Celebrated for the high quality of his production, Henri Picard supplied many important patrons, including garnitures and table pieces for the petits appartements of Emperor Napoléon III at the Louvre. An important pair of twelve-light candelabra by Picard remain in the Musée du Louvre today.

A Pair Of Gilt-Bronze And White Marble Ten-Light Candelabra