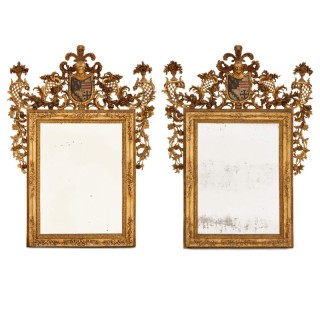 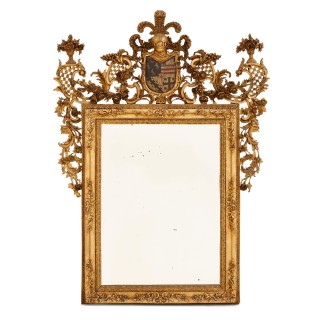 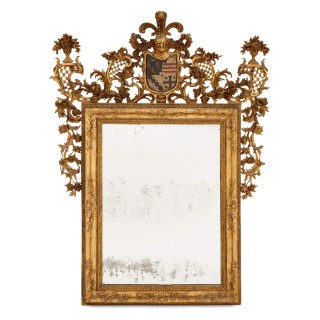 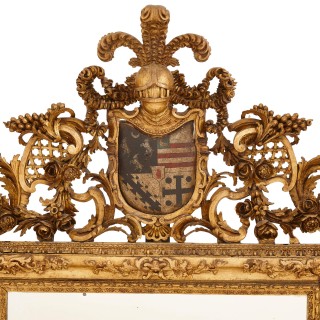 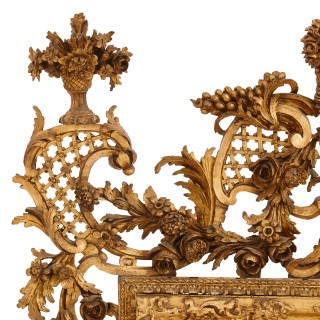 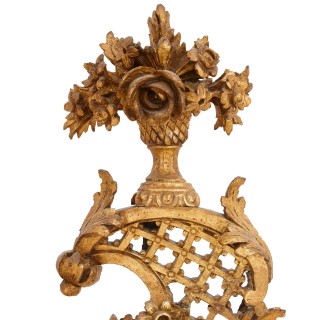 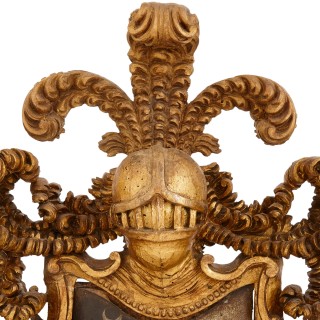 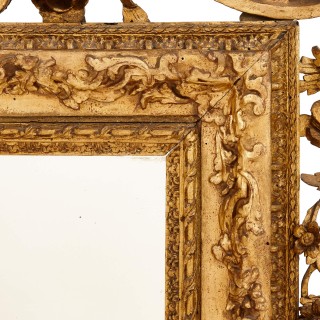 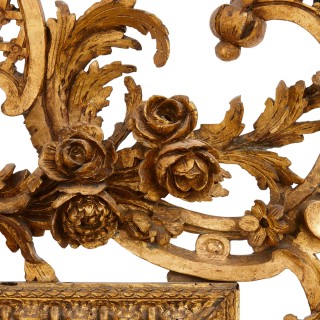 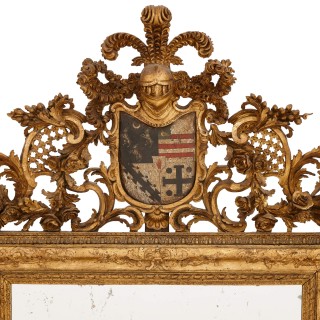 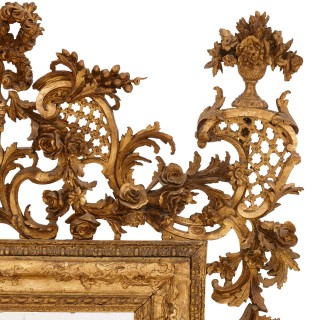 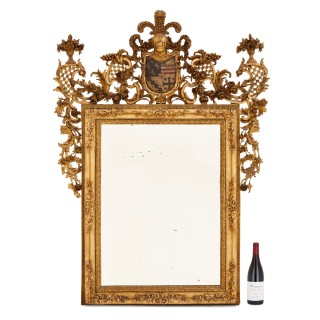 A pair of giltwood and polychrome-decorated antique Italian mirrors

Dating from Italy in the mid-18th century, these exceptional and rare mirrors are made from giltwood and feature polychrome decoration. A fine and important pair, each mirror consists of a rectangular plate set within a stiff leaf, entwined vine, and a fleur-de-lis carved surround. The cresting is centred by an armorial shield surmounted with a plumed helmet, and flanked by trellis with flower-filled vase finials, for the Thorold baronets. This in turn is set above scrolling vines and floral garlands. The pieces are labelled on the reverse ‘Proveniente della famiglia Dona dalle Rose.’ Hints of the original blue and white decoration can be seen.

The heraldic shields to the cresting of the present mirrors belong to the Thorold baronets, and almost certainly correspond to Sir Nathaniel Thorold (d. 1764). Thorold inherited the estate of Harmeston, Lincolnshire from Sir Samuel Thorold in 1738, and was created Baronet in 1740. He is said to have travelled to Italy in 1741 to escape his debts, and quickly amassed a fortune in Genoa before becoming a merchant in Naples. By 1749 he had built a villa on the island of Capri, where an 18th century correspondent noted he was ‘much respected by the whole island’; he died at Capri in 1764 (J. Ingamells, A Dictionary of British and Irish Travellers in Italy 1701-1800, New Haven and London, 1997, p. 938).

The Palazzo Dona dalle Rose, Venice, is a magnificent example of Renaissance Venetian architecture with well-preserved baroque ornamentation on the piano nobile, which was commissioned c. 1600 by Doge Leonardo Dona (d. 1612) and completed after his death. It is one of the last Venetian palaces still owned by descendants of the founder’s family. Part of the celebrated collection of the Palazzo was recorded in 1934 in a catalogue by G. Lorenzetti entitled ‘La Collezione Dei Conti Dona dalle Rose a Venezia’.

A pair of giltwood and polychrome-decorated antique Italian mirrors