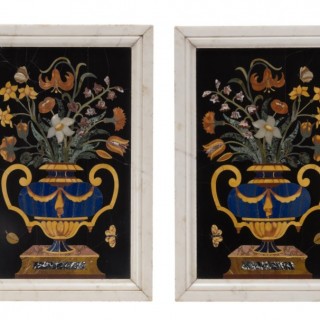 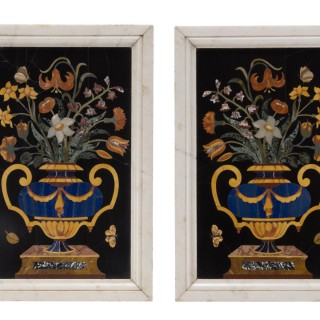 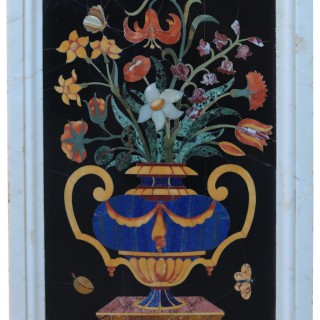 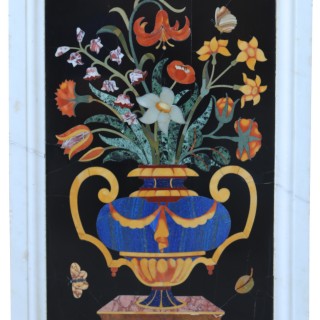 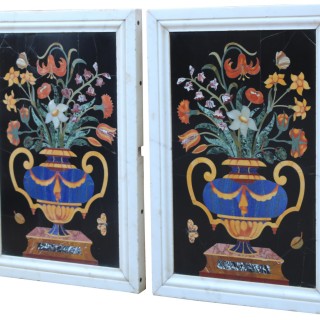 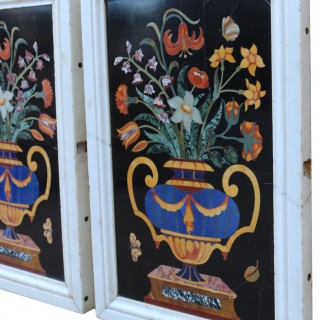 Provenance: Sir Frederick Arthur Gore Ouseley, 2nd Baronet (1825-1889), composer, organist, musicologist and priest, he was a precentor of Hereford Cathedral and Professor of Music at Oxford. In 1851 Ouseley travelled the Continent for nearly a year visiting many churches and cathedrals, including those in Florence, Siena and Rome, it was at this time he made plans for the building of a church. Ouseley founded the College of St Michaels’s at Tenbury in 1856, which was to set new standards in church music, he was both the patron and paid for the construction of the church and the connected college buildings.

Michael’s College closed in 1985 and Ouseley’s library is now housed in the Bodleian, Oxford. This pair of pietre dure panels are after a panel from the altar of Santa Giustina, Padua, created by the Corbarelli workshops and executed in the 17th century (See A. Giusti, emPietre Dure and the Art of Florentine Inlay, London, 2006, fig. 88/em). Similar types of vases can also be seen on cabinets dating to emcirca /em1610-20 such as the one with a view of Villa La Petraia, executed by the Grand Ducal workshops and housed in the Palazzo Vecchio, Florence (See A. Giusti, emPietre Dure – Hardstone Furniture and Decorations/em, London, 1992, pl. 37).