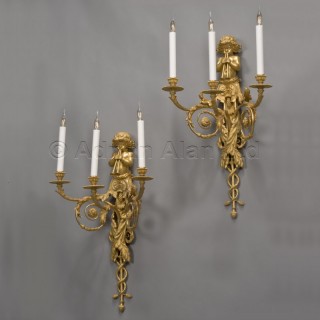 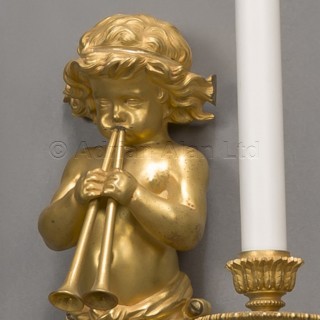 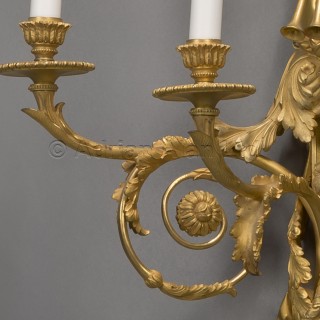 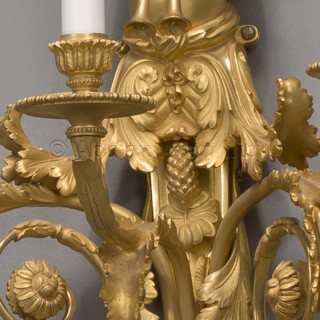 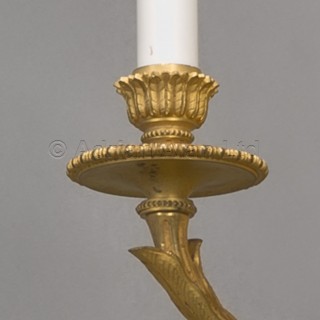 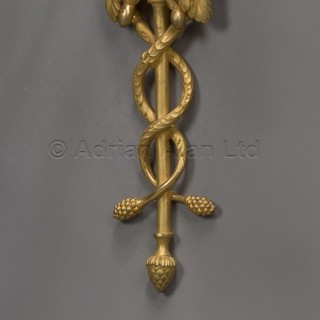 A Fine Pair of Louis XVI Style Gilt-Bronze Three-Light Wall-Appliques After a Design by Jean Hauré for the Château de St. Cloud.

Each applique has a backplate issuing three scrolling acanthus candle arms terminating in vase form sconces and circular drip trays. The back plate is surmounted by a putto playing pipes and terminates in acanthus leaves with foliate entwined thyrsus.

The design for this fine pair of appliques or wall lights, is based on the important 18th century model sculpted by the maître-fondeur ‘Jean Hauré’, cast by ‘Forestier’ and chased by ‘Thomire’ for the Château de St. Cloud.

In their book ‘Vergoldete Bronzen’, Hans Ottomeyer and Peter Pröschel note that this model of appliqué can be ascribed to Jean Hauré who delivered near identical works to the Garde-Meuble de la Couronne in 1787. Elsewhere it is noted that models of this design were cast by Forestier (either Pierre-Auguste Forestier (1755-1835) maître-fondeur-ciseleur or his brother Étienne-Jean Forestier) and chased by the esteemed ciseleur Pierre-Philippe Thomire (1751-1843) for the Château de Saint-Cloud.

Jean Hauré was a member of the Académie de St. Luc and became a maître-fondeur making furniture and gilt-bronze objets d’art for the Garde-Meuble de la Couronne from 1785-88. He is perhaps most noted for his work with Guillaume Benneman in the updating of anumber of commode originally made by Jseph Stöckel. He is also recorded as supplying a set of gilt-bronze appliques for Marie-Antoinette’s card-room at Compiègne, which were cast by Forestier and chased by Thomire. In his capacity as entrepreneur, Hauré also supplied other bronzes d’ameublement for the royal palaces such as a set of chenet that were delivered to Louis XVI’s Salon de Jeu at Fontainebleau in 1786.

Pierre-Auguste and Étienne-Jean Forestier, were from a family of bronziers who continued their father’s business after his death (Étienne Forestier c. 1712-1768) . The name Forestier frequently appears amongst the accounts of the Garde-Meuble de la Couronne during the latter part of Louis XVI’s reign. Amongst other commissions they created bronze ornaments for the stair rail in the Garde-Meuble building at Versailles and gilt-bronze decorations for Prince de Condé at the Palais Bourbon, 1779-80.