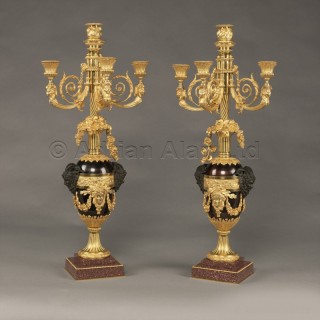 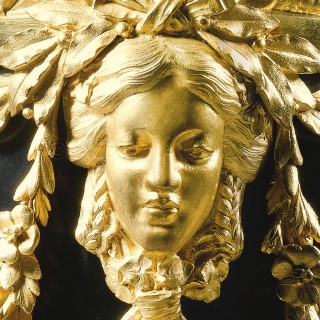 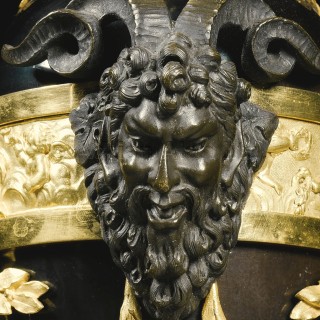 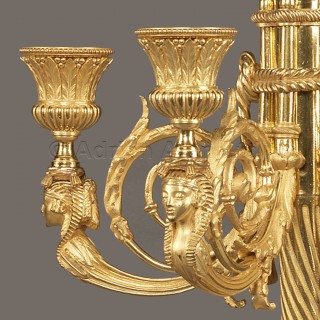 An Important Pair of Louis XVI Style Patinated and Gilt-Bronze Four-Light Candelabra After the Model by François Rémond, now in the Wallace Collection, London.

Stamped to one bronze ring ‘RG’.

Each candelabra has a central stem in the form of a torch en flambeau with three scrolling acanthus reeded branches terminating in sphinx heads and palm-leaf candleholders. The arms seemingly tied to the stem piece by knotted gilt-bronze cords ending in tassels. The candelabra are issued from patinated bronze ovoid vases with fluted stems and square section porphyry bases. Each vase is mounted with gilt-bronze female heads and foliate swags and encircled by a putti friezes. The handles of each vase are in the form of patinated bronze satyr’s masks.

This important pair of candelabra are after the model attributed to the ciseleur-doreur François Rémond dated 1782-5 now in the Wallace Collection, London. [F.134-5]. Peter Hughes, in his catalogue entry for the Wallace Candelabra, cites that the palm-leaf candleholders are of the same model as those on the celebrated Ostrich Candelabra supplied by Rémond in 1782 for the ‘cabinet turc’, the Comte d’Artois’ Turkish boudoir at Versailles, and that the candle branches conform to other known models of his work.

Many examples of Rémond’s work were commissioned by the marchand mercier Dominique Daguerre and it is possible that the Wallace Candelabra were such an order, with elements created by Rémond in collaboration with other fondeurs.

The ciseleur-doreur François Rémond (1747-1812), was a leading Parisian gilder and bronze caster during the second half of the 1700’s. He began his apprenticeship in 1763 with the doreur Pierre-Antoine Vial, and was elected maître on 14 December 1774. He worked principally for the marchand mercier Dominique Daguerre, although he was also employed directly by ébénistes such as David Roentgen and Jean-Henri Riesener and collaborated on some pieces with the bronze caster Pierre Gouthière, helping him on some of his larger projects. Rémond built up a successful business patronised by members of the French court, counting Marie-Antoinette, the Comte d’Artois, the Duc de Penthièvre and the Comte d’Adhémar amongst his principal patrons.