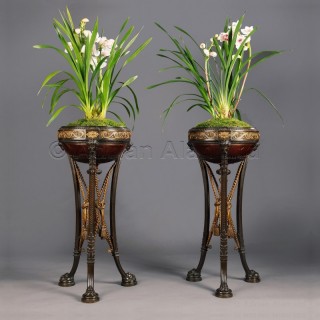 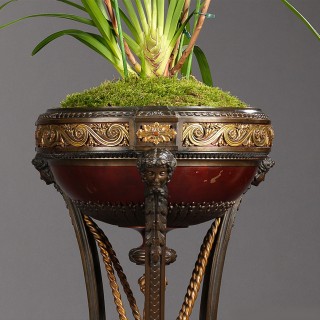 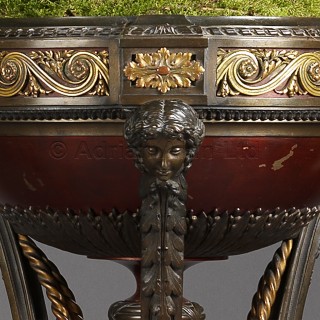 A Fine Pair of Napoléon III Gilt-Bronze and Patinated Bronze Athéniennes Modelled in the Classical Antique Style, Attributed to Barbedienne.

This fine pair of bronze Athéniennes or jardinières is modelled in the classical antique style with tôle basins and gilt highlighted, foliate, vitruvian scroll borders. They are raised on triple female-mask monopodiae tripod supports, with berried bosses and united by gilt bronze rope-twist stretchers.

The athénienne was a completely new, multifunctional type of French Neoclassical furniture used as a jardinière, washstand, perfume burner or brazier. It derived from classical antique forms, such as the ‘Isis Tripod’ found at Temple of Isis in Pompeii in the 1760’s, and from Olympic choragic tripod torches, such as the one that graced the Athenian monument to Dionysus, popularly known as the ‘Lanthorn of Lysicrates’. Once of the first recorded designs for an athénienne was by Jean-Henri Eberts, editor of ‘Le Monument du Costume’, first advertised in L’avant Coureur in September 1773. An example was supplied to Madame du Barry (1743-1793) at Louveciennes in 1774 and an athénienne after the design by Eberts, now resides in the Metropolitan Museum of Art, New York [1993.355.1]. The exceptional quality of the bronzes on this pair of Athéniennes would suggest the work of one of the most eminent fondeurs of the period.