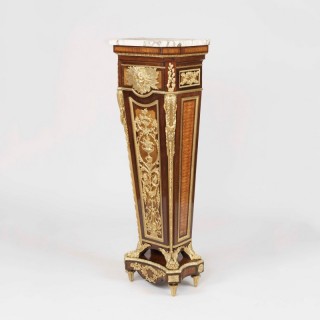 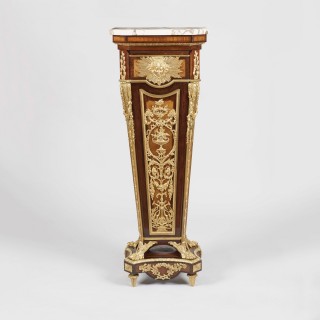 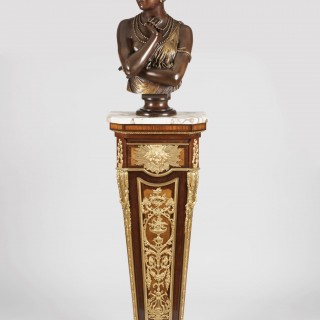 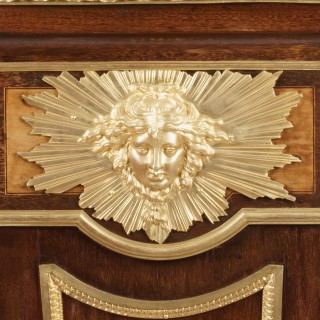 A Pedestal by E. Kahn of Paris

A Pedestal by E. Kahn of Paris
After a model by Jean-Henri Riesener

Constructed in the Neo-Classical manner in fine specimen woods and high quality ormolu work; the incurved base, rising from ormolu toupie feet and conforming claspwork, the tapering column has ormolu paw feet, conjoined with full length spandrels enclosing an urn within a complex framework of foliates, and musical instruments, with parquetry work in the side panels, an ormolu suburst of Apollo to the apron, and a shaped marble top. The reverse of the mounts with the maker’s stamp ‘Kahn’.
French, Circa 1890

E. Kahn & Cie. are recorded as being based in the Avenue Ledru-Rollin, in south east Paris, with a London branch in Charlotte Street, near Oxford Street, (with its’ many furniture makers and retailers) and a factory operating from Gough Street, Clerkenwell. Kahn were endorsed and approved of by the doyen of French 19th century cabinet makers, Francois Linke, who permitted Kahn to use an illustration of his award winning model of the Bureau du Roi in their catalogue. The company produced and sold faithful recreations of models by, Weisweiler, Stockel and Riesener amongst others. Our pedestal was originally designed and made by Jean-Henri Riesener (1734-1806), as a base for a floor clock, which now may be seen in the Louvre, Paris.

A Pedestal by E. Kahn of Paris