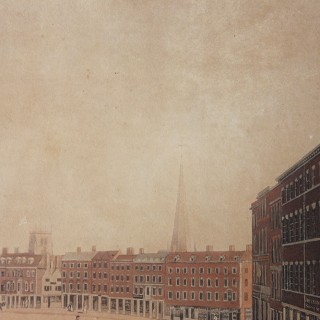 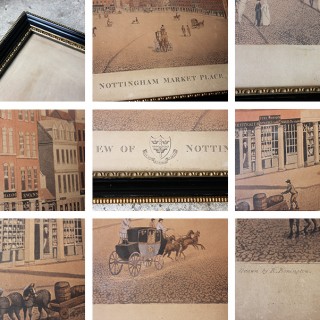 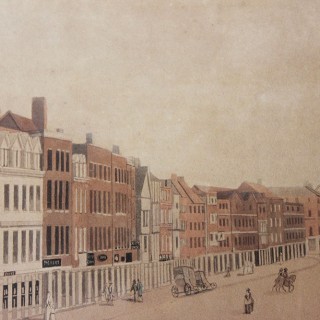 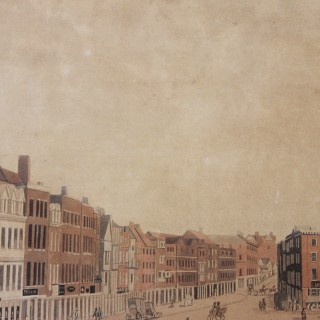 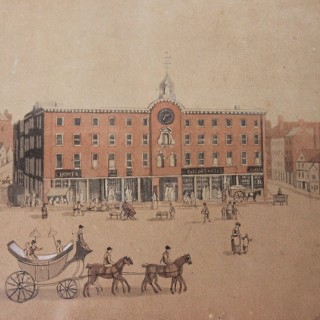 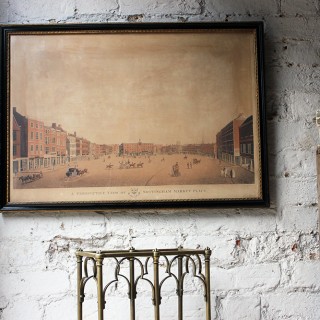 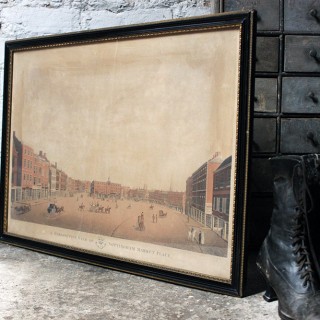 The aquatint and etching with hand-colouring published in August 1813 by Richard Parkes Bonington, of Nottingham and printed by Thomas Cartwright, depicting Nottingham market place bustling with figures, horses and carriages; with shop fronts on either side and in the centre, the work surviving from Regency period England and later mounted and glazed in an ebonised and gilt frame.

Richard Parkes Bonington (25 October 1802 – 23 September 1828) was born in the town of Arnold, four miles from Nottingham, which explains why he chose this marketplace as a subject. He [was an English Romantic landscape painter, who moved to France at the age of 14 and can also be considered as a French artist, and an intermediary bringing aspects of English style to France. Becoming, after his very early death, one of the most influential British artists of his time, the facility of his style was inspired by the old masters, yet was entirely modern in its application. His landscapes were mostly of coastal scenes, with a low horizon and large sky, showing a brilliant handling of light and atmosphere. He also painted small historical cabinet paintings in a freely-handled version of the troubadour style. In late 1828 his tuberculosis worsened and his parents sent him back to London for treatment. Sadly Bonington died of the condition on 23 September 1828 at 29 Tottenham Street in London, aged only 26, and there were many copies and forgeries of his work made in the period immediately after his death.

Nottingham was a prosperous, expanding town in the early 19th century. It had some fine public buildings and an unusually spacious market place. The market was long established. Travelogue author Celia Fiennes visited the town in the 1690s, writing: “The Market Place is very broad – out of which run 2 very large streets”. In the 1720s, Daniel Defoe wrote: “As there is a fine market-place, so is there a very good market, with a vast plenty of provisions, and those of the best sort, few towns in England exceeding it’.

Beautifully executed with a real understanding of proportion, atmosphere and the relationship between the empty chasm of the sky and the busy scene below it; this is so gloriously Georgian.

The engraving is in good, well preserved condition. There some slight toning to the work though it has not been meddled with in any way shape or form, please see the photographs for visual reference. The frame appears to be late nineteenth or early twentieth century and compliments the work nicely, the frame being in good overall order with one or two small losses.