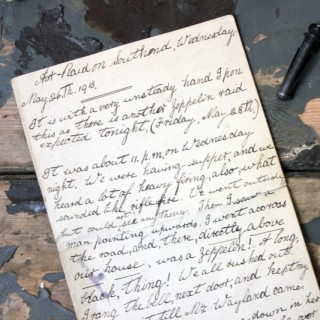 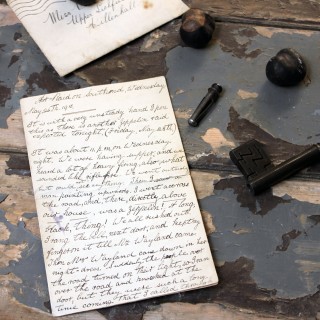 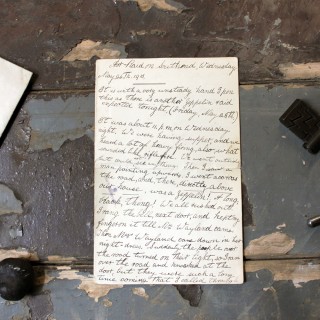 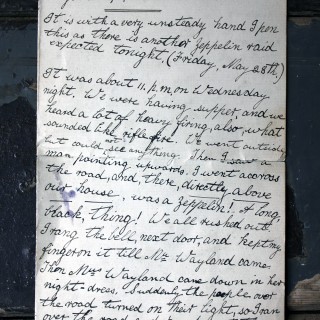 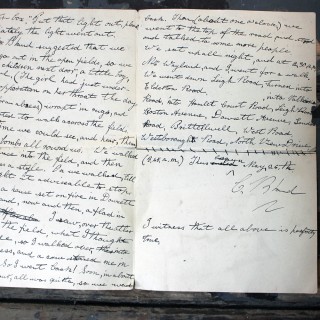 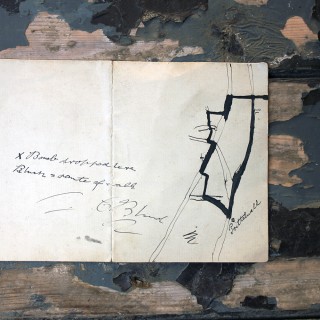 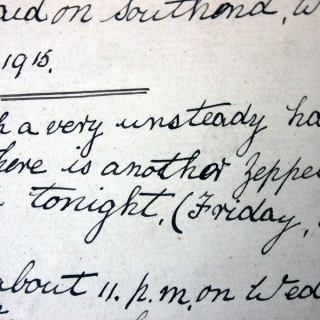 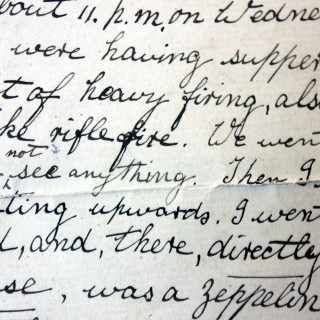 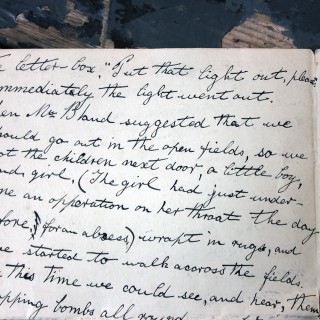 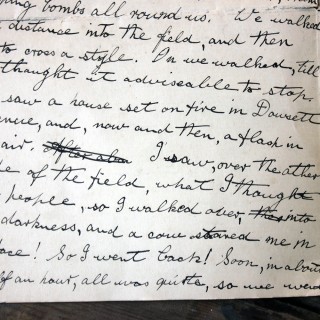 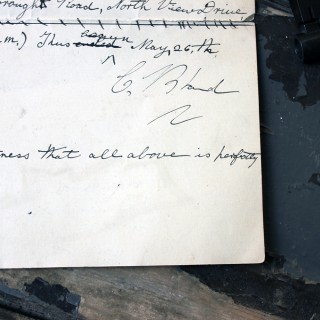 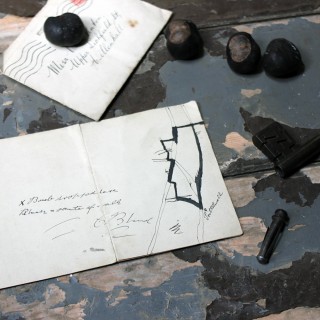 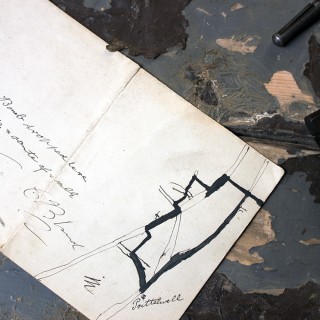 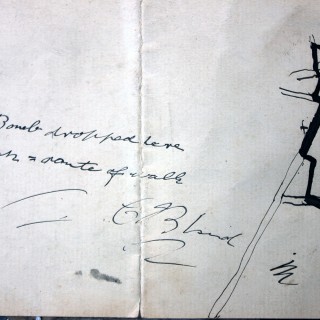 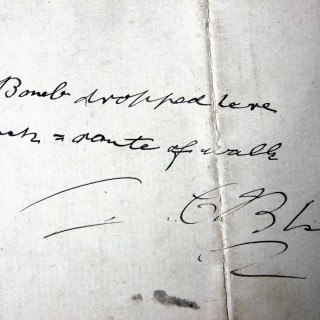 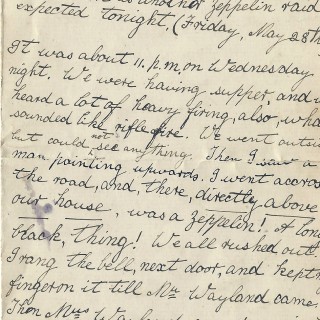 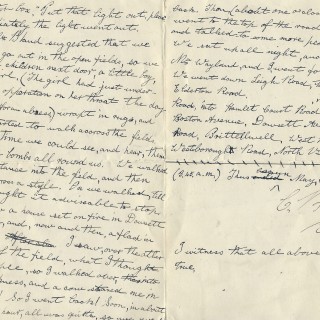 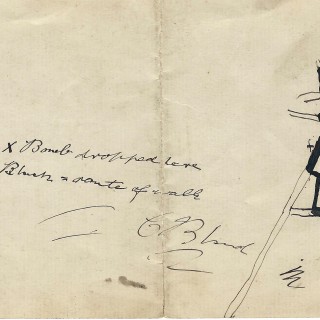 A Poignant WWI Period Hand-Written Account of May 26th 1915; Relating to a Zeppelin Air-Raid

The incredibly powerful and moving hand-written eye-witness account, consisting of four sides of good quality note paper, written during World War I in Southend, England on May 26th 1915 and penned by C.Bland, the shaky script detailing a Zeppelin raid (LZ38), and the immediate steps taken to prevent loss of life.

The note in full reads;

It is with a very unsteady hand I pen this as there is another zeppelin raid expected tonight, (Friday May 28th).

It was about 11.pm. on Wednesday night. We were having supper, and we heard a lot of heavy firing, also, what sounded like rifle fire. We went outside, but we could not see anything. Then I saw a man pointing upwards. I went across the road, and, there, directly above our house, was a zeppelin! A long black thing! We all rushed out! I rang the bell, next door, and kept my finger on it till Mr Wayland came. Then Mrs Wayland came down in her night-dress. Suddenly the people over the road turned on their light, so from over the road and knocked at the door but they were such a long time coming that I called through the letter box; “put that light out please immediately, the light went out. Then Mr Bland suggested that we should go out in the open fields, so we got the children next door, a little boy, and, girl (the girl had just under-gone an operation on her throat the day before for an abscess( wrapped in rugs, and we started to walk across the fields. By this time we could see, and hear, them dropping bombs all round us. We walked some distance into the field, and then had to cross a stile. On we walked, till we thought it advisable to stop. We saw a house set on fire in Dowsett Avenue, and, now and then, a flash in the air. I saw over the other side of the field, what I thought were people, so I walked over, into the darkness and a cave stared me in the face! So I went back! Soon, in about half an hour, all was quiet, so we went back. Then, (about one o’clock) we went to the top of the road and stood and talked to some more people. We sat up all night, and at 2.30am Mr Wayland and I went for a walk. We went down Leigh Road, turned into Elderton Road, into Valkourie Road, into Hamelt Court Road, Leigh Road, Bostoin Avenus, Dowsett Avenue, London Road, Brittlewwll, West Road, Westborough Road, North West Drive… (3.45 am) Thus began May 26th. C. Bland.

I witness that all above is herefully true.

By the start of the First World War the German Army had seven military Zeppelins.

The Zeppelin developed in 1914 could reach a maximum speed of 136 kph and reach a height of 4,250 metres. The Zeppelin had five machine-guns and could carry 2,000 kg (4,400 lbs) of bombs. In January 1915, two Zeppelin navel airships 190 metres long, flew over the east coast of England and bombed great Yarmouth and King’s Lynn. The first Zeppelin raid on London took place on 31st May 1915. The raid killed 28 people and injured 60 more.

Many places suffered from Zeppelin raids included Edinburgh, Gravesend, Sunderland, the Midlands and the Home Counties. By the end of May 1916, when this account was written, at least 550 British civilians had been killed by German Zeppelins.

Zeppelins could deliver successful long-range bombing attacks, but were extremely vulnerable to attack and bad weather. British fighter pilots and anti-aircraft gunners became very good at bringing down Zeppelins. A total of 115 Zeppelins were used by the German military, of which, 77 were either destroyed or so damaged they could not be used again. In June 1917 the German military stopped used Zeppelins for bombing raids over Britain.

The LZ 38 was the zeppelin that is mentioned in this account. This aircraft also attacked Dover and Ramsgate on 16–17 May, before returning to bomb Southend on 26–27 May. These four raids killed six people and injured six, causing property damage estimated at £16,898. Twice Royal Naval Air Service (RNAS) aircraft tried to intercept LZ 38 but on both occasions it was either able to outclimb the aircraft or was already at too great an altitude for the aircraft to intercept; the B.E.2 took about 50 minutes to climb to 3,000 m (10,000 ft).

Southend was often used by the German bombers as a dumping ground for their bomb loads during the war if their primary target was not possible to hit there too many of these incidents to list. There were 1236 Air Raid Warnings.

Southend had little rest before the return of the Zeppelins on the 26th May 1915 as this account details, and again it was the LZ38 commanded by Linnarz the mission was originally to find a safer route to bomb London. The Zeppelin was first sighted of Clacton at 10:30pm it then turned to go over Southminster where anti-aircraft gunners opened fire.

The craft then turned South and headed for Burnham-on-Crouch, before passing over Shoeburyness, the local 3inch naval guns opened up on the LZ38 which continued on to Southend. The raid saw some 70 bombs being dropped resulting in three fatalities and three seriously injured though damage to builds was light.

The Zeppelin then turned to head back over Shoeburyness, when the 3inch navy guns opened up on it once again, the airship carried on its route to pass again over Burnham-on-Crouch before the ground guns picked it up again and opened fire.

Upon reaching the mouth of the River Blackwater LZ38 turned out to sea avoiding the five RNAS fighters that had taken off to intercept. Two of the fighters were involved in serious landing accidents.

Now officially an antique document, this rare survivor is an incredible piece of social history, penned with genuine fear, making our current troubles with Covid-19 seem a mere inconvenience.

The note is most importantly intact and fully legible. It is understandably delicate and is slightly torn to the folds.

A Poignant WWI Period Hand-Written Account of May 26th 1915; Relating to a Zeppelin Air-Raid