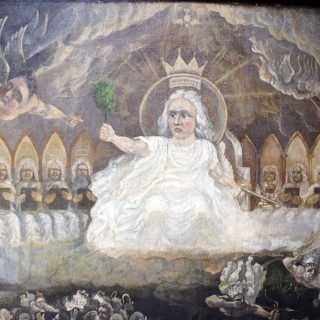 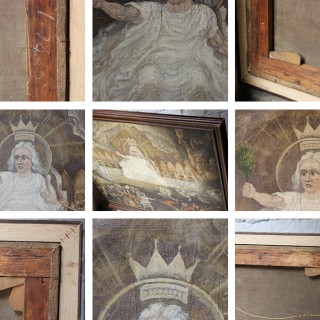 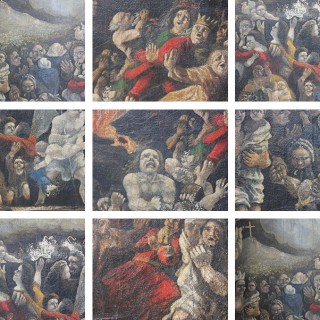 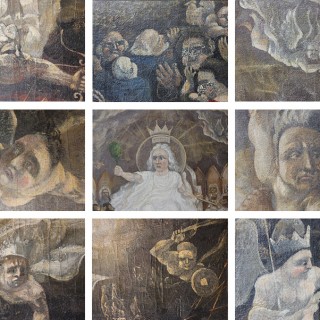 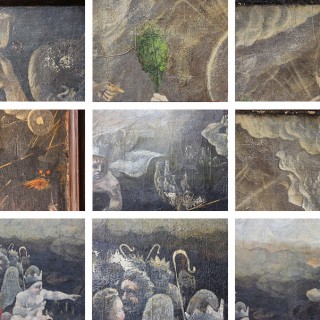 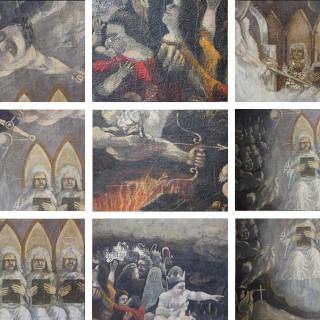 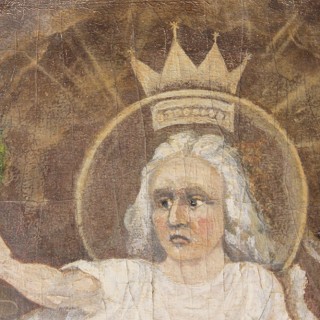 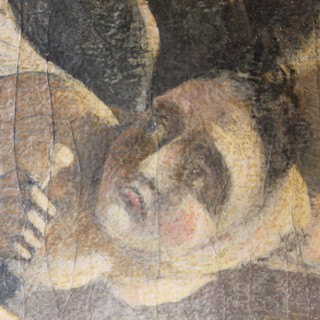 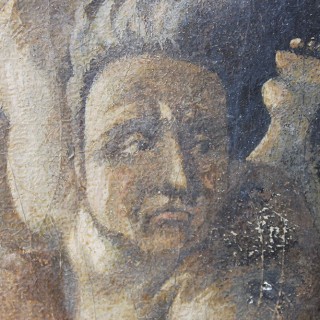 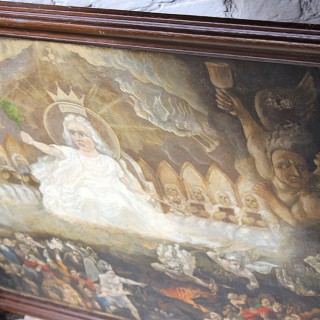 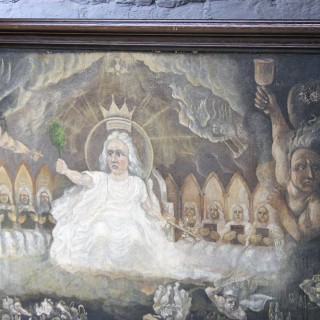 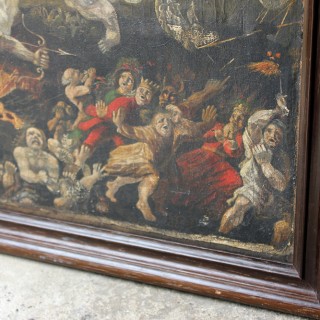 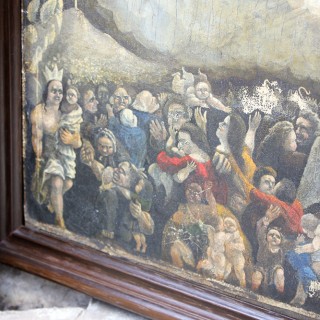 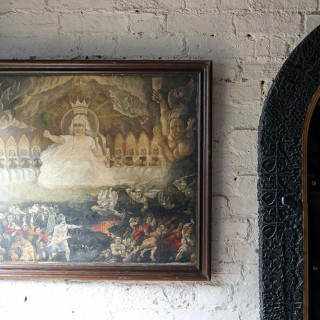 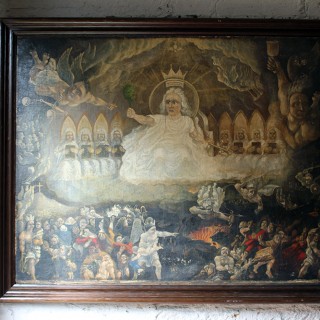 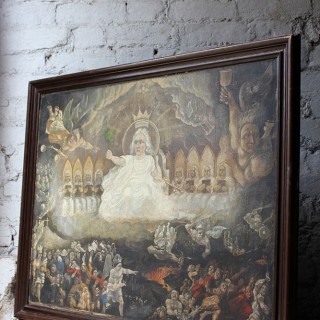 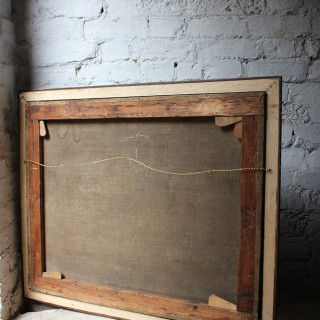 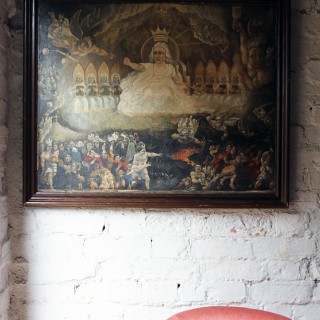 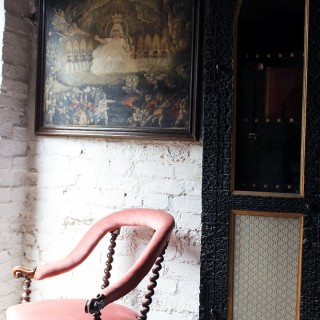 A Quite Magnificent 18thC English School Oil on Canvas; The Last Judgement c.1790

The wonderfully depicted scene of the last judgement painted in oil on canvas, showing Christ on the Throne of Judgment with Heaven and Hell to each flank, the body of work busy with figures, iconography and symbolism, presented in a twentieth century oak frame, survives from late eighteenth century England.

In Christian theology, The Last Judgment, Final Judgment, Day of Judgment, Judgment Day, or The Day of the Lord, is the final and eternal judgment by God of the people in every nation resulting in the glorification of some and the punishment of others. The concept is found in all the Canonical gospels, particularly the Gospel of Matthew and The Last Judgment has inspired numerous artistic depictions.

This brilliantly executed work is displayed almost like a courtroom of opposing sides and judges and is centered around heavy iconography and symbolism, for example the angel holding the scales indicates the notion of weighing souls; ‘He was weighed in the hand of God, and was found wanting’ Daniel 5:27, and to the other flank the angel with the trumpets blaring is a signal that the judgment was to begin whilst the larger angel holds a goblet aloft, signifying truth. To the center, Jesus is shown wearing a crown and is holding the tree of knowledge aloft on a cloud with a multitude of incorporeal servants as he sits on the throne of judgment. To the lower section of the picture we see different interpretations of death with the bow and arrow readied to fire and the swords brandished to the one flank, the damned fleeing in desperation amongst fire and brimstone; “The dead shall come forth from their graves, and the demons rush from Hell”. To the other flank, the saved, embracing each other in relief, watched over by angels with shepherds crooks, with many innocent children shielded amongst them and the holy cross on the mountain beyond; “Then all shall see our Blessed Lord coming in the clouds of Heaven in great power and majesty surrounded by countless angels bearing His shining Cross before Him. He will separate the good from the wicked; He will welcome the good to Heaven and condemn the wicked to Hell.”

This beautifully dramatic and atmospheric picture has similarities in its style (partfiulary to the figures) to the romanticism work of William Blake who also created the painting ‘A Vision of the Last Judgment’ that was designed in 1808 before becoming a lost artwork. Blake, in his notes to A Vision of the Last Judgment, describes how his design is to work: “If the Spectator could Enter into these Images in his Imagination approaching them on the Fiery Chariot of his Contemplative Thought […] then would he arise from his Grave”

One of this pictures many strengths is the detail to the many figures facial expressions, each of varied nuances of pleasure and pain. The other beauty of this work is that one notices something new every time one looks upon it; make no mistake there is a huge amount of dexterity in the passages here.

“Then I saw a great white throne and him who was seated on it. From his presence earth and sky fled away, and no place was found for them. And I saw the dead, great and small, standing before the throne, and books were opened. Then another book was opened, which is the book of life. And the dead were judged by what was written in the books, according to what they had done.” (Rev 20:11–12)

Simply put, this picture is a breath-taking cauldron of mysterious and apocalyptic imagery that one can gaze at for hours on end.

The picture is ready to hang, with the canvas lined and presented in a 20thC moulded oak frame, which it suits given the busy nature of the picture. There are some condition issues to note to the canvas; there is paint loss around all edges and patches of old paint loss where paint has been stretched now filled in with white throughout the painting, particularly evident to the lower left in the crowd of people, the largest patch to the top edge of them measuring approximately 3cm across and also around the central figure, particularly to the right at the end his arm and to the first figure to the right. There is craquelure throughout, most obviously running as vertical lines throughout the painting. There is also a small indentation half way down the left side. Inspection under UV light revealed some light patches of flaring throughout, especially in the top right corner. The picture could perhaps be lightly cleaned and have some light restoration to further enhance it but it is perfectly presentable in this state.

A Quite Magnificent 18thC English School Oil on Canvas; The Last Judgement c.1790