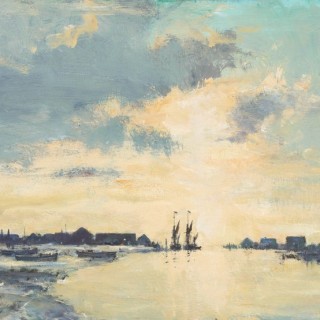 Medium: Mixed Media on Board.

James was born in Bolton in 1971. His obsession with drawing became apparent at an early age and like most from his generation, he remembers the many observational drawings of the ubiquitous Coke cans at High School. It was only with the discovery of automatism and pareidolia that this style started to move slowly towards the expression he is renowned for. During his degree in Print Making at Leeds Metropolitan University (1991-1994), under the guidance of Phil Redford and Jack Chesterman, he nurtured his sensitivity for oil-based ink that eventually led to oil paint. His speedily produced monotypes, at this time, introduced the energy and gestural qualities which still feature in his landscapes today. Upon finishing his degree James spent a number of years working in various jobs and stints of travel, eventually settling again in his home town to establish a reputation for his unique vision. Since then, he has exhibited widely, won numerous awards and his work features in many private and public collections, including the Manchester City Art Gallery.